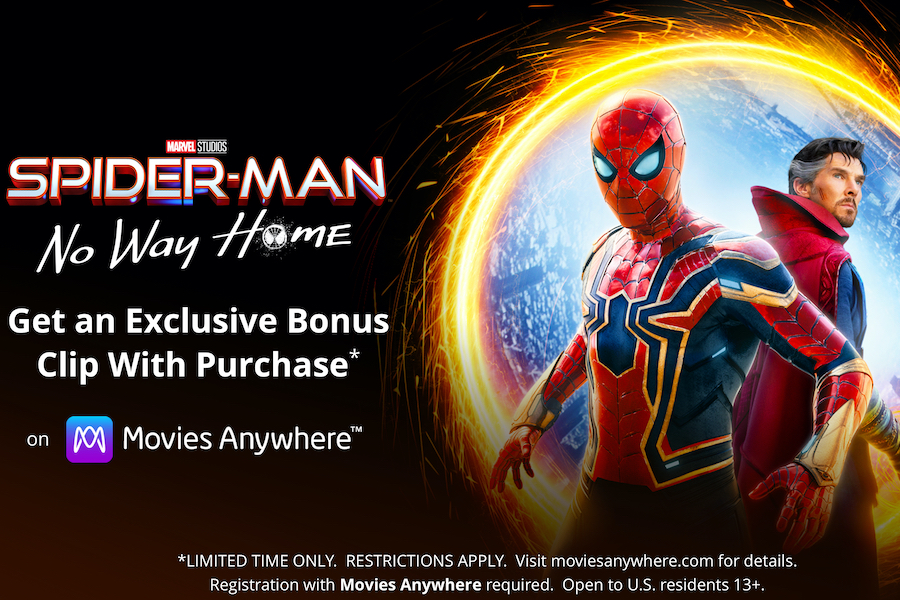 Digital locker service Movies Anywhere is offering an exclusive, never-before-seen Spider-Man: No Way Home bonus clip to consumers who purchase the Sony Pictures film from any retailer connected to the service.

The eight-minute bonus clip, titled “Spider-Man and the Multiverse in Marvel Comics,” can be unlocked through the Movies Anywhere platform. The clip features behind-the-scenes interviews with the film’s producers, including Marvel Studios President Kevin Feige and co-producer Chris Buongiorno, who talk about how the movie harkens back to the original comics.

The offer is good through April 11.

After purchasing the film, consumers will find the bonus content in the “My Extras” section of “My Movies” within the Movies Anywhere platform.

For the end of the year, a Movies Anywhere landing page is offering stats on consumer viewing habits in 2021.

Among titles, the most watched for the year was The Croods: A New Age, the most purchased was Free Guy; the most redeemed was Wonder Woman 1984; the most wishlisted was Black Widow; the most Screen Pass sent was Trolls, and the most searched was Harry Potter and the Sorcerer’s Stone.