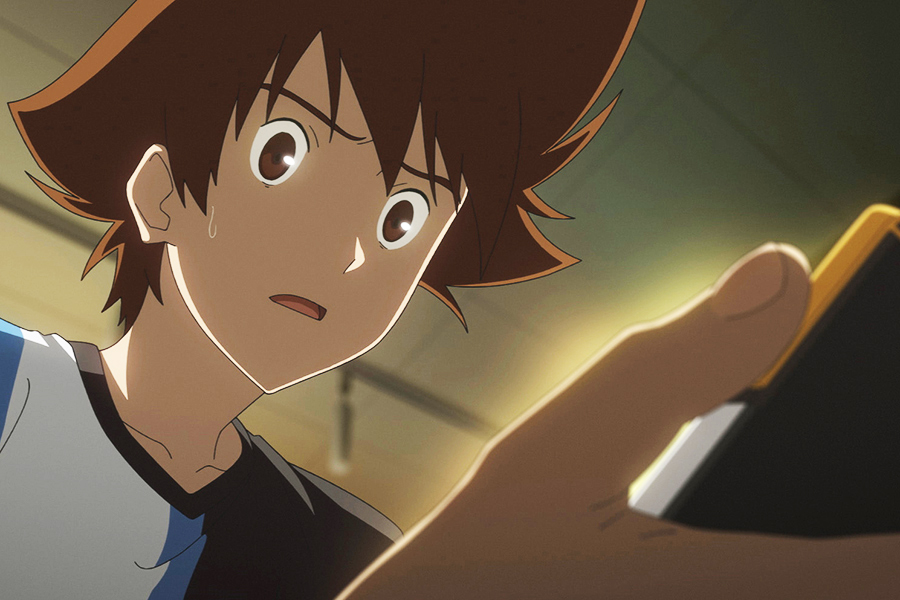 The popular “Digimon” anime franchise reaches a final chapter of sorts in Digimon Adventure: Last Evolution Kizuna, a new movie that wraps up 20 years of storylines from various series over the years.

Actor Joshua Seth, who voices Tai Kamiya on the English-language versions of the Japanese cartoon, thanks the fans for keeping the show alive for more than two decades.

“It’s the fans that stayed engaged, mostly through the Internet, and by watching it on streaming platforms like Hulu, and without their support the producers would never have invested time money or resources to creating new ‘Digimon,’” Seth said. “It’s been such a treat to have been able to play a character for such a long period of time, especially one that has depth and growth and changes over time like Tai.”

Created for a virtual pet game in the mid-1990s, Digimon is short for digital monsters, creatures from a parallel “Digital World” created by Earth’s communication networks.

The concept spawned the anime series “Digimon Adventure,” which debuted in 1999 and was licensed by Saban Entertainment to air in America on Fox Kids Network, where it became one of the channel’s most popular shows.

Produced by Toei Animation, the show focused on a group of children called DigiDestined chosen to protect the Digital World. Each child is paired with their own Digimon and given a device to evolve the creatures into stronger forms. Seth’s character of Tai was partnered with a Digimon named Agumon.

“I think the message of Digimon initially connected because it was ahead of its time,” Seth said. “If you think about season one, episode one of the ‘Digimon’ series, Tai’s sitting in a tree and his friends are all playing at summer camp when these digital devices dropped out of a cloud. And from then on it was a battle to find the balance between the Digital World and the real world. I mean that’s what ‘Digimon’ is really about, and that’s the battle that we’ve all been fighting ever since. But 20 years ago that was a concept that was really ahead of its time, and so I think the message of it resonated with people initially. And then they started to get hooked into the relationships of the characters.”

Seth, a voiceover veteran of several English-language versions of Japanese productions such as “Honeybee Hutch,” “Mobile Suit Gundam” and “Cowboy Bebop,” recalls not knowing much about the property when he first auditioned for the part of Tai.

“I really did not know anything about it. It was just another audition, and I probably had several auditions that day, just like every day at that time,” Seth said. “I remember going in and being surprised to see some people in the booth who I knew from working on other projects at Saban. So I immediately felt at ease because I worked with these people before and they knew who I was and what I was capable of.”

Seth had provided the voice of robot Alpha 5 at one point on Saban’s “Power Rangers.” But he drew inspiration for Tai’s voice from another source.

“There was very little in the way of text to read,” Seth said. “But there was a picture of Tai in sort of his fighting stance, and so I put my body in that physical position just like I saw in the picture, and because I didn’t have very much to go on I used my own voice. But just pitched it up a little bit to make him sound younger. I did notice however that the character description of Tai sort of mirrored Harry Potter, and the ‘Harry Potter’ novels had just come out, I think maybe only the first book had come out at that point, and I had read it out loud because as a voice actor I like reading out loud. When I teach voice acting to people I recommend reading out loud to get comfortable with their own voice and stretch it and know what it’s capable of. I had been reading ‘Harry Potter’ out loud with an accent, and I just dropped the accent and made him Tai, in my voice, with Harry Potter’s backstory.”

The show’s success led to Digimon: The Movie in 2000. The storyline continued in the “Digimon Adventure tri.” six-part film series first released in 2015 that depicted the characters in high school.

“Ever since ‘tri,’ ‘Digimon’ has dealt with more-adult themes, and at first it was surprising,” Seth said. “But then I soon realized what the producers had in mind was to age the characters and the themes and the whole tone and feel of ‘Digimon’ to reflect the fact that the audience has grown up as well.”

Digimon Adventure: Last Evolution Kizuna takes place five years after the events of “Digimon Adventure tri.” Nearing graduation, Tai and his friends learn that as they grow up, their bonds with their Digimon will eventually disappear.

“It just works because they have remained consistent over these past few movies with the idea that we’re no longer living in the world of Digimon as kids but as adults, and in fact that relates to the message of Kizuna, which is that we all have to grow up someday and nothing lasts forever. Change may be difficult but the best way to handle it is to accept it and not resist it, and that’s really what they’re giving us in that last movie.” 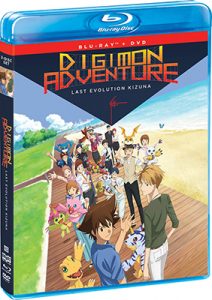 Digimon Adventure: Last Evolution Kizuna, with both English- and Japanese-language tracks, is available now for digital sellthrough, and arrives on Blu-ray Disc and DVD Oct. 6 from Shout! Factory. Extras include a retrospective featurette with Seth and Tom Fahn, who voices Agumon.

Seth said unlike many of the projects he works on, he became a big fan of “Digimon.”

“A lot of the shows that I voiced I never watched or a didn’t watch until a long time afterwards because I was too busy recording things and auditioning for things to go on watching them, but ‘Digimon’ was an exception because it was on the air every Saturday morning,” Seth said. “I would actually watch it in real time along with everybody else. And that was just thrilling, so yeah, I became a fan right away of ‘Digimon’ and remain so to this day, but now I do it through my kids because my kids are younger and they haven’t watched all of the Digimon catalog, but they’ve watched the first season, and they’ve watched the original movie, and a couple of the ‘tri’s I was able to watch with them in the movie theaters.

“I remember when my daughter first put it together she was about 5, and we’re in the movie theater and the movie’s playing, where I’m on screen at the beginning, that’s the moment where she put it together that it’s me doing the voice, and she stands up in the movie theater points to the screen and goes ‘Dada that’s you!’ She literally didn’t get it until then. But it’s been wonderful as a father to introduce my own kids to the ‘Digimon’ series and be a fan of it through their eyes and through their fandom. Tiger my son actually sleeps with an Agumon plushy every night.”

Seth said he also enjoys meeting other fans and seeing how the show has impacted their lives.

“I’ve gotten so many emails and just fans coming up to me at comic cons over the years and saying that Tai’s courage inspired them to be more courageous in difficult situations in their own lives,” Seth said. “I know for a fact that resonates with people.”

But his most memorable fan interaction was a bit more out of the ordinary.

“I was at a comic con in Australia a few years ago where a fan wanted me to sign her body so she could get a tattoo of my signature,” Seth said. “She actually did get the tattoo, even though I advised her strongly against it, so I was very careful to make the signature look good.”

As for his future with the franchise, Seth said that despite the sense of closure offered by the Kizuna, he would enjoy returning if a new iteration came along (a reboot of the original series has already begun airing in Japan and is available online).

“If the producers reach out for me to play Tai again I would gladly do so,” Seth said. 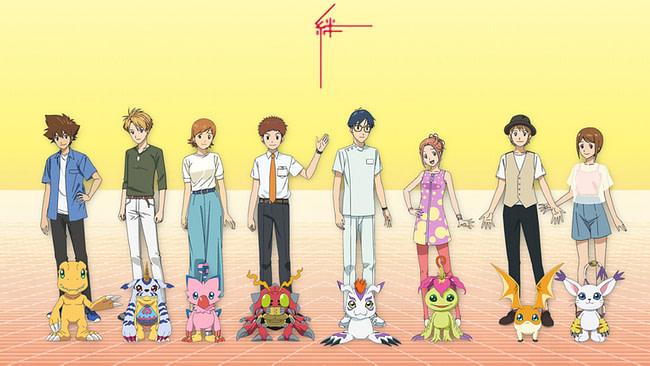 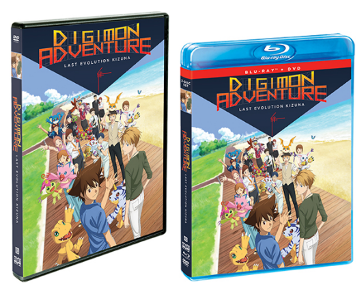 Celebrating the 20th anniversary of Digimon, the collector’s edition Blu-ray Disc + DVD combo pack is available now for preorder directly at ShoutFactory.com. It will be available digitally Sept. 29, and on DVD and Blu-ray Disc Oct. 6.

The film is set five years after Digimon Adventure Tri, which is set in 2010, and follows Taichi and his friends as they reach adulthood. They are struck with the news that the partnership with their Digimon will soon end and they will be forever separated, as they are not children anymore. Meanwhile, the powerful Digimon Eosmon appears, robbing other DigiDestined of their consciousness. Despite the little amount of time they have left together, it is up to Taichi, Agumon, and all their friends to fight together one last time to save the world.

Bonus features are currently in progress, and will be announced by Shout! Factory and Toei Animation in the coming months.