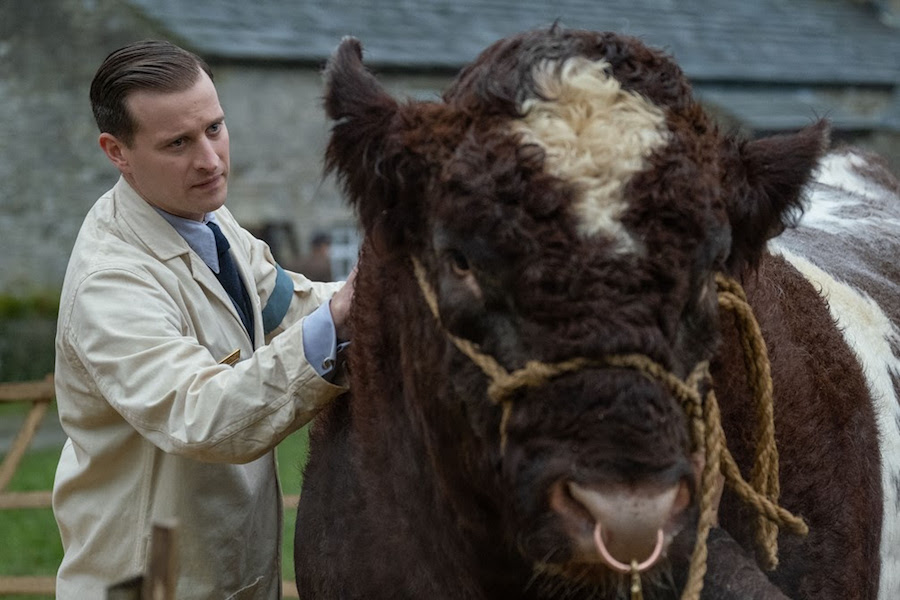 Four new “Masterpiece” programs and several international series will be streaming on the PBS Masterpiece Prime Video Channel in January.

“Masterpiece” titles include a new adaptation of “All Creatures Great and Small,” starring Dame Diana Rigg in one of her last appearances, the newest “Masterpiece Mystery” installment “Miss Scarlet & the Duke,” “Elizabeth Is Missing” based on the acclaimed novel starring Oscar-winner Glenda Jackson, and “The Long Song” based on the award-winning novel.

“Elizabeth Is Missing,” debuting Jan. 3, stars Jackson as the feisty grandmother Maud Horsham, a woman desperately trying to solve two mysteries as she declines ever deeper into dementia. Maud’s only friend, Elizabeth, ominously goes missing, leaving Maud determined to find her. The other mystery in Maud’s mind is a puzzle from her past, kindled when she unearths the top of an old cosmetics compact while gardening with Elizabeth. The discovery takes Maud back to her teenaged self and like many younger siblings, Maud looked up to her big sister, Sukey, considering her the height of glamour. This childhood idyll ended with Sukey’s failure to come home one night in 1949, never to be seen again. As Maud thinks back on it, she wonders if the family’s lodger at the time, Douglas, had anything to do with Sukey’s vanishing. And the cryptic warnings from the long-ago mad woman with the umbrella only deepens the riddle. In her increasingly disoriented perception, the disappearances of Sukey and now Elizabeth get mixed up. She attacks the problem with a system she uses around the house: sticky notes, posted everywhere, documenting daily reminders to herself — mostly about locking the door or turning off the stove, but also recording her meetings with Elizabeth and chance observations. Maud’s granddaughter, Katy, helps her arrange the notes. As memories, clues, and deductions pile up, viewers come to see the world as Maud does, and solve the mystery as this tenacious, vision-haunted sleuth does.

“All Creatures Great and Small,” debuting Jan. 10, is based on the autobiographical books by James Herriot and tells the adventures of a veterinarian in 1930s Yorkshire. The series takes place in 1937, when James Herriot, fresh out of Glasgow Veterinary College, follows his dream to become a vet in the magnificent Yorkshire Dales, one of England’s most beloved and beautiful landscapes. He soon discovers that treating the animals is as much about treating their owners, and the Dales’ farmers are a tough crowd to please. At Skeldale House, James gets to know his newly formed dysfunctional family: his chaotic and erratic boss Siegfried Farnon, his wayward brother Tristan and the shrewd Mrs. Hall, who is endlessly steering the ship. When local beauty Helen Alderson attracts James’s attention, he finds another, more enduring reason to stay in the Dales. The late Dame Diana Rigg plays Mrs. Pumphrey, the delightfully eccentric owner of the overly indulged Pekingese Tricki Woo.

“Miss Scarlet & the Duke,” coming Jan. 17, is set in the same 1850s London society that gave rise to Jack the Ripper. The Victorian detective drama features a fearless, independent heroine played by Kate Phillips (“Peaky Blinders”). With her inquisitive mind, Miss Eliza Scarlet has always been more interested in running her late father’s detective agency than behaving like a proper lady, much to the chagrin of family friend Inspector William Wellington of Scotland Yard (Stuart Martin, “Jamestown”). But nothing has prepared her for the dangers she is about to face as a woman in the murder investigation trade.

“The Long Song,” due Jan. 31, is an adaptation of the award-winning novel by Andrea Levy set during the final days of slavery in 19th century Jamaica. The story follows the strong-willed, young slave July on a sugar plantation owned by her odious mistress Caroline Mortimer. When a charming new arrival to the island, Robert Goodwin, becomes the new overseer, July and Caroline are both intrigued by his seemingly revolutionary determination to improve the plantation for the slaves and mistress alike.

“As Time Goes By: Reunion Specials,” available Jan 26, is the continuation to the long running series “As Time Goes By.” “Reunion Specials” follows up as Jean Pargetter’s (Dame Judi Dench) great anticipation for grandchildren is revealed much to husband Lionel’s (Geoffrey Palmer) dismay. With son-in-law Alistair and daughter Judy having problems things don’t look too promising. But will Jean’s dream of becoming a grandmother come true when their other daughter Sandy and her husband Harry return from Canada?

Also due in January are five “Walter Presents” series.

The French series “Walter Presents: Due North” is streaming starting Jan. 1. Set on the verge of the 20th century, “True North” is the untold story of the colonization of the Laurentian mountain rage in Quebec known as the “Wild West.” The series explores the turbulent period of the settlement and development of this northern region of Canada as the territory wreaks havoc on the new colony and an array of colorful characters try to make their mark

The German series “Walter Presents: The Nordic Murders” is coming Jan. 8. On the secluded island of Usedom off the north shore of Germany, former district attorney Karin Lossow has just been released from prison after serving a six-year sentence for shooting her husband. Her daughter Julia is the Detective Chief Inspector and their fragile relationship is put to the test as they team up to investigate criminal cases on the island.

The French-language series “Walter Presents: The Wall” is coming Jan. 15. In the remote Canadian mining colony Fremote, in the endless frozen hell that is the far North, the body of a young exotic dancer is found. The Quebec City police sends one of their toughest, most experienced detectives, Céline, to the colony to investigate. She is always up for a challenge. Being cooped up in the massive structure that is the colony which the inhabitants call “The Wall,” soon presents her with some challenges that exceed her investigative efforts. Not only does everyone here seem to have a secret and a connection to the victim, Céline’s own past has a way of catching up with her. Her estranged daughter Sophie has built a life of her own in the very same icy middle of nowhere where Céline is currently working. As Céline comes under increased pressure to find the killer of the dancer, she has to connect the dots to the suspicious death of a young boy three years ago. The inhabitants of the mine each think they know exactly who the culprit is, creating a sense of distrust and alarm among the community, but one fear is always present: will the murderer strike again soon?

Season three of the Italian series “Walter Presents: Rocco Schiavone” starts streaming Jan. 22. Deputy Police Commissioner Rocco Schiavone finds himself more and more alone, in the increasingly colder and inhospitable city of Aosta, forced to come to terms with everything that has happened. His best friend, Sebastiano, is under house arrest and refuses to speak to him as he’s convinced that Rocco had him arrested before he could kill Enzo Baiocchi, the man who murdered his wife. Rocco’s future doesn’t look great after Sebastiano escapes house arrest and everything in Rocco’s life starts to fall apart. It appears that he has no choice but to escape, leaving no trace of his whereabouts.

From the acclaimed novel by Louise Edrich comes the adapted historical German drama “Walter Presents: The Master Butcher,” due Jan. 29. After the social and financial destruction caused by World War I in Germany, a German butcher, and former military sniper, attempts to create a better life for himself and his family by moving to the United States. As the family struggles to acclimate to their new surroundings, many unexpected events occur, necessitating their plans and their lives to drastically adapt.