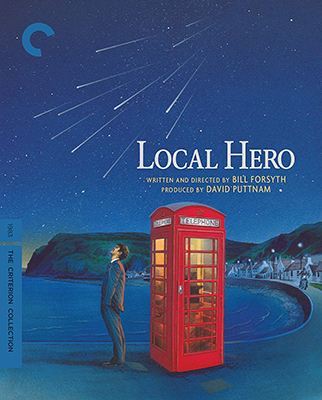 Better than any movie of its era, Bill Forsyth’s Local Hero comes closest to pulling off full-fledged whimsy — or at least, that’s what I thought in 1983 and up to about a week ago. But now, I can assert my huzzah without qualification because time indeed has been kind, and this deserving (but, to me, somewhat unexpected) Criterion release now seems like feel-good perfection without need of any “closest to” stuff.

Of course, as is noted in one of this release’s accompanying supplements (which are, as DVD Beaver’s Garry Tooze likes to say, “stacked”), there was some financial resistance to green-lighting this Houston-to-Scotland dose of chuckle bait at the time because everyone in it is so likable — the implication being that without anyone for audiences to hate, no one would come. Now, there’s a telling commentary for you on something, and one wonders if this would still apply to mass taste in 2019. Whatever the case, even this comedy’s potential villain — a CEO played by Burt Lancaster whose deep pockets want to turn a Scottish village into an oil refinery — is hard not to like. Part of this is due to the character’s compensating virtues and some is due to Lancaster’s trademark spectacular charisma, even in, as here, business attire.

Still basking a little in residual ensemble glory for his role in National Lampoon’s Animal House, Peter Riegert turned out to be a felicitously droll choice to play the ambitious company exec that Lancaster picks to negotiate the deal. Riegert’s assignment is due to the fact that with “MacIntyre” as his character’s last name, Lancaster’s assumption is that this guy must be Scottish, though it turns out that this was just another case of immigrant name-mangling when the former’s Hungarian ancestors came to America. No matter: Lancaster’s “Felix Happer” — how can any audience dislike a Felix? — keeps failing to recognize his underling on subsequent meet-ups, even though the two have shared a passionate conversation (at least on the boss’s side) about this corporate giant’s overriding passion: astronomy.

The central joke here is that the Scottish locals are assumed to be financial patsies when, in fact, they can probably negotiate a deal as well as Hollywood’s old-school finest could (think Lew Wasserman or Swifty Lazar). This is less a case of villager veins getting a fresh infusion of ice cubes every morning than of this supposedly unassuming populace being set in ways that sometimes stretch back centuries if you factor in inherited land holdings. On the other hand, the populace isn’t so adverse to change that enough green might not make them reconsider. There is one key holdout: He lives in a ramshackle pile of something that doesn’t even have a front door, so to gain entrance, visitors have to climb in through a window. In other words, he’s not exactly motivated by money.

A good filmmaker might come up with one idiosyncratic writing or directing “ping” to enhance a scene, but writer-director Forsyth, who at the time was coming off the sleeper success Gregory’s Girl, floods us with as many as Robert Altman did. They can come out of anywhere: hilariously set-up gags about the degree to which the Scottish point-person played by Denis Lawson turns out to be a professional jack-of-all trades; a humble village dance (guys playing the fiddle and all that) where a punker stands out as much as Pavarotti would have; divulgence of the true biological identity of a dreamboat marine researcher played by Jenny Seagrove; Lawson’s pragmatic or lackadaisical approach (take your pick) to wedded bliss when every negotiating tool is in play; and the escalating extremes in the actions of a certifiable nut job that Lancaster has hired to insult and even humiliate him at work. The last is likely over Felix’s inadequacies over having inherited the family business, which kept from marrying and otherwise fulfilling his own potential.

Local Hero has a couple secret weapons. One is the unbeatable score by Dire Straits’ Mark Knopfler, which captures both the comedy and the strain of melancholy that runs through the movie (Riegert’s character is lonely, too). To my surprise, because the score has a cult, it’s the one major component not really covered in the bonus section, though Fortsyth’s voiceover (with film critic Mark Kermode, who asks really good questions) does go on about Knopfler’s contribution at one point.

The other is the almost incalculable contribution of Chris Menges, who within four years of Hero’s release would win two cinematography Oscars (The Killing Field and The Mission). Usually, with whimsical screen material, one expects the premise, dialogue, comic situations and a deep bench of supporting players to carry the load. To be sure, all of that happens here, but this is also a movie laced by an underlying sadness, as well as one that deals substantially with the pull of the universe: bigger game, though it wouldn’t think of rubbing our noses in it. The imagery here is frequently thrilling and that’s not too strong a word. Menges even manages to elicit a substantial emotional kick from the manner in which he frames and lights a phone booth, which Criterion appreciated enough to make the structure the centerpiece of its cover art.

Menges rates his own nearly hourlong documentary in the bonus section, dealing with earlier works, which is instructional because they deal with films not widely known. My favorite extra, along with the Forsyth-Kermode voiceover, is a primer with how the picture came to be from inception through the ad campaign — an unusually specific fly-on-the-wall chronicle (Hero producer David Puttnam makes his one major appearance in this section) for which I can remember few screen precedents. As I keep asking with nearly every look at a Criterion release: How do the company’s sleuths keep finding the mausoleums where this stuff is buried? In this case, a lot of the material comes from the archives of Scottish TV.

One thing that wasn’t a factor in 1983 was the existence of You’ve Been Trumped, a 2001 documentary that everyone should have seen pre-election. With Forsyth’s fiction replaced by fact, though with meanness subbing for ultimate decency, it tells how Donald Trump high-pressured Scottish locals who wouldn’t sell him their land by turning the off their water as stacks of unwashed dishes piled up in their sinks. All so that he could build another of his golf courses for fat-cats and, presumably himself when he needed a spare place to shoot his standard 212 on the first nine holes before rewriting his scorecard.

Seeing Hero again made me long for the years when I programmed the AFI Theater because here was a dream double bill plunked in front of me. Just about the time I was congratulating my brainstorm after making the connection between the documentary and Forsyth’s more life-affiriming riff, my self-admiration was dashed upon hearing Forsyth and Kermode make the link themselves. The two thoroughly destroyed my thunder with a wink, the way the Scots do to do Big Oil here.