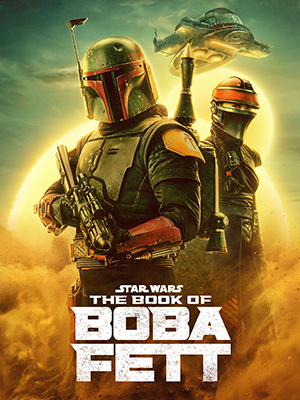 Answering some questions while raising others, “The Book of Boba Fett” is an oddly structured mini-series centered on what was once one of the more mysterious characters in “Star Wars” lore.

First appearing more than 40 years ago as little more than a bounty hunter with a cool costume, Boba Fett didn’t get much of a backstory until the 2002 prequel Attack of the Clones, which established that he himself was a clone of another bounty hunter, Jango Fett, played by Temuera Morrison. Boba had seemingly been killed off in 1983’s Return of the Jedi, eaten by the Sarlacc Pit while working for Jabba the Hutt, though it was widely assumed he survived, popping up again in countless comic books and novels. The first live-action confirmation of his survival came in 2020 when he showed up on “The Mandalorian,” played by Morrison, and ended up assisting the title character there in exchange for recovering his armor.

“Book of Boba Fett” picks up following Fett’s actions in the post-credit scene of “Mandalorian” season two, in which he takes over Jabba’s criminal empire.

In his own show, he must learn to navigate the tricky political dunes of Tatooine in order to maintain his power, a task he comes to discover he may be ill-suited for, despite the help of master assassin Fennec Shand (Ming-Na Wen).

The seven-episode season plays heavily on the tropes of Westerns, while also touching upon gangster movies, as Fett must make deals with local power brokers and learn whom he can trust.

Early episodes use a flashback structure to divide the storyline between Fett’s present, which takes place about five to six years after Return of the Jedi, and what happened to him after escaping the Sarlacc.

After finally depicting Boba’s escape from the Sarlacc, the show reveals that his armor was stolen by Jawas, and Fett himself was captured by Tusken Raiders (the tribal “sand people” of the original 1977 film). He eventually comes to learn their ways, assisting them in a skirmish with an offworld syndicate that is running illicit substances through their territory.

The show mostly plays as an excuse to pile on fan-friendly references to other aspects of “Star Wars” up to and including two episodes (five and six) that barely feature Boba at all and mostly continue the storyline of The Mandalorian (Pedro Pascal).

The end result is a show that offers a number of great “Star Wars” moments, but may otherwise leave viewers wishing for something edgier and more substantive.