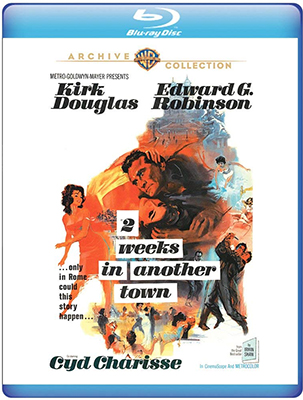 Adapted from a novel by Irwin Shaw, whose before-and-after work fared better on screens both big and small, 1962’s 2 Weeks in Another Town is somewhat more fascinating than it seemed at the time, though only in a few instances for the right reasons. An inside-the-movie-biz yarn full of big-ticket talent and overhead-eating locations, it’s a structural mess with compensations for stripes-earned movie junkies — not the smoke-blowers who claim to be (while on the way to catch the latest Dwayne Johnson). You can see why Town is a cult movie, why some French critics loved it and why I’m always tickled to take a fresh look. Though Peter Bogdanovich allegedly preferring it to La Dolce Vita is a loaf of cheese bread too far.

This is, after all, Vincente Minnelli and cinematographer Milton Krasner feasting on a few CinemaScope/Metrocolor morsels left over from the black-and-white Fellini masterpiece — a hybrid of old-school MGM and the already emerged European cinema of jet-set orgies, the kind of potboiler best appreciated by those who feel tears welling up at the word “Cinecitta.” It opens with lead Kirk Douglas studying the nuances of his sanitarium’s shuffleboard court after experiencing a crack-up somewhat similar to the one he’d have in seven years later in Elia Kazan’s The Arrangement — another over-the-top melodrama but a pretty true one if you’ve read Kazan’s autobiography (which you should, anyway).

Douglas plays a long washed-up actor between assignments, shall we say, but he gets emergency beckoning from Rome to aid a director and longtime associate (Edward G. Robinson) he simultaneously loves and hates. Formerly industry royalty who’s now hanging on in Italy and reduced to working for a no-talent who could be a Roman cousin of the crude producer Warren Stevens plays in The Barefoot Contessa, Robinson is laboring futilely on a love story (bring on the gondola) that actually would be more profitable were it not released and written off as a tax loss. He says he needs Douglas for a small acting role, but the real reason soon involves more of an artistic (if that’s the word) assist than that. So the sanitarium springs him.

Naturally, there are women, including a temperamental actress played by Rossana Schiaffino, another of those Italian starlets movie guys of my generation grew up with (see also Giovanna Ralli, Luciana Paluzzi and so on). Robinson’s spouse is even more trouble with whiplashing mood swings his own behavior has engendered, but al least that’s his (not Douglas’) problem. The casting in this role of Claire Trevor, an actress I always liked, rekindles some of the tension from John Huston’s Key Largo, when hood Eddie G.’s badgering of Trevor’s boozy chanteuse to sing Moanin’ Low to a captive half-dozen and her abject humiliation got the actress a supporting Oscar. Douglas’s angst-buster from most of this is a too-good-to-believe male fantasy played by Jewish Daliah Lavi (say, how’d she get here?), but he has serious competition from a hotheaded young actor with self-destructive tendencies (George Hamilton, and let’s not even go there — though the actor had shown definite promise in what was already seeing like a long two years ago in Minnelli’s Home from the Hill).

So, why, exactly, does Douglas need to be saved from shuffleboard and a whole lot more? Well, there’s an ex-wife played by Cyd Charisse — as always, a stunner of a chill pill here — but she doesn’t get to do much but scream during one of Minnelli’s oft-described “bizarre sequences” (this one in a car) or languish on a bed like one of the models from the opening credits of the director’s underrated Bells Are Ringing in the kind of pricey nightwear that Scott Pruitt would have probably expensed. Then again, what did Charisse have to work with? I’m as put off as much as any one by the kind of Neo-feminist film criticism that, say, criticizes The Great Escape or Two Years Before the Mast for not having enough women characters, but the ones here are underwritten enough to put off even the Rat Pack.

It’s tough to figure out if these problems were already in the screenplay by then personally troubled Charles Schnee or by mandated butchering of Leo the Lion dolce vita by the still existent and anti-sex Production Code at a time when its death rattle was still less thunderous than it deserved to be (and would soon become). What the Code didn’t do, Margaret Booth’s overly revered editing department likely did by imposing MGM’s patented “directorial vision flattener” (it’s been said that Peckinpah had a lot of problems with Booth around the same time when he was cutting Ride the High Country).

All this said, I do have a kind of soft spot (or maybe soft head) for these goings-on: the highly stylized decor and widescreen blocking (much less so, the performances) do offer a look-back at a time when movie co-productions and overseas dollars first became significant industry factors. If Douglas is only routinely commanding, Robinson is flawless (when was he not?), and there’s one remarkable scene between him and Trevor where a brutal argument of Edward Albee Virginia Woolf intensity later dissolves into a teary about-face (for a while) that does offers insight into a really twisted marriage. There should have been more of this.

Town has picked up a lot of eye rolls for bravely but perhaps foolishly including a clip from 1952’s much more successful The Bad and the Beautiful during a Rome screening-room scene — one presented here as a past Douglas-Robinson success when they’re hungry to “recall” their salad days. This has to be one of the cheekier examples of self-referential cinema on record — though the two movies do kind of bookend each other in ways that make it fun to see them in tandem. One is about old-style Hollywood, the other about the emerging new, and both share Minnelli, Douglas, Schnee, producer John Houseman and composer David Raksin.

But whereas B&B is a trash classic, it’s a trash classic that won five Oscars out of six nominations. Town isn’t a classic of any kind, other than maybe one of red ink — and this was at a time when this was the last thing waning Minnelli and MGM needed after the truly coffers-busting needless revamp of The Four Horsemen of the Apocalypse (nothing like being in touch with your era’s zeitgeist). This said, Town is a beautiful-looking movie to watch on a big-screen TV, re-establishing that Warner Archive will always go the extra mile to show off the standout virtue that a mass of gloss like this does have.