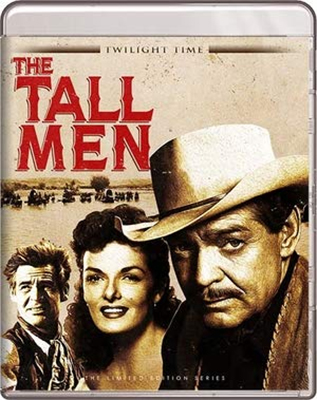 A substantial hit in its day that made Clark Gable give a damn because he took a percentage deal against his already meaty salary, The Tall Men is a combination cattle drive drama/wagon train epic with a long stop-off in San Antonio. The last is so that Jane Russell can take all the baths she wants in the town’s fanciest hotel, courtesy of amoral smoothie Robert Ryan’s deep pockets.

Whatever its flaws, the movie’s CinemaScope panoramas of a zillion or so cows sprawling and sometimes racing across the frame make this Twilight Time release something of a demonstration disc, even if the actors (while more than competent individually) never quite interact with enough kinetic energy to make us feel that anything is much at stake — other than maybe giving Gable that good payday for his second film after leaving MGM with five years left to live.

The director here is Raoul Walsh, who at the time was more than a four-decade filmmaking veteran with another decade to go before wrapping up his career with a Troy Donahue Cavalry picture (at least that was more in keeping with Walsh’s career oeuvre than the actor’s Palm Springs Weekend would have been). But in 1955, the filmmaker was already over the hill despite having just scored a monster box office smash earlier in the year with the censors-compromised movie of Leon Uris’s Battle Cry — a movie straight from the “War Is Heck” school, especially given its Marine Corps focus. The Tall Men is not dissimilarly slick in its portrayal of what had to have been an unforgivably grungy environment in its non-Texas episodes — though at least now we can view the film as something like a second cousin to 1930’s The Big Trail, which can add a little to one’s enjoyment.

Much more widely seen today than then, the intended John Wayne star-maker that fizzled was for years a victim of dim common wisdom that viewed it as simply a massive red-inked flop — before, that is, revisionist criticism rightfully pumped up its reputation. Despite its vintage, Trail had been shot in a 70mm version (thankfully still in existence and available on Blu-ray), and we can now see that its caravan footage is pretty close to breathtaking. Walsh somewhat replicates some of these scenes in Men, and they may be its strongest feature, though the extensive location work (Idaho standing in for Montana, plus more shooting near Durango) is impressive all around, where it certainly looks as if the stars are really braving the elements. And this time, Walsh had color and stereo sound (the later track sounds good on my setup).

The story, though, plays out with few surprises. With the screenplay taking a sanguine attitude toward Quantrell’s Raiders that likely wouldn’t make it to the screen today, brothers Gable and Cameron Mitchell are presumably onetime town torchers now in postwar Montana and indulging their shady streak. But if anything, one of the high rollers they rob (Ryan) is even more shifty than they are, though too polished to be an outright thug, preferring to fold his cards whenever he sees that something dastardly he’s intending no longer has the percentages on his side. Power-hungry, he someday hopes to own Montana — which appeals to the mercenary half of obvious love interest Russell, whose character roughed it through a tough childhood that left her materially hungry in addition to her loathing of the blizzards. On the other hand, there’s Gable, who has saved her life in that same Montana snow but only has limited aspirations to work his ranch, which she speculates will no doubt turn her into walking death at age 40 from having too many babies. But … he’s a tall man, and Ryan’s a little too slick.

Ryan is so cynically pragmatic that he ends up hiring the very people who’ve just robbed him because he thinks Gable has the stuff to lead his envisioned cattle trek from San Antonio back to Montana (there’s a lot of traveling in this movie). Re Mitchell … well, he’s not even that attractive. The actor is cast again as his familiar liability: how many times did he play a kid brother, a drunken kid brother, a drunken tag-along, a drunken hothead or some combination? Probably fewer than it seems, but I still always wondered what it must have been like for Mitchell trying to put the make on Hollywood starlets at parties and being asked what he did — to which he’d answer, “I play weaklings.” In any event, he’s the kind of guy who throws Russell’s dry clothes in the drink for kicks when she’s skinny-dipping, which doesn’t get you many life-longevity points, either in life or screenwriting. By the way, with all those fancy San Antonio baths bankrolled by Ryan, Jane must be the cleanest pioneer on record; she even takes her own bathtub with her on the wagon train, which is not exactly Frankie Laine Rawhide material.

There’s an abundance of Russell here, which swells the running time, though this is nothing against her personally, given her down-to-earth quality both on and off the screen that proved disarming for one so heavily promoted as a sex symbol. This said, Russell’s voluptuousness made her kind of a female equivalent to a “tall man,” and this picture came out maybe two months after I mortified my mother at a just-turned age 8 when I engaged the minister at a local summer Bible school — boy, was I miscast for that one before saying, “no way” after about two weeks —in a discussion of Russell’s breasts. (For his part, I remember that he kind of reciprocated.) Decades later, she proved her cross-generational appeal when my older son, then age 3, went into a screaming fit after I switched channels from TCM to something else after that wild Russell number in The French Line that got that got it into such censorship trouble (about all one can watch of The French Line). Whereupon my son started wailing and screaming over and over that he wanted to see “the Big Lady.”

Thus, you can see why it gets a little competitive out on the trail when so many women look as if they’ve just entered the Maria Ouspenskaya lookalike contest. And for Russell, too, because each of these men (not talking about joker-boy Mitchell) has something to offer, though it must be said that Gable looks like every one of what would have been his 53-54 years at the time. And this was a real-life era when everyone but Cary Grant looked old at 55. Ryan has riches that may or may not last a while and, to be sure, all the newest colognes, which are probably attractive in their own way. There couldn’t have been many of these sweet-smelling droplets out on the trail, even in a trail-drive epic with its own private bathtub.