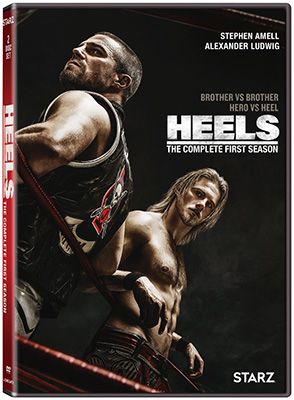 Former “Arrow” star Stephen Amell is a natural choice to headline the series, given he’s such a huge fan of professional wrestling he actually participated in storylines and matches for WWE.

Amell plays Jack Spade, who runs the Duffy Wrestling League and also serves as its champion. Jack is the DWL’s primary “heel,” which is wrestling parlance for a bad guy. His brother Ace (Alexander Ludwig) is the DWL’s primary face, aka good guy, and the top contender for the title.

While the DWL remains a popular attraction among the locals, it is struggling financially, fending off a glitzy, well-funded upstart organization from Florida. By day, Jack works as a salesman for riding lawnmowers, though he remains dedicated to keeping the DWL alive to maintain the legacy of his father (David James Elliott), who committed suicide a year earlier and whose plight is depicted in flashbacks.

Wrestling fans should enjoy some of the nods to the inner workings of professional wrestling, but the show also works simply as a family drama. Non-fans will get a good lesson in the mechanics of the wrestling business, including terms such as “kayfabe,” which refers to the presentation of the fictional storylines and characters as if they were real. This often extends to performers who are friends in real life but enemies in the ring avoiding each other in public just to keep up appearances and help sell their feud to the audience.

While the matches might be staged, the competition behind-the-scenes is very real, with the wrestlers jockeying for position among the company’s roster. Solid performers will get a push, and loyalty is rewarded.

When Ace’s ego begins to blur the lines between his character and his real self, the in-ring feud between the brothers boils over into real life, which could have a devastating impact on the future of the DWL.

The flipside of kayfabe, however, sometimes means pretending things that weren’t planned were indeed part of the intended storyline all along, so as not to give the impression the organizers don’t have a handle on what they’re doing.

With Ace as a wild card in Jack’s attempts to steer the DWL toward lasting success despite the pressure of a rival organization, the series manages to apply the framework of wrestling storylines to the Spades’ family drama. The potential for betrayal constantly looms, subverting audience expectations over how the DWL’s in-ring storyline is supposed to play out.

The eight episodes of the first season provide a solid foundation for a series that can be enjoyed by both wrestling fans and casual viewers alike.