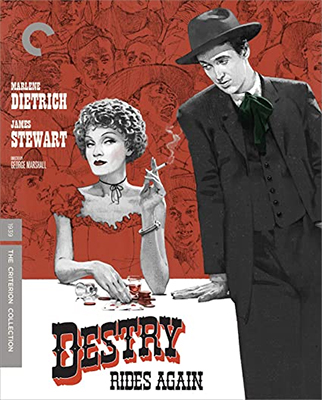 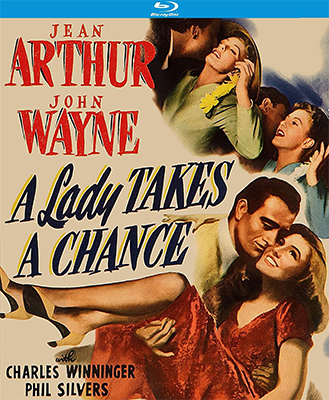 Maybe it’s not the rollicking pairing that John Wayne and somewhat sassier Ginger Rogers might have been had screen-teaming history played out in a different casting universe, but John Wayne and Jean Arthur will do just fine, thank you. She agreeably melts Wayne in 1943’s moderately obscure but easy-to-take A Lady Takes a Chance, as was, of course, her style.

Sometimes your eyes can glaze over when racing through IMDb.com credit listings or the monthly TCM schedule and synergetic “possibilities” glide by without burning into the brain. So in this case, then, you might not slow down enough to stop and think, “Wayne and Arthur?” (though it was really “Arthur and Wayne” because she was still the bigger name in the early ’40s) before the light bulb going off over the head serves up a reminder that we didn’t get this everyday. This is why I decided to take my first look in a long time at this wartime romantic comedy against a 1938 setting, though the fact that Kino’s Blu-ray is advertised as a 4K scan of the nitrate original negative and “fine grain” was certainly another factor. And the presentation here is, indeed, sharp and detailed — so much so that we can see that Arthur (about 42 here) is wearing a lot of makeup and that Wayne (about 35) is almost too old for his role. No sweat.

This is also the only movie you’ll ever see where Wayne and Grady Sutton are romantic rivals for Arthur (or anyone else, I would think) — or one where Sutton and a playing-it-straight Hans Conried are competitive for her as well, at least in their own minds. Even Phil Silvers, amid his bus company meet-and-greet role on the tour that Arthur is taking, gives her the eyeball. Not exactly a night with the Chippendales crew.

At this point, Wayne was about four years beyond Stagecoach but not yet the superstar that Red River made him. Still, he was on the heavy upswing and working all over the place: Republic, Paramount, Universal and even at MGM for Reunion in France with Joan Crawford and future Blacklistee Jules Dassin (what the hell was that about?). Lady was an independent release produced by Arthur’s husband, Frank Ross, for United Artists release — and as in a lot of indies of the day, the trappings are minimal: a bus interior, saloon, a rodeo venue (or as Wayne says here, “ro-DAY-o”); Duke digs that make Elvis’s first rented room after he gets out of the slammer in Jailhouse Rock look lavish; and an outdoor set where both stars, sidekick Charles Winninger (in jeans, no less) and a horse can sleep under the stars.

Curiously, the three top-billed actors here all had connections to John Ford (maybe the horse did, too). Wayne’s link is obvious, but Arthur’s first screen appearance had been in Ford’s 1923 Cameo Kirby. And quite a bit later, her semi-breakthrough movie (as opposed to her major one in Mr. Deeds Goes to Town when she was already in her mid-30s) was in Ford’s The Whole Town’s Talking. Even Winninger landed one of the best roles of his career for the director when Ford cast him in 1953’s The Sun Shines Bright, the remake of the director’s own Judge Priest with Will Rogers. This movie isn’t on the same level of cinematic interest, but despite all the programmers he got stuck in during a long career, Lady’s William A. Seiter was admired by some for his comic dexterity, and anyone who directed Laurel & Hardy in Sons of the Desert will never get the full diss from me.

Basically, Lady is almost all actor charm taking us from the leads’ dramatic meet-up to the point where even Laurel & Hardy would have been brainy enough to figure out where Arthur and Wayne are predestined to land. It’s interesting to watch Wayne underplaying and not once blowing his romantic stack to great degree, even when he’s forced out of the room he’s taken Arthur up to for surprisingly up-front intentions (given those Hays Office times). As mentioned, it’s not much of a room, and a realist wouldn’t give this relationship much of that chance its lady is taking. This is because the still-handsome Wayne is well past his Big Trail youthful look, and time isn’t on your side in the rodeo profession. There’s no heed taken here for that black-and-blue Junior Bonner syndrome, and Wayne looks pretty free of scars, healed bone-breakage or the psychological toll it has to have taken when you’ve been sleeping for too many years next to a campfire and Charles Winninger. And yet: Romantic fantasy or not, Wayne represents one a woman might want to indulge in when the alternative is waking up in some Niagara Falls honeymoon suite with Grady Sutton and an empty bottle of Thunderbird.

As it turned out, the seriously camera-shy Arthur had only three features and a short-lived TV series to go in her screen career — and this over a long period. Wayne, meanwhile, spent a lot of the next couple years going the full World War II route (on screen, at least) with The Fighting Seabees, Back to Bataan and They Were Expendable, which did a lot for his popularity. Thus, this good-natured little comedy (coming right off an Arthur big one: The More the Merrier) does capture a moment, just as its story tries to do. Ever mindful of 1943 world events, a statement in its opening credits makes a big deal of the story’s 1938 backdrop — a time when there’d been no gas or tire rationing and a courting couple or anyone could drive all over the Western rodeo circuit.