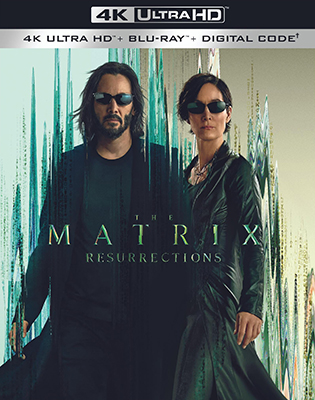 At the end of the third movie in 2003, Neo and Trinity (Keanu Reeves and Carrie-Annie Moss) seemingly sacrificed themselves to bring peace between the remnants of humanity and the machines that sought to enslave them. Resurrections opens with the idea that the original story might have been a video game created by Thomas Anderson  Reeves). Then word comes down that his gaming studios’ parent company, Warner Bros., wants a fourth “Matrix,” and will do one with or without the original creative team. This is pretty much what happened in real life when the studio starting planning for a reboot of the franchise before director Lana Wachowski and Reeves signed on. So Resurrections is a bit of a tongue-in-cheek title referencing both the return of the characters thought killed off, and the long-dormant franchise itself.

Matrix Resurrections is entertaining in parts and has some intriguing ideas, but if there are future sequels they will have a lot of heavy lifting to do to prove there’s still life left in the franchise beyond running in circles.

The Blu-ray includes several behind-the-scenes featurettes, including a nine-minute video of various cast members awkwardly recapping the story of the original trilogy. In act many of the featurettes are somewhat introspective about examining the film within the context of the franchise.

The primary behind-the-scenes featurette is the 31-minute “Resurrecting the Matrix,” which delves into revisiting the franchise after 18 years and crafting the new installment to expand the mythology (described at one point as not another box in a series of boxes, but a box that encases the previous ones).

The eight-minute “Neo & Trinity: Return to the Matrix” gives Reeves and Moss a chance to reflect on their characters’ journeys and their own personal friendship. The eight-and-a-half-minute “Allies & Adversaries: The Matrix Remixed” features supporting cast members reflecting on the expansion of the franchise, while the six-minute “Matrix for Life” features more reflections on the franchise from the cast and filmmakers. The five-minute “I Still Know Kung-Fu” explores the making of some of the action scenes.

Rounding out the bonus materials are “The Matrix Reactions,” a series of nine videos totaling nearly 49 minutes in which members of the cast and production team discuss individual scenes.

Overall, the extras, with almost two hours of combined footage, present a pretty thorough examination of the making of the film.