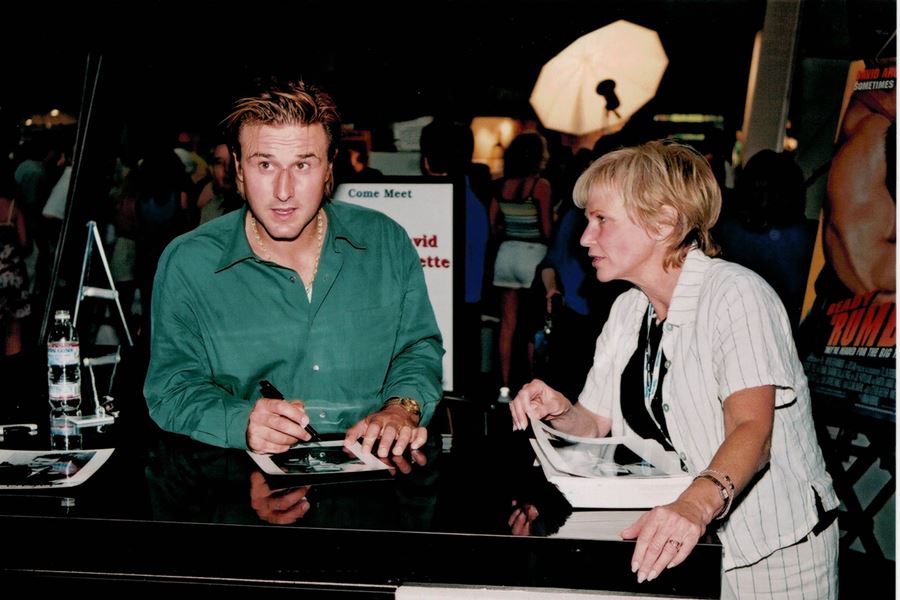 Veteran Hollywood publicist Ronnee Sass, who left her mark on home entertainment through lavish release campaigns for classic Warner Bros. movies such as Gone With the Wind and The Wizard of Oz — and an engaging, ebullient personality that made her a favorite among talent and journalists alike — died March 20 at the age of 72 after a battle with leukemia.

She is survived by her husband of 23 years, Evan Diner, a brother and two nieces.

Acclaimed director Richard Donner (The Omen, Superman, The Goonies, Lethal Weapon) said of Ms. Sass, “In all my years at Warner’s, many of the brightest days were dealing with Ronnee Sass, because she cared for the people as much as the project. And she cared for both a tremendous amount.”

Ms. Sass began her home entertainment career at what was then Warner Home Video in 1995, after working in film distribution and co-founding an independent PR and advertising agency in Baltimore — Wolff, Freed and Greenberg.

For most of her Warner Bros. career, Ms. Sass’ focus was on publicizing the studio’s rich library. Over the next 20 years Ms. Sass was instrumental in big anniversary campaigns for such storied classics as Citizen Kane, Gone With the Wind, Singin’ in the Rain, Casablanca, Blade Runner and The Wizard of Oz. She even brought the surviving Munchkins to Beverly Hills for a gala DVD release party for the latter film’s 65th anniversary in 2004 — and to New York five years later for the movie’s 70th anniversary release, a campaign that included a nationwide balloon tour. In January 2006 Sass was promoted from executive director of publicity and promotion to the newly created position of VP of publicity and promotion for theatrical catalog, under Jeff Baker.

“She was the best, most passionate, most beloved publicist in the history of home entertainment, up there with my friend Fritz Friedman from Sony,” Baker recalls. “You lived to see and experience her persona — what a woman! While many of our projects and events were worth covering, Ronnee took them to new heights and the press was never disappointed as she always delivered.”

“Ronnee was a consummate professional, working across the industry to bring the Warner Bros. library to fans everywhere,” said Jim Wuthrich, president of Warner Bros. Home Entertainment. “But more importantly, she was a ray of sunshine, always smiling, lighting up any room she entered. She will be missed.”

“Ronnee had multiple talents that included the professional characteristics of an excellent journalist, and a unique forte in relating to people of all walks of life, from the most important celebrity to the average person,” said former Warner Home Video president Warren Lieberfarb, the father of DVD. “She will be missed, but always remembered.”

Ron Sanders, a longtime Warner Bros. executive who most recently served the studio as president of worldwide theatrical distribution while remaining president of Warner Bros. Home Entertainment, said, “Ronnee was that rarest of breeds who was so effortlessly good at solving the communications crisis of the moment, while being a genuinely wonderful human being. She always had a smile or a laugh and made all of us enjoy life more.”

Ronnee Lynn Sass was born in Baltimore, Md., on May 26, 1948. She graduated from Pikesville High School in Baltimore and went on to attend the University of Maryland, College Park. In the early 1980s she worked in film distribution for studio field agencies in Baltimore.

“I first met her in 1982,” said publicist Carl Samrock, who worked for Warner Bros. from 1982 to 1997. “I remember her incredible personality, her ability to relate to people — she just had this way about her, and when I had my own agency between 1997 and 2017, she was our first client. It was just amazing the way she dealt with people like Clint Eastwood, Dick Donner and Billy Friedkin.

“I still remember an event with Warren Beatty — we took a picture of Ronnee with Warren and hung it up on our wall with the caption, Ronnee and Clyde.”

After she left her Baltimore agency and joined Warner Bros., Ms. Sass initially handled aspects of the studio’s theatrical Oscar campaigns. Each year, publicity team members throughout the department would be assigned to staff the broadcast/event, and the Warner costume department would lend out dresses for the women and suits, if needed, for the men.

As word of her death spread, tributes flowed in to her Facebook page, many from the home entertainment community.

Amy Jo Smith, president and CEO of DEG: The Digital Entertainment Group, wrote, “Ronnee’s smile could light up any room. Such a wonderful and lovely person. She will be missed by all but never forgotten.”

Smith was at Warner Bros. in 1997 when DVD was launched and the DEG was founded as the DVD Entertainment Group.

Producer-director Chris Roe, who has produced documentaries on “Creepshow” and The Night of the Living Dead and currently represents legendary actor Malcolm McDowell, wrote a lengthy tribute to Sass.

“Words cannot express the extreme sadness I feel at this time after learning that my good friend Ronnee Sass passed away today,” Roe wrote. “Ronnee was an extremely extraordinary human being. She was the best publicist I ever worked with. We became very close friends during A Clockwork Orange’s 40th anniversary activities for Warner Bros. 10 years ago.

“Ronnee was a force of nature. … In a business where so many go out of their way to brag about how good they are, Ronnee simply showed her brilliance through her thoughtfulness, creativity and work. She had a fierce work ethic. She would work around the clock to get things perfect. … She was a shining example of excellence in her profession.”

Karen Penhale, a longtime associate of Samrock, wrote that Ms. Sass “was a stellar publicist for Warner Bros. who led us through countless amazing and successful publicity campaigns for all of the studio’s great classics. We worked hard, traveled together, laughed, cried, got yelled at by some talent and applauded by others and became dear friends in the process. Having worked with many of the best film directors in Hollywood, we were looking forward to lots of lunches in the future to remember all our great adventures together. I will miss her as will so many, many others as her friends and family now do. RIP dear friend, RIP.”

Ms. Sass was an avid gardener, creating elaborate flower arrangements and centerpieces whenever she could.

In addition to Mr. Diner, Ms. Sass is survived by her brother, Steven, of Baltimore, and nieces Lauren Sass Jacobson of Baltimore and Felicia Greenfield of New York City.

A private family service will be held, followed by a celebration of Ms. Sass’s life, to be scheduled at a later, safer date. Donations in her memory may be made to the Leukemia & Lymphoma Society.