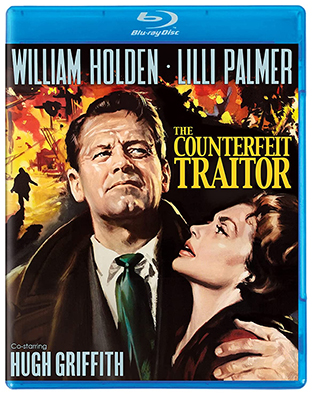 Ever wonder what espionage films looked like before James Bond appeared on the scene and forever retailored the art of transom peeping and microfilm photography to suit a dressed-to-the-teeth line of secret agents, so seductive they perspired charm? Dr. No hit American screens in May 1963, a little over a year after The Counterfeit Traitor debuted. What appeared to be a genre on its last gasp was given mouth to mouth resuscitation by a chain-smoking government operative decked out with an arsenal of gadgetry big enough to forever enthrall boys of all ages. William Holden was the epitome of beleaguered cool long before 007 was a glimmer in author Ian Fleming’s golden eye. Ironically, Holden would go on to play one of the seven James Bonds who came to win a gal at the 1967 Casino Royale. The mere mention of the title is enough to incur the wrath of franchise devotees who view it as little more than a contemptible spoof. Hopefully Kino Lorber’s Blu-ray release will alert more viewers to this rich in suspense historical thriller.

Our fact-based story, shot in authentic locales, kicks off in Stockholm 1942. While en route to a meeting with British Intelligence agent Collins (Hugh Griffith), Eric Erickson (Holden) peers over the shoulder of a man in front of him and spots his picture on the front page of the paper. The crime: Nazi collaboration, but with an excuse. An honorable guy until the world showed him otherwise, the American-born oil importer’s presence in neutral Sweden enabled Erickson to legally, if not ethically, trade with both sides. He gave up his American citizenship in 1930 to become a Swedish subject. His name was recently added to an Allied blacklist that he didn’t deserve to be on. In order to clean up his reputation, Erickson would have to risk his life as a double agent, going undercover to feed the Allies trade secrets he picked up during his frequent business trips to Germany.

Even when tackling a character as unlikable as Collins, the enormously appealing Griffth can’t suppress his mirthful side. Looking to add more ink to the murk, the British government assigns code names to their operatives. Collins understands the necessity of the move, but can’t come to terms with his southern-fried nom de guerre. “Dallas,” he chortles,”anyone less like a Texan you can’t imagine.” It’s Collins who suggested that since Erickson’s name is on the blacklist, he might just as well earn the designation by becoming vocally pro-Nazi, even at the risk of alienating his wife and best friend. With Bogart gone, there was no actor at the time better suited to play this world-weary cynic than Holden, not even Robert Mitchum. Erickson’s dead inside narration is whispered through tonsils gnarled with regret and self-loathing. It was a risky role for Holden to tackle, a character that Collins calls a “most remarkable combination of intelligence and stupidity.” It’s one thing to play along as Nazis rig a tow truck with a noose to deal with workers who refuse to comply, another to shrug off news of 100 children killed in an air raid bombing with, “Well, these things can’t be helped.”

To help gain Nazi trust, Erickson came up with the idea of building oil refineries disguised as farms in non-partisan Sweden. In what was to be her finest role, Lilli Palmer co-starred as Erickson’s love interest, Frau Marianne Möllendorf, a German aristocrat spying for the OSS. Her fate is sealed the moment she jokingly assures Erickson that when the war ends in Russian defeat, the Fuhrer will get back to being generous with Sweden. The film was directed and co-written by George Seaton and produced by William Perlberg, America’s answer to Britain’s Frank Launder and Sidney Gilliatt. The two met at Fox in the early forties and from 1945 on, Perlberg produced every picture Seaton wrote and directed.

My favorite commentary tracks are the ones in which the filmmakers and/or historians pull up a chair and talk along with the picture. Film historian Julie Kirgo’s insights do wonders when it comes to bringing viewers up to speed on historical facts, but stumbles when trying to keep pace with the visuals. Seaton displayed a singular approach to his bridging scenes. Reverse angles and straight cuts carried us through most of the dialog exchanges, but rather than connecting scenes with a jump cut or traditional fade or dissolve, Seaton takes his time during the transitions, waiting for the dialogue from the previous exchange to end even though we’ve already entered the next scene. I can’t recall seeing anything like it and was disappointed that this refreshingly unique manner of interweaving narrative with dialogue passed without mention.

Contemporary audiences — Bourne again and accustomed to hand-held climaxes every five minutes — will probably be bored silly. More realistic than many pictures of its day, The Counterfeit Traitor is the real deal, the type of finely paced storytelling that James Coburn referred to when wondering aloud, “When did films with action become action films?” It’s gripping, finely tuned movies like this that continue to spoil contemporary cinema for me. I hope it does the same for you.