The documentary Icahn: The Restless Billionaire will premiere on HBO and HBO Max Feb. 15. 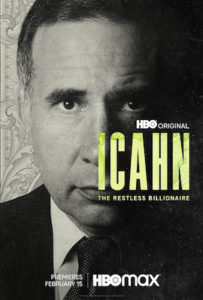 Directed by Bruce David Klein, the film explores the contradictions at the heart of famed financier Carl Icahn. Amassing close to $20 billion dollars over the last half century and at the forefront of some of the most legendary business deals of our times, Icahn, often referred to as the “Lone Wolf of Wall Street,” is a feared negotiator and master strategist in the art of corporate takeovers and investments. A polarizing figure described as both an activist investor and a ruthless corporate raider, Icahn rose from modest beginnings in Queens to become one of the richest men in the world, embodying the American Dream. Yet, he openly criticizes corporate excess and the huge wealth inequality gap. In his own words and with commentary from family members, journalists and fellow titans of industry, Icahn: The Restless Billionaire probes Icahn’s humble roots, his business acumen, and his obsessive drive to stay atop America’s corporate hierarchy.

Icahn himself takes viewers inside some of the biggest deals of the last half century, including his takeover of TWA in the 1980s, his high-profile investment in Apple in 2013, which provoked a stock rise of $17 billion dollars (this effect is known on Wall Street as “The Icahn Lift”), his very public battle with Bill Ackman over Herbalife, and his intervention during the Texaco bankruptcy, the largest in the world.

His dealings have resulted in Icahn Enterprises amassing assets of almost $30 billion dollars.

The film includes insight and anecdotes from Microsoft co-founder Bill Gates; director Oliver Stone, who used some of Icahn’s insights to inform his movie Wall Street; business journalists, including Andrew Ross Sorkin (The New York Times), Cara Lombardo (The Wall Street Journal), Rana Foroohar (The Financial Times), Scott Wapner (CNBC) and Bryan Burrough (co-author of Barbarians at the Gate); and Icahn’s wife, daughter and the son that stands to succeed him.