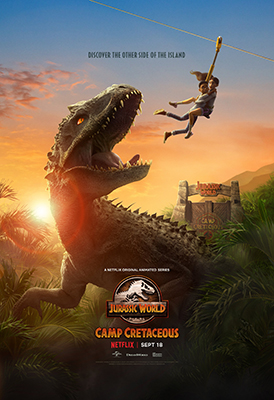 One of the hallmarks of the “Jurassic Park” movies is that the throng of characters who invariably end up on the run from rampaging dinosaurs usually includes a kid or two. “Jurassic World: Camp Cretaceous” ups the ante on that trope by stocking the entire group of potential dinosaur bait with teenagers.

This eight-episode CG-animated series serves as a sidequel taking place alongside events of 2015’s Jurassic World, in which the amusement park showing off genetically resurrected dinosaurs was open to the public on a Central American island.

Anyone who beats the game, which supposedly hasn’t happened yet, earns a free trip to Jurassic World. Dino-enthusiast Darius was previously planning a trip there with his father, who recent died before they had a chance to go. When Darius manages to unlock the hidden clue needed to beat the game, he earns an invite as one of the first six kids to try out the park’s new Camp Cretaceous program.

The others of the group are mostly spoiled rich kids who are here because their parents are connected to the park in some way. There’s also Brooklyn, the pink-haired social media star with millions of followers.

The first three episodes deal with the kids breaking the rules and endangering themselves in dinosaur enclosures in ways that should probably have gotten them kicked out of the camp, but their counselors, Roxie (Jameela Jamil) and Dave (Glen Powell) given them token punishments and a stern warning about the dangers of wandering off. There’s also a subplot about one of the kids possibly spying on the park for a corporate rival.

By the fourth episode, the show begins to align with events of Jurassic World, as the Indominus Rex breaks free and forces an evacuation of the island. After the I.Rex destroys the Camp Cretaceous compound, the kids find themselves separated from their counselors and try to get to the docks without being eaten. Along the way they stumble into several areas of the park that weren’t seen in the movie, while the counselors try to find them.

The series showcases some nice animation, although the human character designs are a bit bland. The dinosaurs and park environments are well rendered, aided no doubt by extensive the use of iconic “Jurassic Park” music by John Williams that just makes anything seem epic.

To its credit, the show doesn’t shy away from putting the kids in the same dangers they’d find themselves in any “Jurassic” movie (supposedly at the insistence of Spielberg), although they dodge so many close calls that its clear the only reason they don’t get eaten is because they’re main characters on an animated series. The intensity of some of the scenes makes the series less suitable for younger viewers.

With the episodes running under a half-hour each, the end result is an entertaining binge that basically amounts to a three-and-a-half-hour movie “Jurassic” fans should enjoy.