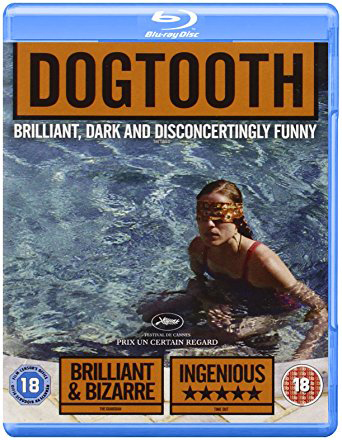 David Turpin and Louisa Ann Turpin, who face myriad charges of torture, false imprisonment, child abuse and sexual assault on their children, ages 2 to 29, stockpiled – in alphabet order on floor-to-ceiling shelving in their Perris home – hundreds of titles, including “The Golden Girls,” “The Dukes of Hazard,” E.T. The Extra Terrestrial, Erin Brockovich and Election, among others, according to RadarOnline.com.

It is not immediately clear whether the siblings – many of whom were adults – were allowed to watch much TV. Media reports allege some of the malnourished family members were chained to their beds – entertainment and self-expression limited to writing in journals.

One wonders if this sordid parenting, which reportedly began in 2010, originated following the 2009 Oscar-nominated Greek drama, Dogtooth, about a husband and wife who purposefully keep their adult children shut out from society on their walled-in property.

In what can only be described a cautionary tale of home schooling — on crack – the mentally-challenged children amuse themselves through competitions of endurance, including holding their hands under hot water.

They are led to believe they have a brother on the other side of the wall to whom they throw supplies. The parents reward good behavior with gifts and bad with violence.

The manufactured utopia begins to unravel when the father employs a woman from his factory to sexually satisfy his indifferent son.

With foreplay and sexual nuances of the female form an unknown concept to the boy, the guard soon moves to seducing the older daughter.

It doesn’t take long for the lid to erupt off this Pandora’s box of dysfunction.