This list is based on estimated number of subscribers through October 2019 and was compiled prior to the launch of Disney+ and Apple TV+, and includes paid subscriptions.

“Competition in live streaming services is intensifying as several big brand names are competing for a small but growing slice of the OTT subscription base,” Brett Sappington, senior research director and principal analyst, said in a statement. “Consumers continue to sign up for multiple OTT video services. If this trend holds, many services can continue to grow as the market grows. However, a slowdown will suggest that consumers are finally drawing the line on the amount they will spend each month.”

Until then, Disney+ continues to generate headlines, acquiring 10 million subscribers upon initial launch, which would rank it fourth on the list, ahead of HBO Now.

“Their entry, along with Apple TV+ and other direct-to-consumer services upcoming in 2020, has been a major disruptor to the OTT space and will require all players from top to bottom to ensure they are delivering unique value to their subscribers in order to retain their base,” Sappington said.

Parks contends 71% of U.S. broadband households have at least one OTT entertainment product, such as a smart TV or streaming media player.
Nearly three-quarters of domestic broadband households now subscribe to an online video service. About 49% of recent OTT subs signed up through the service’s website; 33% through the service’s app; and 11% through a cable or satellite TV provider.

New research from Parks Associates finds that subscriptions, formerly representing just over half of total online video spending in 2012, now account for nearly 86% of all internet spending on TV and movies.

The Dallas-based research follows analysis of market trends and profiles of OTT video service providers in the U.S. and Canada, including Netflix, HBO, YouTube, and Amazon as well as new services Disney+, HBO Max, and Frndly TV.

“The new services launching over the next several months are taking different approaches as they enter a crowded OTT market,” said Brett Sappington, senior research director and principal analyst. “While the U.S. market is important for Disney, the company will ultimately measure the success of its Disney+ service on a global scale.”

Sappington believes AT&T sees its formerly branded DirecTV Now (now AT&T TV) service as the evolution of its core pay-TV business rather than as an extension of its vMVPD efforts.

The Frndly TV is a niche play Sappington says is targeting a specific group of consumers with a low price and family-friendly content. 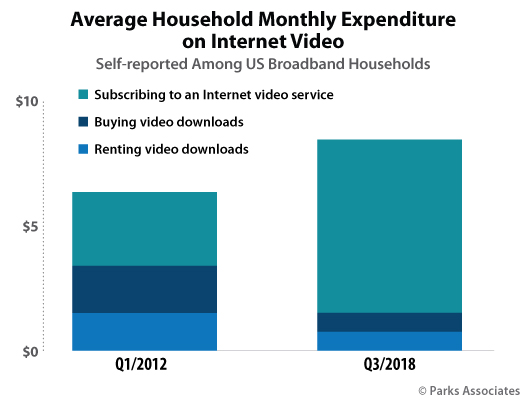 Parks says the new services, including Apple TV+, will drive consumers to increase spending on internet video and maximize the proportion of spending on subscriptions. The increasing number of new services will also test consumers’ tolerance for adding new accounts to their monthly expenditures.

“The amount of money consumers spend per month will spike, at least in the short term, as new services such as Disney+ and Apple TV+ become available. Tradeoff decisions will come later,” Sappington said. “To keep consumers spending at this higher level, services will have to consistently deliver volumes of compelling content within an engaging user experience.”