With social distancing, economic shutdown and consumer habits turned on their ear during the coronavirus pandemic, new research from eMarketer finds people are increasingly seeking out news on the virus for updates and intel on the near future.

The research group in separate online surveys conducted on March 12 and April 3, respectively, with more than 1,000 respondents, found that in less than a month’s time between surveys, there was a 12% growth in consumers seeking out coronavirus-related content online. In March, 58% of 1,042 respondents said they sought out virus-related content. That percentage jumped to 65% of 1,120 respondents in April.

Compared to the first study, there’s been a surge in news consumption — 75% of respondents are now consuming more news in general, compared to 59% in March.

Between the first and second surveys, eMarketer said it saw little change in consumer likelihood to engage with ads, indicating that consumers remain uncertain about responding to advertisements during this time. However, most respondents said that ads appearing next to coronavirus content wouldn’t change their opinion of the brands.

In March, respondents said they felt that advertising alongside coronavirus content was mostly fine — in April they now feel that it depends on the brand. Among brands respondents don’t want to see associated with virus news, include travel (53%), real estate (40%), automobiles (33%), food & beverage (32%) and banking, finance (28%).

eMarketer found that among respondents brand advertising alongside positive headlines generates the most favorable responses. When given two examples of positive, neutral, and negative news headlines, respondents were increasingly favorable toward a brand as the sentiment of the content changes from negative to neutral to positive.

“Consumers are more likely to engage with ads next to coronavirus content if seen on premium and recognizable news sources,” read the report. “Consumers have more favorable responses to advertisements that appear alongside positive coronavirus news and content.” 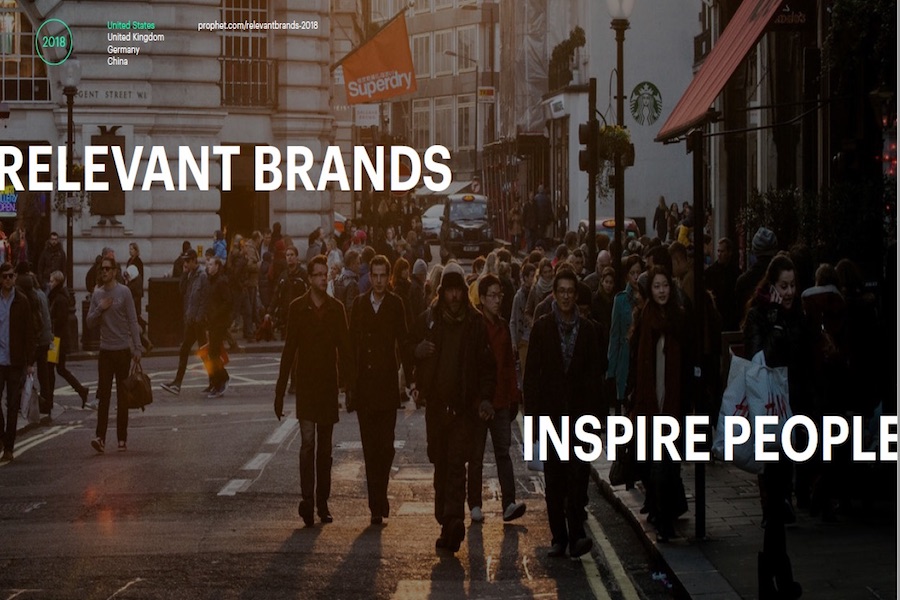 Apple, Amazon, Netflix, Google and Samsung placed among the top brands in a new survey from global consultancy firm Prophet.

The firm released its fourth annual Brand Relevance Index, in which it surveyed 12,694 consumers in the United States across 299 brands in 37 categories.

“It’s clear that to be successful, brands need more than size and ubiquity,” said Scott Davis, chief growth officer, Prophet, in a statement. “They must create a product that people love enough to integrate into their everyday lives. The brands that inspire this level of loyalty will ultimately grow the fastest because they are relevant in the moments that matter most to consumers.”

Netflix and Pixar were among top brands that were most “customer obsessed,” according to the survey, while PlayStation, Marvel and Google were most “pervasively innovative.” Netflix was the category leader in the “Media” segment, PlayStation led in “Electronics & Gaming,” Apple led in “Computing & Software,” Amazon led in “Retailers” and Verizon led in “Telecommunications.”

Facebook (No. 205) was the “biggest mover” in the negative direction.