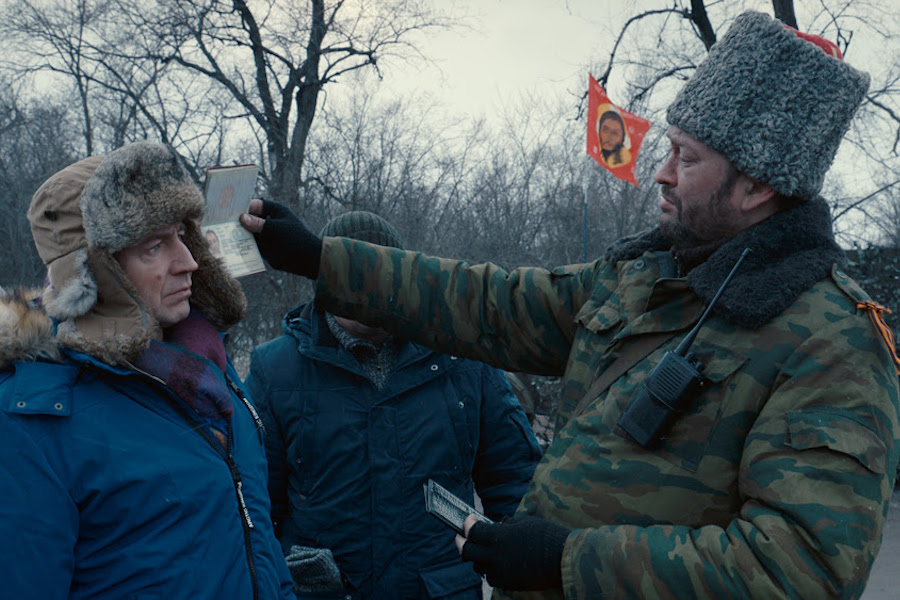 Film Movement on Nov. 29 will release the boxed set Voices of Ukraine on DVD. The set features four award-winning films about those affected by the ongoing war with Russian that first started in 2014. 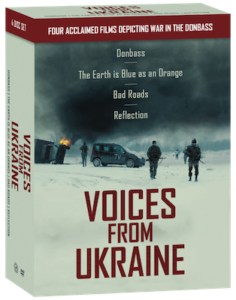 Films in the collection are Bad Roads, a drama set against the backdrop of Donbas from first-time director Natalya Vorozhbit, based on her internationally-acclaimed play of the same name, which was Ukraine’s most recent Oscar entry for Best International Film; the 2019 Oscar entry Donbass, a pitch-black absurdist dramedy from director Sergei Loznitsa, who also captured the Un Certain Regard Directing Award at Cannes; Valentyn Vasyanovych’s drama Reflection, a Venice Golden Lion nominee; and The Earth Is Blue as an Orange, a Sundance Award-winning documentary from Iryna Tsilyk.

Bad Roads (2020), presented in Ukrainian with English Subtitles, features four stories set against the backdrop of the Donbas roads. A man alleging to be a schoolmaster is accosted by the military at a checkpoint. Two teenagers wait for their soldier boyfriends in a dilapidated town square. A journalist is held captive and gets brutally assaulted. A young woman apologizes to an elderly couple for running over their chickens.  From first-time director Natalya Vorozhbit, the film swept the Ukrainian Film Academy Awards with Best Actor, Best Supporting Actor, Best Supporting Actress, Best Screenplay and Discovery of the Year, along with the Verona Film Club Award at the 2020 Venice Film Festival, among other international accolades.

Donbass (2018), presented in Ukrainian with English subtitles, explores the region of Eastern Ukraine where a hybrid war takes place, involving an open armed conflict alongside killings and robberies on a mass scale perpetrated by separatist gangs. In the Donbas, war is called peace, propaganda is uttered as truth and hatred is declared to be love. Life is suffused with fear and suspicion. What is real and what is fake news? Through 13 “chapters,” the film takes audiences on a journey within the depths of the conflict zone and through life-threatening events. Among numerous other awards, Donbass — which was Ukraine’s submission for Best Foreign Language Film at the 91st Academy Awards and captured Best Film, Best Director and Best Screenplay at the Ukrainian Film Academy Awards — also earned Sergei Loznitsa the Best Director Award in the Un Certain Regard Competition at Cannes.

In Reflection (2019), presented in Ukrainian with English subtitles, Ukrainian surgeon Serhiy joins the military to fight against the Russians in the Donbas region. After being captured by enemy soldiers, he witnesses the horrific torture and interrogation of his compatriots while being forced to monitor their vital signs. Following his release, Serhiy returns home to his family, still suffering from the trauma he experienced and hiding a devastating secret.

Director Iryna Tsilyk’s documentary The Earth Is Blue as an Orange (2020), presented in Russian and Ukrainian with English subtitles, follows single mother Anna and her four children as they document their lives under siege in the war zone of Donbas, Ukraine. Eldest daughter Mira dreams of becoming a cinematographer and as bombs descend on neighboring homes, the family construct, act in and edit stylized scenes of dangerous predicaments they’ve lived to tell. Mira’s re-creations ratchet up the drama, using local soldiers, tanks and even her own grandmother to tell terrifying tales of survival. Every member of the family has a passion for cinema, motivating them to shoot a film inspired by their own life during a time of war. For Anna and the children, transforming trauma into a work of art is the ultimate way to stay human. The film captured Tsilyk the Best Director Award in the Sundance Film Festival’s World Cinema Documentary Competition in 2020.