The average time spent with subscription OTT video content in the U.S. will surpass 62 minutes per day this year, up 23% from 2019 and 38% since 2018, according to new data from eMarketer.

The research firm contends a plethora of new streaming platforms, including Disney+, NBCUniversal’s Peacock, Quibi, Apple TV+ and HBO Max (WarnerMedia), have accelerated home entertainment options for people spending greater percentage of their time in the home due to the coronavirus pandemic.

The average time spent with Netflix domestically will surpass 30 minutes per day, up more than 16% from 2019. Amazon Prime Video, the third-most-popular streaming platform after Netflix and Hulu, is projected to see a 19.1% increase this year to nearly nine minutes per day. 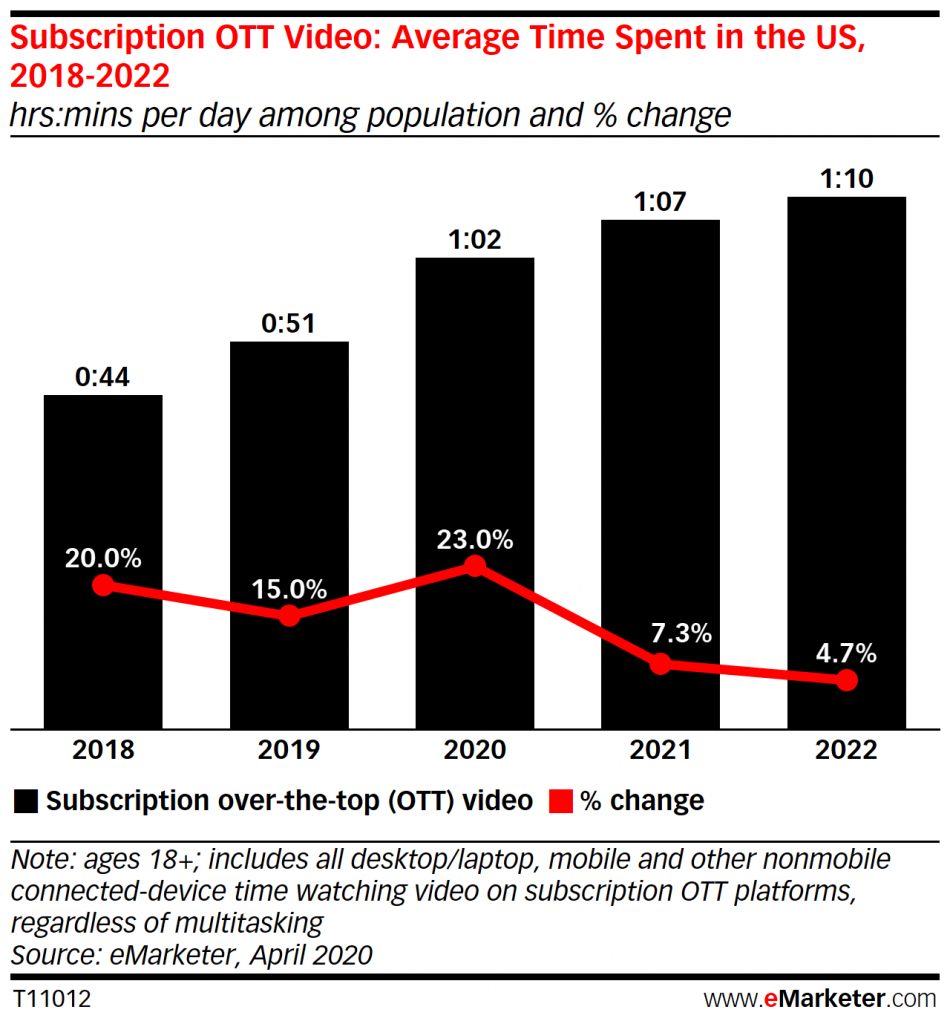 As cord-cutting speeds up, more video consumption will shift to SVOD. The cancellation of live sports, as well as growing unemployment, will cause some consumers to cancel their cable subscriptions. In fact, eMarketer says 9.2% of respondents to their survey said they had already canceled or were planning to cancel their pay-TV subscription due to the pandemic.

The survey, conducted on March 31, is indicative of the U.S. population on the criteria of gender, age, income, and living area. Most of these consumers are likely to replace traditional TV with digital video, leading to more time consuming subscription OTT content.

“Subscription streaming will remain the most popular way of consuming digital video for the foreseeable future,” wrote Blake Droesh, author of the report. “By the end of our forecast period, time spent will reach 70 minutes a day. That’s nearly 54% of daily time spent with digital video, which will average 130 minutes per day in total.”

Droesh cautions that daily time spent with digital video will eventually hit a ceiling due to market saturation.

“Any new-to-market subscription OTT services are unlikely to boost time spent,” he wrote. “Instead, they’ll have to edge out existing services for a piece of the pie.”