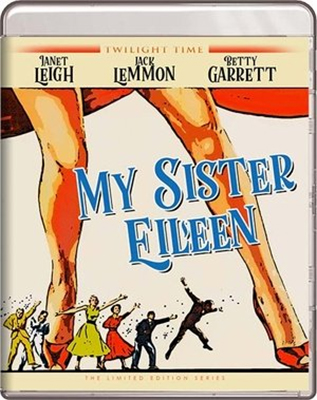 As a Columbus, Ohio, Midwesterner who lived for a period in Greenwich Village during grad school, My Sister Eileen’s Columbus-to-the-Village trajectory has obvious appeal to me — though there was no way, of course, to predict any future whereabouts when enjoying the original 1942 screen version for the first time and on its own merits, sometime in the early ’60s. That one has a final gag built on a surprise walk-on appearance that I guarantee you’ll never see in any other version of the story — a real brainstorm of a capper that sent the audience out laughing and likely contributed to Eileen I becoming Columbia’s biggest hit of that year.

But let’s clarify: The ’42 go-round would be Eileen I in terms of movies but Eileen III in the full chronology, which is a tougher one to finesse than even the Here Comes Mr. Jordan/Heaven Can Wait maze. Following its origin as a series of Ruth McKinney New Yorker short stories, Eileen’s history is such a subway sandwich that its breakdown justifiably dominates the entire opening of Julie Kirgo’s Twilight Time liner notes for this CinemaScope/Technicolor revamp. First, post-New Yorker, there was a smash 1940 play, followed by that Rosalind Russell-Janet Blair movie version two years later.

Then, in 1953, it became a Broadway musical (another smash, with a title change to Wonderful Town) with Russell again — plus the young Edie Adams and a score by some pikers named Leonard Bernstein, Betty Comden and Adolph Green. But before Town was re-adapted into a TV special in 1958 (Roz again), there was this 1955 musical version from (again) Columbia, which had an entirely new score by Jules Styne and Leo Robin. Though these latter songs are a notably weak link here, the studio came up with a balding magic potion to put at least some of them over. It was “Robert” Fosse, as the choreographic credits billed him — though as an actor here playing the amiable soda jerk who gets on both the good and bad sides of Eileen, the screen lists the more familiar “Bob.”

The central hook presents sister Ruth as an aspiring writer (last named changed from McKinney to fictional Sherwood) who makes the Ohio-to-Village journey along with slightly less worldly sis Eileen, who has smitten men falling all over her (jn other words, a role made for the 1955 Janet Leigh). Cast as Russell “Ruth” role is the onetime MGM featured player Betty Garrett — her first movie in six years by virtue of her sustained marriage to Larry Parks, a candidate for one of worst of countless HUAC casualties. Compounding a melancholy streak that never invades the film, do note that the real-life Eileen married the great Day of the Locust writer Nathaniel West and was killed with him in a 1939 car crash just before the original play opened.

Even in the role of what used to be called a “spinster” (the movie is sometimes so male-piggish in ’50s fashion that I had some discomforting moments), Garrett comes off as too senior for her role — some of which this has to do with her romantic casting opposite a very fresh-faced Jack Lemmon. This was just his fifth movie, and one so early in his career that it immediately followed the Mister Roberts triumph that eventually got him an Oscar and eventually into more substantial projects than Columbia could offer him at the time. Rounding out the romantic principals are Fosse and Tommy Rall (the latter one of the original “7 Brothers” but also one of the great trio of male dancers, with Fosse and Bobby Van, in the movie version of Kiss Me, Kate). From that moment on, Fosse was on his way as a choreographer.

Eileen begins irresistibly with widescreen footage of Washington Square closely surrounded by motorized vehicles — a delightfully New York retro look that reminds me of the Columbus Circle area shots that opens George Cukor’s It Should Happen to You (Lemmon’s big-screen debut, as coincidence would have it). In addition, we also get a filmed record of Village streets and shops to augment the studio-created apartment scenes, of which there are many. This hovel is quite a joint: below the street; curtains in name only; a kitchen that’s even thinner than its wall plaster; direct-hit subway-construction explosions at constant intervals; and street cleaner trucks that regularly re-create the “East River Experience” through their open window. Through all this, Ruth is trying to sell short stories to a ladies’ man magazine publisher (Lemmon) while Eileen pursues stardom in auditions whose “break” opportunities feel like something that Tempest Storm would have stormed out of (as does she).

Following the delightful travelogue opener, the movie turns labored amid a long set-up, but matters improve — ironically, in a movie with female principals — when the guys show up. As ever, the early Lemmon is fun to watch, though his part is small despite second billing (Columbia was giving him the big build-up). The real propellants are Fosse and fellow Eileen rival Rall, cast as a slick newspaper reporter named “Chick” Clark (a moniker I might have been willing to try in my own newspapering days). Dick York (later of Bewitched) is easy to take as an unemployed jock neighbor; his squeeze is played by Lucy Marlow, who shortly after the film’s release married Yankees third baseman Andy Carey, whose nifty fielding on a couple plays helped preserve Don Larsen’s World Series perfect game the next year. (Just getting in a Pinstriped Plug here.)

Leigh pretty well delivers on her perfect casting, but it’s Fosse who has to put the movie over to at least half-successful degree because the Styne-Robin tunes are a) really uninspired; and b) so awkwardly integrated into the action that it’s like an armored truck ammo delivery to non-lovers of musicals who hate the idea of folks just arbitrarily breaking into song. Given what he has to work with, Fosse’s choreography is splendid — including a couple numbers where you can see how hard non-dancer Leigh must have worked here (Garrett already had a musical background) and a standout one where Fosse and Rall try to upstage one another with athletic moves. Like anyone else, I admire poets and philosophers, but I also admire guys who can do back flips in street clothes.

Columbia used Technicolor in the ‘50s before moving to some awful variations of Eastman in the early ’60s, which is why movies like Eileen, The Long Gray Line and The Eddy Duchin Story still have color values today that are much richer than those in movies that came years later from the studio (thank you, George Sidney, if you were the one, to get Bye Bye Birdie shot in Technicolor). This is a very handsome print, though maybe “handsome” isn’t the word for a Janet Leigh movie from this period — and I remember that Columbia’s 35mm studio copy looked pretty dazzling itself when I showed it at the AFI Theater. Eileen makes for a nifty widescreen/color demo for big-screen TVs, where you can see the apartment suddenly and amusingly becoming wider at the end when a slew of dancing extras cast as the Brazilian navy invades the apartment for a conga number. Oh, well — just another day that Henry James didn’t envision when he wrote Washington Square.