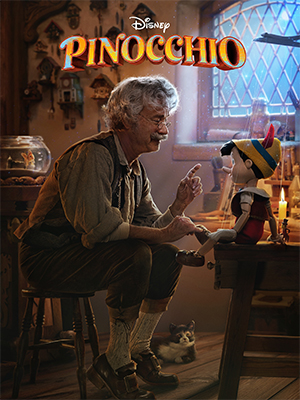 Disney’s new iteration of Pinocchio is so devoid of charm or originality that it amplifies the question of if there’s any reason the studio continues to pump out live-action remakes of its animated classics aside from just being cynical cash grabs.

That’s doubly shocking in this instance considering the director is Robert Zemeckis, the cinematic visionary behind the likes of Back to the Future, Who Framed Roger Rabbit and Forrest Gump.

The look and feel of the film is completely faithful to Disney’s 1940 animated version, which is so iconic that the signature tune of “When You Wish Upon a Star” has basically become the company’s theme song.

That song is central to this version as well, while Zemeckis and his longtime composer Alan Silvestri added some new songs that, while fine on their own, seem a bit too modern for the proceedings.

Another longtime Zemeckis collaborator, Tom Hanks, plays Geppetto the wood-carver, with make-up to give him the appearance of Disney’s animated version of the character. The live-action version adds some dark pathos to the character, making him a lonely widower who carves a puppet in the image of his dead son.

He names him Pinocchio because he carved him out of pine, and “Pinocchio” is a mash up of the Italian words for “pine” and “eye.” Characters then proceed to make several jokes about his name being such a play on words, while overlooking that in English it sounds like a combination of pine and oak, a double pun for something made of wood.

Anyway, Geppetto sees a bright star on a clear night, and makes a wish he doesn’t quite disclose, which in the original movie was for the puppet to become a real boy. In this version it’s probably for the literal resurrection of his dead son, which the Blue Fairy (Cynthia Erivo) interprets as bringing the puppet to life, and she does, though with complications. Namely, that being a puppet, Pinocchio starts out as a blank slate, so, as in the original, the Fairy names Jiminy Cricket as his conscience, with the understanding that if Pinocchio behaves and learns the values of right and wrong, he could become a real boy.

Jiminy, voiced by Joseph Gordon-Levitt, who is doing his level best to bring life to the proceedings (no pun intended), also serves as the narrator of the story, giving him a kind of fourth-wall omniscience as he explains things to the audience. Luckily for him, Disney still won’t give him the fate he has in Carlo Collodi’s original book, when Pinocchio squishes him for daring to offer advice.

Trouble begins when Geppetto decides to send Pinocchio to school, and the naïve puppet becomes so overwhelmed by the temptations of the real world he falls into all sorts of misadventures, just like in the original movie — a couple of con men sell him to the abusive puppeteer Stromboli, and he winds up at an amusement park that turns kids into donkeys for slave labor.

While the movie uses Geppetto’s collection of cuckoo clocks to jam in all sorts of references to other Disney movies, including Roger Rabbit, it leaves the most obvious opportunity for self-parody just sitting there in the form of Pleasure Island, which gets a new song but little else in the way of an update from the original film (remember, Disneyland wasn’t built until 15 years after the animated Pinocchio was released). Perhaps Tim Burton turning his Dumbo remake into a satire of Disney’s theme park empire right under their noses was a bit too much to bear.

The Stromboli sequence is perhaps the biggest deviation from the original, as Pinocchio meets a kind girl who once dreamed of being a ballerina before a leg injury left her in a brace, so she operates the ballerina puppet that Pinocchio seems to have a thing for, not realizing that she isn’t alive like he is. It’s amusing, and a bit sweet, serving to establish that Pinocchio as a wooden boy has abilities that real children wouldn’t.

Pinocchio disappearing from school kicks of the subplot of Geppetto setting off to find him (dragging his cat and goldfish along for some reason), leading to the famous scene where they all become trapped in the belly of a whale, which in this film is some sort of mutant sea monster that has swallowed enough ships his belly looks like a pirate’s cove.

Using the original film as the template for the live-action designs, rather than using the original source material to re-interpret some of the scenes, just leads to some situations that animation can get away with seem especially bizarre in a real-world setting (aside from the central conceit of a magical living puppet). For instance, why are the con-men still presented as a fox and a cat who act like people, when other animals in the film are just animals, and why can some animals talk to each other while others can’t?

The main problem is that the film makes no case for why anyone should watch it instead of the animated version — the visual style is the same, the CGI isn’t integrated very well, and any differences don’t improve upon anything from the original, including a new ending that tries an end-run around audience expectations but is just abrupt and unsatisfying.

In the more than 80 years since its release, the original film’s primary motif of an artificial being striving to find humanity has become a staple of science-fiction and fantasy, providing ample fodder for a new Pinocchio to attempt to re-interpret, but this version barely even tries.