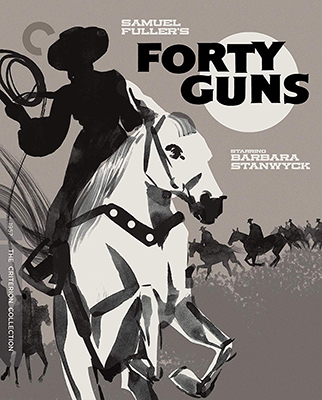 Director Samuel Fuller’s action-packed Western features Barbara Stanwyck doing her own stunts as a ruthless landowner seeking to keep her drunken brother out of trouble when lawmen ride into town in search of a gunman under her employ.

20th Century-Fox chief Darryl Zanuck understandably wouldn’t let Samuel Fuller employ Woman With a Whip as a title for his sometimes gonzo 1957 Western (pause here to absorb this). And then there’s Fuller’s later assertion that queen-of-the-lot Marilyn Monroe herself was interested in the movie’s lead role. One can envision such a mind-expanding combo adding a couple million to the grosses via resourceful counter-programming against a year that also gave us Universal-International’s Tammy and the Bachelor — but wait. Fuller ended up doing more than well enough with what came to be known as Forty Guns, with Barbara Stanwyck establishing quite the physically active on-screen presence once she signed on — and at age 50 at that. Now, a half-century later, here it is getting Criterion treatment.

Per usual when it comes to Fuller, the result can be a matter of taste even for those favorably disposed to this producer-writer-director-auteur. And this was so from the very beginning of an entire career of movies that forewent standard editing rhythms to become a succession of high points (which can be exhilarating for some and numbing for others). There was also the filmmaker’s predilection toward the risible, as in Guns’ roving troubadour who strums his guitar down dusty streets to sing about both the story-central woman and her whip. Well, it was ’57, and guitars were everywhere this side of Eisenhower’s Cabinet.

Fortunately, Fuller opens with a gorgeously shot caravan of lickety-split horses racing across a plain — photographed by Joseph Biroc in black-and-white CinemaScope (if you long for color here, you are not a movie person). In other words, we’re off — and, beyond that, are soon made to realize that all this land serving as the horses’ racetrack is owned by Stanwyck, who built her spread from nothing by a lot of ruthless chicanery that made it tough for her to find a lover who could compete. An added distraction has been her apparently futile attempts to maintain the hide of her drunken, shoot-em-up younger brother played by John Ericson — casting that almost makes you wonder if Cameron Mitchell was on vacation, though the role isn’t totally unlike Ericson’s in Bad Day at Black Rock except for his boozily malevolent streak. As for Stanwyck, her vengeful Western toughness here harkens back to her star turn in Anthony Mann’s even better The Furies (1950), which Criterion released as well in a deluxe DVD set but has not upgraded to Blu-ray.

Into all this rides Barry Sullivan and two brothers, including one played by Gene Barry, who only rates fifth billing here despite having just had the lead in Fuller’s China Gate. They more or less become the surrounding town’s reluctant “Law” — especially given that a going-blind marshal (The Searchers’ Hank Worden) is dispatched for good early on and the compromised sheriff (Dean Jagger) isn’t much help, either. Jagger does try taking Ericson to the woodshed on occasion, but he’s hamstrung due to his yen for Stanwyck, who has apparently given him a tumble somewhere going the way. It’s a relationship that almost anyone can see just wasn’t going to take. What’s more, Jagger knows where too many of Stanwyck’s bodies are buried; think Michael Cohen with less hair.

A long tornado sequence in the middle of the picture is Fuller at his best, and even with effects wizard Linwood Dunn’s usual magic, we can see that real-life horsewoman Stanwyck is doing her own stunts, which do not look un-strenuous by a long shot (or in close-up, for that matter). Given Fuller, the action never lets up, and the casualty rate threatens to reach Hamlet extremes — or, to keep it more in the gonzo feminist Western vernacular, maybe Johnny Guitar’s. The climax here is pretty wild-ass even in this final-release version, which Zanuck forced Fuller to water down because the sales department wouldn’t have been able to market the picture were it as brutal as intended (I can just see the stampede of ’49 Plymouths huffing their way out of drive-ins).

The movie runs only 80 minutes (about right), but that’s less than half of what Criterion has to offer. Also included is the slightly longer 2013 documentary (A Fuller Life) that daughter Samantha Fuller put together, in which former friends and associates (Constance Towers to Wim Wenders to Mark Hamill) read from the filmmaker’s memoirs. It’s a surprisingly effective way to go, but, then again, maybe not all that much so — given that the words are punctuated by dramatic home movies that the senior Fuller shot over his life, in particular the ones from his extraordinary wartime service. Few or no one had seen these because they were tucked away in the shed of archives that survived him, which is either disorganized or substantially organized disarray, depending on when we see it. This is also the setting of an additional bonus interview with Samantha and widow Christa Lang Fuller, who are good at re-enforcing each other’s memories.

Essays are bountiful, including a print essay by film historian Lisa Dombrowski, author of The Films of Samuel Fuller: If You Die, I’ll Kill You.” Also included — and I’ve noticed the Criterion discs that Susan Arosteguy produces really storm the barricades in terms of production values — is a roughly half-hour sit-down with one of my faves (Imogen Sara Smith), who makes it all look natural and easy in an organized and well-crafted riff on Fuller and Western genre conventions in general. And synched up to the feature on an alternate soundtrack is a 1969 appearance at London’s National Film Theatre by Fuller himself, who seems to love giving 15-minute answers to questions. You just know that he had to have been an interviewer’s dream.