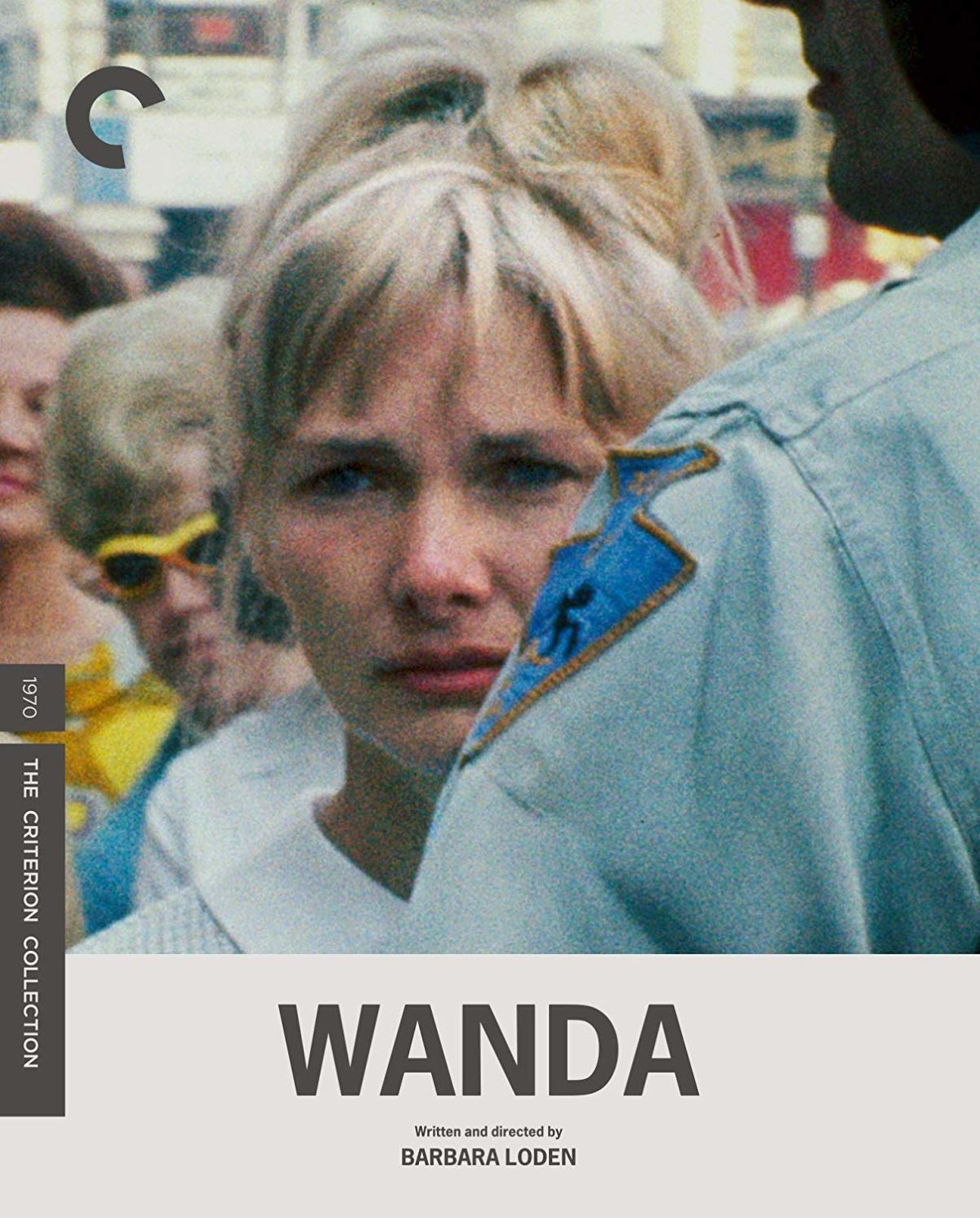 Barbara Loden went from small-town, Southern-bred model to winning a Tony for Arthur Miller’s After the Fall, a controversial play full of Marilyn Monroe under-and-overtones that was directed by Loden’s real-life husband, Elia Kazan. Before that, she was also memorable in two Kazan films: as Montgomery Clift’s down-to-earth secretary in Wild River (a tiny role on which she put unique spin) and as the Warren Beatty sister and self-destructive pistol in Splendor in the Grass. Also impressive in its own loonier way was her earlier stint as an Ernie Kovacs TV sidekick, where it’s been said she donned heavy ape makeup to become a sometimes member of the three-simian Nairobi Trio, a contender for Kovacs’ standout concoction along with martini-swilling poet Percy Dovetonsils.

Then, roundabouts 1971, Loden wrote, directed and starred in Wanda (she also raised the money) — something that just wasn’t being done at the time in any mainstream movie milieu and certainly not by a woman. Extremely personable in ways that come across forcefully in bonus features from Criterion’s new Wanda release, Loden is sometimes regarded as one who died (at 48) without fully realizing her artistic gifts, but anyone with this resumé is one I’d automatically have wanted to meet. And what stands out about the finished film — aside from the fact that scouting its locations could well have been the most depressing gig in the business — is the degree to which its narrative is still such a downbeat grabber despite all of Wanda’s $115,000 raggedness. And its origin as a 16mm endeavor blown up to 35mm for the inevitably limited theatrical distribution it got. Well, yesterday’s underachiever sometimes becomes today’s side-door feminist salvo.

The unnamed setting, at least before Wanda becomes an on-the-lam road picture, is the lower-than-low-rent outskirts of Scranton, Pa., a decade before the term “Rust Belt” got coined. The title character (Loden) is introduced sleeping on her sister’s couch with a screaming and possibly unchanged baby niece or nephew nearby; Wanda’s mere presence in the household then precipitates an argument between her sister and brother-in-law as he storms off to work. It’s a discombobulating beginning to a day when she’s scheduled to appear in divorce court, an early appointment to which she is late before showing up in curlers. For her part, the journey just to get there would be arduous for anyone: a protracted trek across coal fields — the long shot of her doing so might be the most effective visual of its type since Gregory Peck and Charlton Heston duked it out from afar in William Wyler’s The Big Country — followed by a bus ride. This is not a story that takes place in Steve Mnuchin-ville.

As both the judge and an estranged husband await her, the latter — who may or may not be a lout; he seems reasonable — is advancing a credible case that Wanda is an unfit mother who flubs nearly all of their children’s needs. When she’s finally able to show up, Wanda agrees in a blink that the kids should go with their father and his new companion. This is a key to her character: She’s passive to a fault, which is probably not inconsistent with her blatant tendency to bed-hop. The fact that she still has her looks — and with no help from her wardrobe or makeup — means that she frequently gets unnuanced opportunities from the litany of male slugs who come her way. Then, purely by chance, she meets someone who gives her life some much-desired regimentation by telling her exactly what to do with the threat of punishment — even down to which condiments to order on his carryout hamburger.

Unfortunately, the value of such tutelage is limited, given that this colossally dyspeptic sort (Michael Higgins) is a petty thief who, unknowingly to Wanda, is robbing the otherwise empty bar where the two meet late at night as the bartender lies unconscious-or-close out of sight under the cash register. Faced with an existential decision — not that “existential” is a word thrown around too often in this film — she elects to join him for a life in shabby hotel rooms and convenience store “eats.” We immediately have a sense that this isn’t going to end well — and, in fact, it didn’t for the real-life woman whose news story inspired Loden to make this film in the first place. Yet in an odd way, as things turned out, the result actually may have, a pitiful resolution (Loden often related it in interviews) that’ll intrigue anyone with a sense of irony.

For all of Loden’s accomplishments in getting a largely successful movie on the screen, Higgins deserves a lot of credit here because his characterization is so eminently watchable. With glasses and close-cropped hair that make him look like certain pictures of John Dillinger — it’s a visage much closer to the Warren Oates/John Milius screen Dillinger than Lawrence Tierney in the ’40s sleeper at Monogram — he’s the complete tinderbox of exploding emotions without many redeeming qualities. And yet, he does display genuine affection for a couple senior men here, one of them his father. It would be fascinating to get a bead on this guy’s backstory — though, as with everyone in this movie, he probably started without a single card in the deck that would have even allowed him to break out into, say, Pittsburgh.

The big women critics of the day — Pauline Kael, Judith Crist, Kathleen Carroll — all dumped on Wanda in large part because of the title character, who wasn’t much of a role model then for young women and is even less of one now. But in terms of portraying basic survival instincts (the day-to-day kind, that is, without any long-term goals), it immerses one in its story pretty well from the get-go. Loden also thoroughly immerses herself in the role, a performance that never gives away that she was a whole lot sharper than the character she was playing. The contrast is so striking that it almost rates a chuckle when we see Loden comparably dolled up but still looking natural on a Dick Cavett promotional appearance in early ’71, included as a bonus extra. (The other guests are Jimmy Breslin and Howard Cosell, just before the first Ali-Frazier fight, further proof that the ’70s Cavett shows had no talk-show peers when it came to smorgasbord guests — ever).

Amy Taubin — who’s a critic I’d want to read on this movie — penned the Criterion essay, and there’s an hour-long audio interview that was done at the AFI where Loden talks a lot about simply getting this labor of love on the screen (after several attempts with others, she basically stumbled into finding a financial angel when she wasn’t even trying). We also get the actress/director in a half-hour educational film about a pioneer woman, yet the transcendent standout here is an hour-long documentary on Loden by Katja Raganelli that was filmed just three months before the former’s death in 1980 at age 48 from cancer. Loden looks amazingly in shape here — and, in fact, was on an intensive dance regimen — but she has that look through the eyes that often hints that someone is really sick.

Briefly appearing in the doc is cinematographer Nicholas T. Proferes, who always seems to have the camera in the right place throughout Wanda without making deal of it; he subsequently shot Kazan’s The Visitors not much later when that two-time Oscar winner decided to go minimalist himself. Loden often compared Wanda’s passivity to her onetime self, and Kazan had to have been a demanding companion, judging from his autobiography (which is in a total class by itself when taken with all the other show biz memoirs I’ve read over nearly 65 years). Take it from there, but there’s also a long passage in the Raganelli documentary where Kazan goes on and on and on praising Loden’s virtues both as a talent and as a human being. It’s really moving and certainly appears to come from the heart.