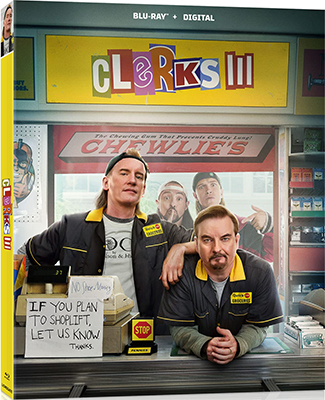 Kevin Smith’s films are known for being autobiographical and self-referential, but Clerks III takes it to another level.

The latest peek into the happenings at the Quick Stop convenience store finds Dante (Brian O’Halloran) and Randal (Jeff Anderson) still running the shop where we were first introduced to them way back in 1994’s Clerks, and which they bought at the end of 2006’s Clerks II.

When film buff Randal suffers a near-fatal heart attack, he decides to make a movie chronicling his experiences working in retail and dealing with an endless stream of insufferable customers — which is pretty much everything we witnessed from the first two “Clerks” movies.

The dialogue between Randal and his heart surgeon will be instantly recognizable to anyone who has watched Smith discuss his own heart attack he had in 2018. In fact, thanks to Smith’s predilection for talking about himself every chance he gets, longtime fans will perceive the source inspiration for nearly all the characters, scenes and storylines from the films he’s written, and Clerks III is no different.

It’s well established how Smith self-financed the original Clerks, filming it in the very convenience store where he worked. Not only are the characters of Dante and particularly Randal based on aspects of his personality, but he’s also literally manifested in the film as Silent Bob — one half of the pot-dealing duo of Jay and Silent Bob (alongside his real-life best bud Jason Mewes) who would subsequently form the basis of the View Askewniverse shared fictional reality (named for Smith’s View Askew Productions company) in films such as Mallrats, Chasing Amy and Dogma before cinematic universes were cool.

By having the characters he based on himself decide to make the movie he made that started his career, while simultaneously inserting his own heart attack into the story to ruminate on the fleeting nature of life, Smith has not only turned the meta dial up to 11, he’s trying to inch it to 12 and beyond, like a cinematic ouroboros eating its own tail.

Clerks III is a textbook example of a director using his art to reflect on his own career, which becomes even more evident when Silent Bob character becomes the cinematographer for the film-within-a-film and gives a speech about why it’s being shot in black-and-white (as the original Clerks was).

Smith’s movies are admittedly an acquired taste, so Clerks III in general is probably best described as lightweight fluff with a heavy heart (pun intended). For those enmeshed in his storytelling thrall, the film is surprisingly emotional and sentimentally resonate, though it relies on some troubling story points that many fans are likely to find jarring, particularly in how they reframe Clerks II in a new context.

But Clerks III brings the saga of Dante and Randal full circle, culminating in a third-act twist that embodies a plot point Smith has been aiming to pull off since the original Clerks (which also is treated as an in-joke).

With its true-to-life trappings, Clerks III is Smith’s most authentic film since the original Clerks, but how could it not be? He’s essentially remaking the original film with the full hindsight and built-out world of the cinematic universe that it spawned.

Smith originally intended to move on from the adventures of Jay and Silent Bob and the various ancillary characters of their shared existence following 2001’s Jay and Silent Bob Strike Back, but returned to their world to check in on Dante and Randal 10 years post-Clerks in Clerks II, which then seemed like the denouement of the View Askewniverse. He proceeded to make a number of offbeat comedies until his heart attack prompted him to return to the realm of his most famous characters with 2019’s Jay & Silent Bob Reboot, which gave a fleeting glimpse of what was up with the Quick Stop in the decade-and-a-half since Clerks II.

He had been trying to make a third “Clerks” for several years but scrapped the project due to Anderson declining to participate. That iteration of the threequel would have found Randal building a community around an ad hoc convenience store he creates while waiting in line for a movie a year before it opens. Smith’s heart attack prompted him to craft a more personal story for the third film, which enticed Anderson to come back on board.

All of these behind-the-scenes details are expanded upon in the outstanding Clerks III physical-media presentation, which includes a couple of great feature-length documentaries packed onto the single Blu-ray Disc, meaning you essentially get three movies in one package.

First, there’s The Clerks III Documentary, an hour-and-a-half production diary of the making of the film with raw on-set footage and interviews with the cast and filmmakers.

Even better is We’re Not Even Supposed to Be Here Today: 3 Decades of Clerks, a one-hour-15-minute retrospective about the entire history of the “Clerks” franchise and its legacy. In it, Smith discusses his savvy move to retain ownership of the Jay and Silent Bob characters when he was selling the original Clerks, thus providing the foundation for the cinematic universe that would bolster his career and make him a cult icon.

This is an especially salient point given that a number of studios have been involved in making the View Askewniverse movies over the years, which only complicates the ownership of the various characters (and likely makes any future “Clerks” trilogy set problematic at best).

Smith himself alludes to this in a two-minute video introduction to the Blu-ray in which he extolls the virtues of physical media, citing Dogma as an example since it isn’t available through digital retailers thanks to those aforementioned rights issues (the Blu-ray can fetch big bucks on eBay).

Clerks III on disc also includes a fun audio commentary with Smith, O’Halloran, Anderson, and co-stars Trevor Fehrman and Austin Zajur, in which they all discuss what led them down the path to making the sequel.

Rounding out the extras are a half-hour of deleted, alternate and extended scenes, featuring more references and fourth-wall breaking, plus a bit of foreshadowing.

As a special treat, the digital copy included with the Blu-ray redeems for a full 4K Ultra HD version on Vudu, not just regular high-def as most Blu-ray copy codes would. A 4K disc of the film is available only through a Steelbook edition at Best Buy.