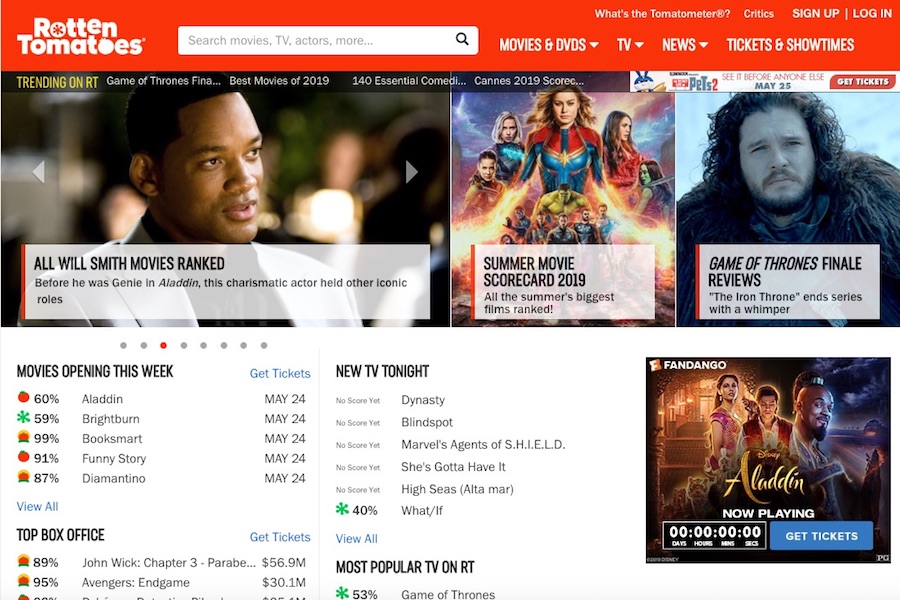 For eligible movies moving forward, Audience Scores will be made up of ratings from fans who are confirmed to have purchased tickets to those movies. Those fans’ written reviews will also display a “verified” badge.

“We know from our research that fans consult Rotten Tomatoes’ Audience Score along with the Tomatometer, when making decisions on what to watch,” Paul Yanover, Fandango president, said in a statement. “Having an Audience Score and reviews from fans who are confirmed ticket purchasers, will add even more usefulness to our product and increase consumer confidence.”

Rotten Tomatoes users can opt-in to get their rating and review “verified” if they purchased their movie ticket on Fandango. Exhibitors AMC Theatres, Regal and Cinemark Theatres plan to participate as ticket purchase authenticators later this year. Every visitor to the Rotten Tomatoes site will still be invited to rate and review movies regardless of whether or not they are confirmed ticket purchasers. Reviews (both verified and unverified) will still be listed, with those that are verified marked with a “verified” badge, so that readers will know that the reviewer purchased a ticket to that movie.

On Fandango’s site and mobile apps, Rotten Tomatoes will begin powering Fandango’s fan rating system, replacing its previous five-star fan rating, according to the service. Once their ticket purchases are confirmed through their Fandango user account, Fandango ticket buyers’ ratings and reviews will now count towards the Verified Audience Score displayed on Fandango and Rotten Tomatoes, as well as on other platforms that syndicate Rotten Tomatoes scores.

The service has previously come under fire as users have been able to manipulate the Audience Score for a particular movie through coordinated online campaigns by those who hadn’t even seen the film. In particular, a recent campaign against Captain Marvel, which has a strong female character, drew criticism of the service.

The launch of Verified Ratings and Reviews is part of the Rotten Tomatoes’ overall plan to modernize its Audience Rating System over the next year, “making it even more helpful to fans as they make their entertainment viewing decisions,” according to a press release.

Rotten Tomatoes introduced an earlier product enhancement in February, and reports each change in a Product Update Blog.

In addition to enhancing its Audience Rating System, Rotten Tomatoes has been working over the past 18 months to increase the diversity of the critical voices that make up its Tomatometer, which aggregates the collective opinions of thousands of Tomatometer-approved critics for movies and TV shows, according to the release. Last August, Rotten Tomatoes made an enhancement to its critics community, by debuting revamped Tomatometer critics criteria. With an increased focus on the critic’s individual qualifications versus the publications that they write for, Rotten Tomatoes’ goal is to enable a wider and more diverse pool of critics’ perspectives to be included in the Tomatometer. Since launch, Rotten Tomatoes has added more than 500 new Tomatometer-approved critics and publications, with plans to add even more critics in the future, according to the release.

Additionally, Rotten Tomatoes announced the establishment of a $100,000 grant program to create more opportunities for critics serving underrepresented groups to cover major film festivals and gain access to press screenings. To date, Rotten Tomatoes has donated $25,000 respectively to the press inclusion initiatives at the 2018 Toronto International Film Festival, 2019 Sundance Film Festival and 2019 SXSW Film Festival and Conference, according to the release.