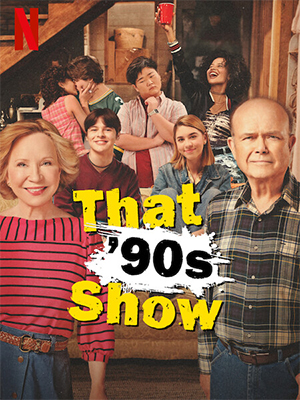 As a sequel to “That ’70s Show,” which built a solid following during its 1998-2006 run, “That ’90s Show” checks in on the happenings of Point Place, Wisconsin, in 1995, as Leia Forman (Callie Haverda), daughter of Eric and Donna (Topher Grace and Laura Prepon) from the original show, visits her grandparents, Red and Kitty (Kurtwood Smith and Debra Jo Rupp).

Leia stumbles upon Gwen (Ashley Aufderheide) and her group of friends next door. Feeling a sense of belonging she doesn’t get back home in Chicago, Leia asks to stay for the summer.

Thus, the show is 10 episodes of the misadventures of a new group of teenagers plugged into the formula of the old show, with some all-too-brief cameos from the original kids sprinkled in.

Red and Kitty, as before, hold court in their basement, with Kitty too eager to please, and Red annoyed at the return of chaos into his life. Smith and Rupp pick up their characters as if they never left them, ably anchoring the series with a firm connection to the original show.

As for other legacy characters, while it’s fun to see them pop up here and there, fans of the original show might be left a bit disappointed with how little they actually appear (Wilmer Valderrama’s Fez gets the most to do as a local salon owner). The focus is really on the new crop of teenagers, and whatever audience this show gains is going to depend on the audiences’ connection with them.

The main strength of the premise in this regard is that fans of the older show who might otherwise not relate to teenagers anymore likely grew up in the era being portrayed, allowing a sense of nostalgia to kick in.