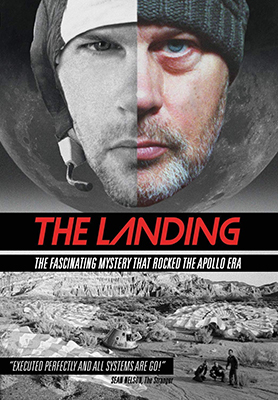 Part of the fun about the history of NASA is to look over the scope of canceled projects to imagine what might have been. That includes parts of programs that still happened, but were scaled back due to budget cuts, such as additional Apollo missions to the moon.

In reality, the lunar landings ended with Apollo 17 in December 1972. The Landing tells the story of a subsequent Apollo 18 flight that turned disastrous for the crew.

This should not be confused with the 2011 movie Apollo 18, a horror movie in which the astronauts who landed on the moon were killed by living rocks. And in real life, Apollo 18 was technically the designation of the U.S. side of the Apollo-Soyuz Test Project in 1975.

The Landing, however, is a faux documentary supposedly filmed in the 1990s about an Apollo 18 mission that experienced a mishap as it was returning to Earth, causing the capsule to land in the middle of a desert in China. While the three members of the crew were awaiting rescue, two of them became mysteriously ill and died. The third, Bo Cunningham (Don Hannah), survived and has been hounded about what went wrong ever sense.

The film starts as the examination of a tragedy before revealing new layers of information to built a circumstantial case suggesting that maybe the mysteries behind the incident aren’t so hard to figure out after all.

The Landing is a fun piece of alternate history that is put together skillfully enough that it might actually convince someone not too familiar with the space program that it actually happened. However, there are a couple of points that break the verisimilitude and give away the game. The first is that the astronaut’s names are extremely derivative of actual astronauts, with a just a few letters switched here and there — a detail that many NASA fans might find clever.

More overt is the presence of Robert Pine (father of Chris Pine, who played Capt. Kirk in the rebooted “Star Trek” movies), a veteran and highly recognizable character actor who plays a party-loving congressman who heads up the committee investigating the incident as an excuse to soak in the media attention (and provides one of the film’s best laughs when he discusses how long he served).

Still, even as a work of fiction the film serves as a nice examination of the way facts can be warped and packaged to create a narrative to obscure a viewers’ perception and make it more difficult to discern where the truth lies.