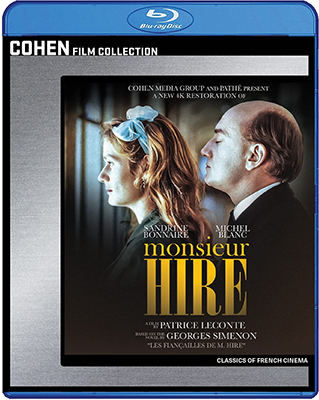 French romantic Patrice Leconte had nine films to his credit by the time Monsieur Hire first introduced him to American audiences in 1989. For the next 15 years, Leconte filled arthouse screens with a string of highly effective amatory triumphs (The Hairdresser’s Husband, Ridicule, Widow of St. Pierre, etc.) that might have given The Notebook a run for the box office gold had fans of the latter been tolerant of talking printed across the bottom of the screen. Intimate Strangers was the last of Leconte’s films I recall seeing in a threater. A quick perusal of his filmography assures us he hasn’t been dormant for the past 20 years, although you couldn’t prove it in America.

Chances are, at some point in their various tenancies, apartment-dwellers have encountered a M. Hire (shortened from Hirovich after the war). He’s the odd, bulbous-headed homunculus at the end of the hall. Allergic to eye contact, he keeps to himself. Children see in him a prime source of ridicule, banging on his front door day and night or bombarding him with flour parachutes in the stairwell. Well-scrubbed, wrinkle free, and, in the case of Hire (played with glacial aplomb by Michel Blanc), the first on the block that neighbors suspect of murder when the cops throw a sheet over the body of a 22-year-old woman found in the nearby woods. From the moment he’s first introduced, Hire is presented as cold and aloof, but that doesn’t make him a bad person. Fans flock to the bowling alley to cheer on his feats of tenpin wizardry. The lanes are one of the few places he isn’t hated, a fact he makes sure the Inspector (André Wilms) is aware of. In return, Hire is reminded of his six-month sentence for indecent assault.

Hire chalks up his neighbors’ visceral hatred to a lack of social skills and his overall unfriendly demeanor. Conversations abort the moment he steps into view only to resume the second he’s out of earshot. Neighbors assure police that the victim was just as strange and unsociable as Hire. As if that alone were enough to cement his guilt. Given his disdain for humanity, Hire couldn’t care less about how others view him, except for the beautiful woman across the way. Tailor by day, scopophilic by night, were it not for a sudden flash of lightning Alice (Sandrine Bonnaire) might never have noticed his presence. Alice enjoys the attention. The next day she hides on the landing above his door, poised to make an introduction by purposely dropping a bag of tomatoes. Later that night, Alice is aware of his presence, looking on as she makes love to her boyfriend. The sensuality lands like a haymaker in, of all places, the middle of a boxing match. Terrified of intimacy, Hire felt more at ease expressing his forbidden love for Alice in a crowd, where something as gentle as the touch of a hand can send shock waves reverberating through one’s soul.

Based on crime novelist Geroges Simenon’s Les Fiançailles de M. Hire, as directed by Leconte, one would be loath to classify this a mystery. Once the killer is revealed, most mysteries don’t withstand a return visit. In this case, the whodunit is subtly tipped early on. Leconte is such a crackerjack smuggler, it took two viewings to catch on. Nor would I call it a sexual thriller. The romance is conducted fully clothed. It’s the attention paid to detailed sensual abandon that drives viewers wild.

The Blu-ray’s one bonus feature is a doozy: parallel interviews with the director and his leading lady on the making of the film. The discussion begins with the film’s gestation from page to screen and again to screen. (Simenon’s novel was first adapted by Julien Duvivier in 1944 under the title Panique.) Ms. Bonnaire talks about character manipulation, M. Laconte discusses where a character’s emotions can lead them and together they offer their memories of making the film. Perhaps it was a matter of logistics, but the two never interact in the same frame.