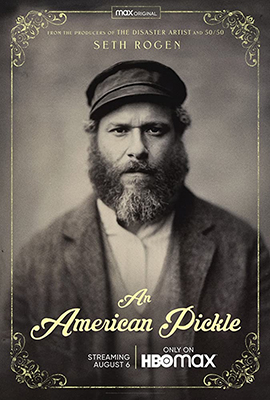 Seth Rogen gives a spirited performance in the dual role of a European immigrant and his great-grandson who find themselves co-existing through a bizarre matter of happenstance.

As Herschel Greenbaum, Rogen plays a man looking for a better life with his wife (Sarah Snook) in 1919 by moving to America to raise a prosperous family. However, the only job he can get is smashing rats at a pickle factory in Brooklyn. Due to an accident, he becomes trapped in a vat of pickle brine, just as the factory is permanently shut down due to health code violations.

A century later, some kids stumble across the condemned remains of the building and inadvertently free Herschel, who has been perfectly preserved in the brine thanks to a scientific explanation that only the characters in the film are privy to.

In 2019, Herschel learns his only living descendant is a great-grandson, Ben, who is the same age as he is (all things considered). The idea of seeing how two members of the same family from different eras would get along is something of an inverse of the situation from Back to the Future, when it was the son going back in time to meet his father, rather than the ancestor being thrust into the future.

However, Herschel’s excitement about learning of the wonders of the modern age soon turns to disappointment, as he accuses Ben of disrespecting the family’s legacy.

Ben, a software engineer, has big plans for a new app he’s designing that can rate the ethical worthiness of a product. But Herschel would rather turn his efforts toward cleaning up the local cemetery where his wife is buried, and removing a billboard for vodka that hangs over their graves. When their disagreement reaches an impasse, Herschel sets off to build a new pickle empire in America.

The movie offers some good jokes about the contrast between the hardships of life 100 years ago compared with the amenities of today that even the impoverished take for granted. And Herschel’s adventures in building up a 21st century company provide a nice microcosm of the business landscape of America and the entrepreneurial spirit. His insistence on viewing the modern world though his 19th century context is amusing in a “the more things change, the more they stay the same” kind of way.

On the whole, though, An American Pickle is a rather low-key affair, limited in scope and uncomplicated in its execution. This is first and foremost a showcase for Rogen, and the degree to which the film works at all owes to his ability to seamlessly play against himself.