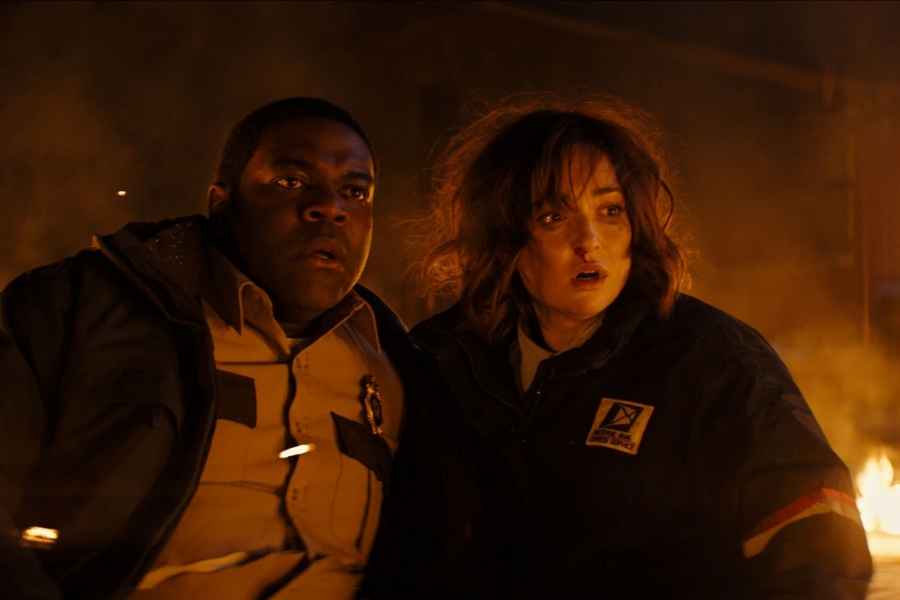 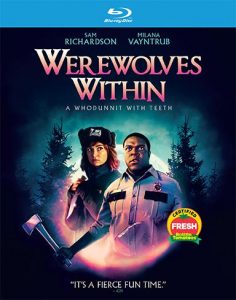 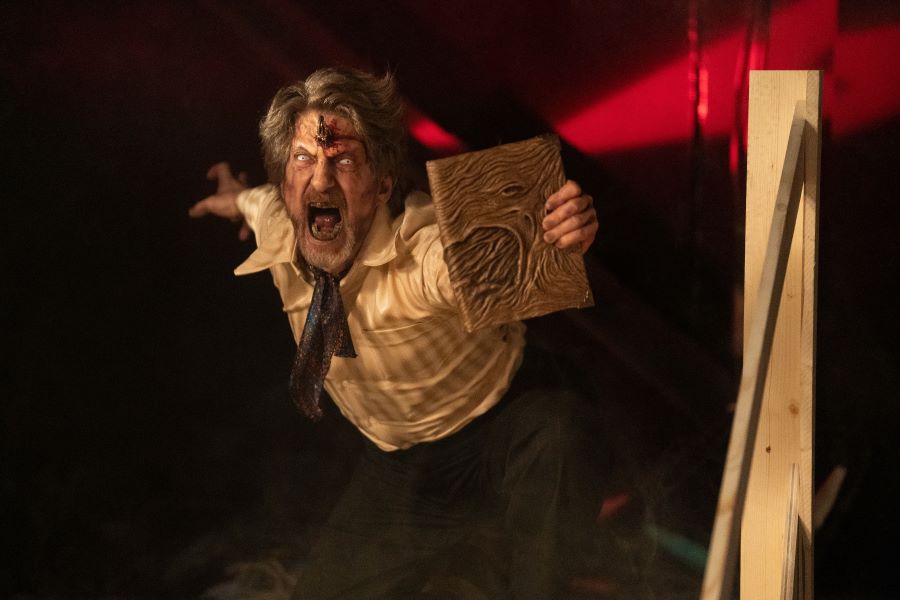 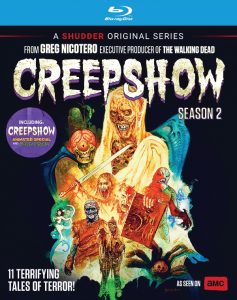 RLJE Films has set a Dec. 7 DVD and Blu-ray Disc release date for season two of “Creepshow,” the horror anthology series from Shudder that is based on the 1982 film of the same name.

Shudder is AMC Networks’ streaming service for horror, thriller and the supernatural. “Creepshow” was launched in 2019, with the second season debuting in April 2021 and season three last September.

In season two, a comic book once gain comes to life in nine chilling tales told across five episodes.

Special features on the DVD and Blu-ray Disc release include: 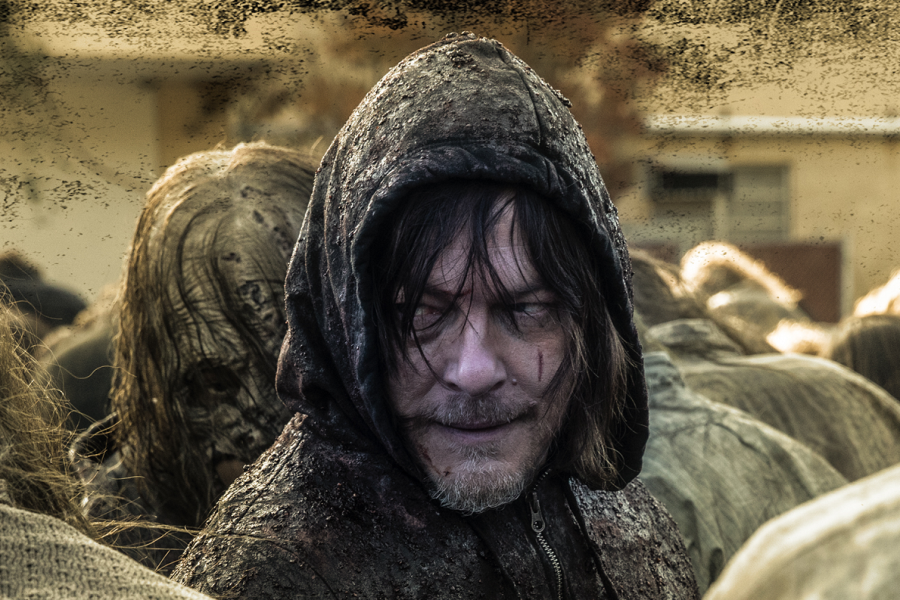 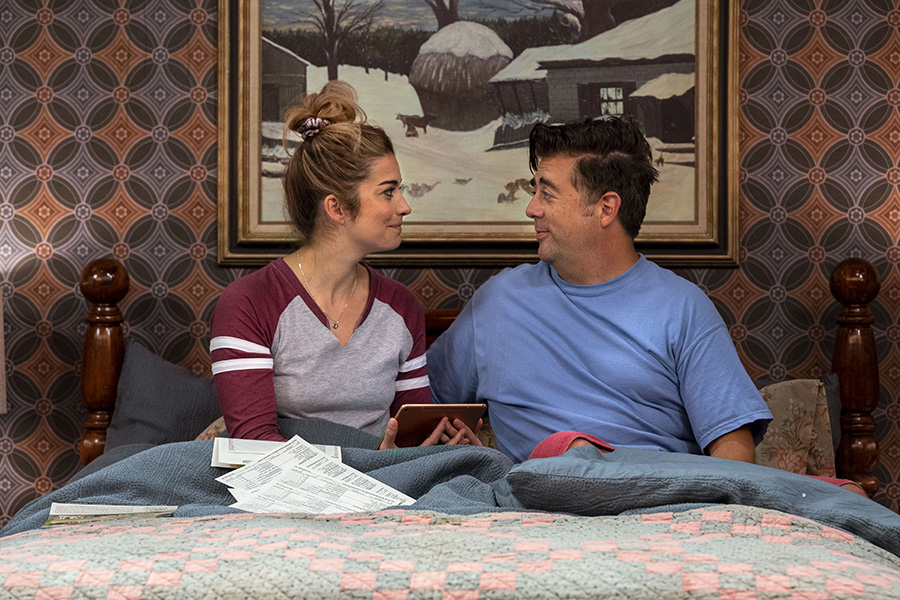 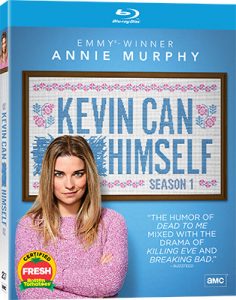 The dark comedy series stars Emmy winner Annie Murphy of “Schitt’s Creek” as Allison McRoberts, a prototypical sitcom wife married to Kevin (Eric Petersen), her self-centered husband. When she learns that the perfect future she envisioned is impossible, she teams up with her neighbor Patty (Mary Hollis Inboden) as she attempts to escape her confines and take control of her life.

Allison’s life with Kevin is presented in a sitcom format with corny jokes and canned laughter. But when she leaves the scene, her life is presented as a darkly lit drama.

The cast also includes Alex Bonifer, Brian Howe and Raymond Lee. The show was created by Valerie Armstrong and was directed by Oz Rodriguez for the first two episodes and by Anna Dokoza for the rest. Season one of “Kevin Can F**K Himself” originally aired on AMC Networks in June 2021, with a second season coming in 2022 on AMC and AMC+.

The Blu-ray and DVD editions include all eight episodes, plus three featurettes: “A Look at the Series,” “Meet the Characters” and “Making of the Show.”

AMC Theatres On Demand offers more than 5,000 movies from every major studio and independent film distributors, available for purchase or rent.

“Utilizing Whip Media’s platform, allows for more collaboration leading to greater efficiencies, thus allowing us to get more value from our content,” said Nikkole Denson-Randolph, VP of content strategy and inclusive programming at AMC Theatres. “The ability to automate our VOD supply chain, and seamlessly connect to our studios and content readiness partners, provides a huge advantage and ability to drive growth in our business.”

“AMC is a true innovator in the industry for providing a premier movie-watching experience to viewers in the theater or at home,” said Carol Hanley, president of Whip Media. “We’re thrilled to have partnered with AMC to power AMC Theatres on Demand for their millions of customers and provide an infrastructure that is efficient and scalable.”

Verizon’s portfolio of free subscription streaming services offered to new phone, wireless and broadband subs has a new member. Starting Aug. 12, new Fios customers at all speeds, or customers with select Verizon Unlimited plans, can receive up to 12 months of AMC+, the platform featuring content from AMC Network, Shudder, Sundance Now, IFC Films Unlimited, including early access to episodes of the final season of “The Walking Dead,” beginning Aug. 15.

“Enhancing the way that fans enjoy their beloved content is at the center of what we do at Verizon,” said Erin McPherson, head of content partnerships at Verizon.

Eligible Verizon customers will be able to stream the final season of “The Walking Dead” premiere one week before it appears on television.

“Over the last year, we have seen tremendous interest in AMC+ from consumers and our distribution partners, and the launch of this new partnership with Verizon couldn’t be better timed,” said Josh Reader, president of distribution and development for AMC Networks. 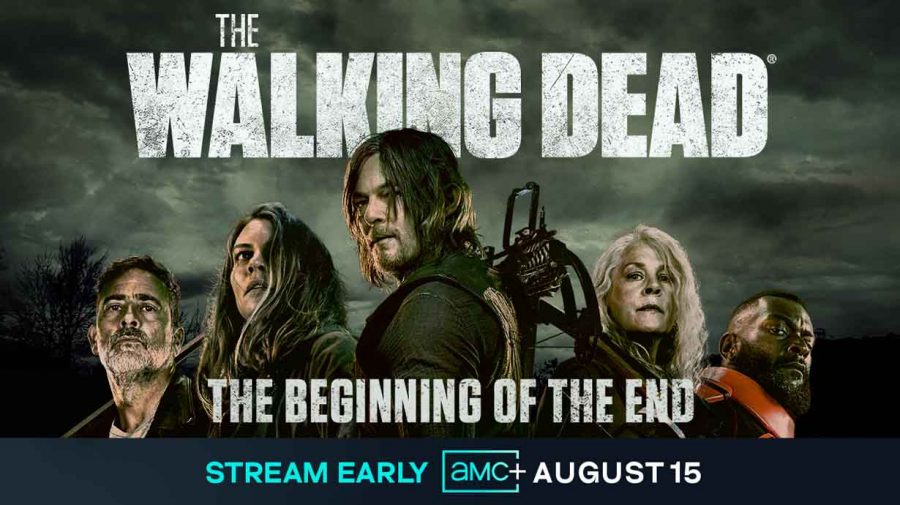 AMC programming includes “Mad Men,” “Rectify,” “Orphan Black,” “Portlandia,” “Hell on Wheels,” “NOS4A2,” among many others. The service also offers a growing slate of original and exclusive series, including “Gangs of London,” “The North Water,” “The Beast Must Die,” “The Salisbury Poisonings,” “Cold Courage,” “Spy City,” “Too Close” and the forthcoming drama “Kin.”

When activating a new line, a new or existing Verizon customer who purchases a 5G phone with a device payment plan on a Play More, Do More, or Get More Unlimited plan gets 12 months of AMC+. Existing customers on Verizon Unlimited plans get six months of free streaming.

When all promotional periods end, subscribers are automatically rolled over into $8.99 monthly subscription plan unless deactivated by the customer.

New Verizon Fios customers who sign up for one of the new Mix & Match on Fios home Internet plans — with no data caps and no annual contracts — get 12 months of AMC+.

Customers who sign up for Fios Gigabit may also be eligible for other perks of Fios, including a free Samsung Chromebook, Verizon Whole-Home Wi-Fi for getting better coverage in more areas of the home, and 2TB of Verizon Cloud storage.

The agreement enables AMC to avoid a scheduled April 4, 2022, trial date that had consolidated two separate breach of contract lawsuits filed by Darabont and CAA against AMC.

“With regard to the ‘settlement payment,’ the company has taken a charge of approximately $143 million in the quarter ended June 30, in consideration for the extinguishment of plaintiffs’ rights to any compensation in connection with ‘The Walking Dead’ and any related programs and the dismissal of the actions with prejudice, which amount is net of approximately $57 million of ordinary course accrued participations,” AMC disclosed in the regulatory filing.

AMC updated its fiscal 2021 guidance, contending the settlement would effectively negate any free cash flow in the fiscal year.

Darabont adapted “The Walking Dead” for AMC in 2010 based on the comic book series penned by Robert Kirkman. Darabont was fired early in the second season of the burgeoning hit due to conflicts with AMC.

“Walking Dead” would go on to become one of the biggest shows ever on television, DVD/Blu-ray Disc and Netflix, with the original series slated to end following the 11th season, which begins Aug. 22. Multiple spin-off shows will continue thereafter. 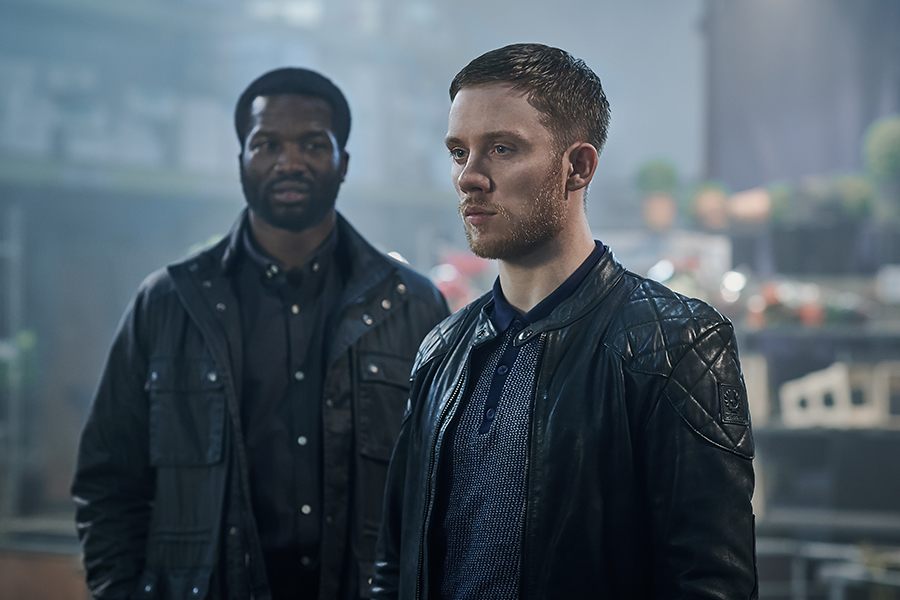 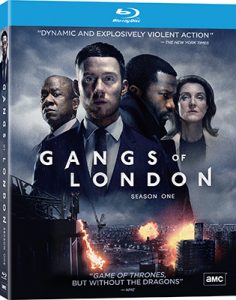 RLJE Films, a division of AMC Networks, will release Gangs of London: Season One on Blu-ray Disc and DVD July 20.

The season originally aired on AMC+, a premium streaming bundle.

For 20 years, Finn Wallace (Meaney) was the most powerful criminal in London. Billions of pounds flowed through his organization each year. But now he’s dead — and nobody knows who ordered the hit. With rivals everywhere, it’s up to the impulsive Sean Wallace (Cole), with the help of the Dumani family headed by Ed Dumani (Msamati), to take his father’s place. If the situation wasn’t already dangerous enough, Sean’s assumption of power causes ripples in the world of international crime. Perhaps the one man who might be able to help him and be his ally is Elliot Finch (Dìrísù), who up until now, has been one of life’s losers, a lowlife chancer with a mysterious interest in the Wallace family.  But as the wind of fate blows, Elliot finds himself transported to the inner workings of the largest criminal organization in London. It doesn’t end with the Wallaces though, there are shadowy higher powers at play.

Bonus Features on the DVD and Blu-ray include the featurettes “An Inside Look at The World, The Families, The Action, The Power, The Soldier” and “Anatomy of an Action Scene: Pub Fight & Elliot vs Len” featuring commentary from Gareth Evans. 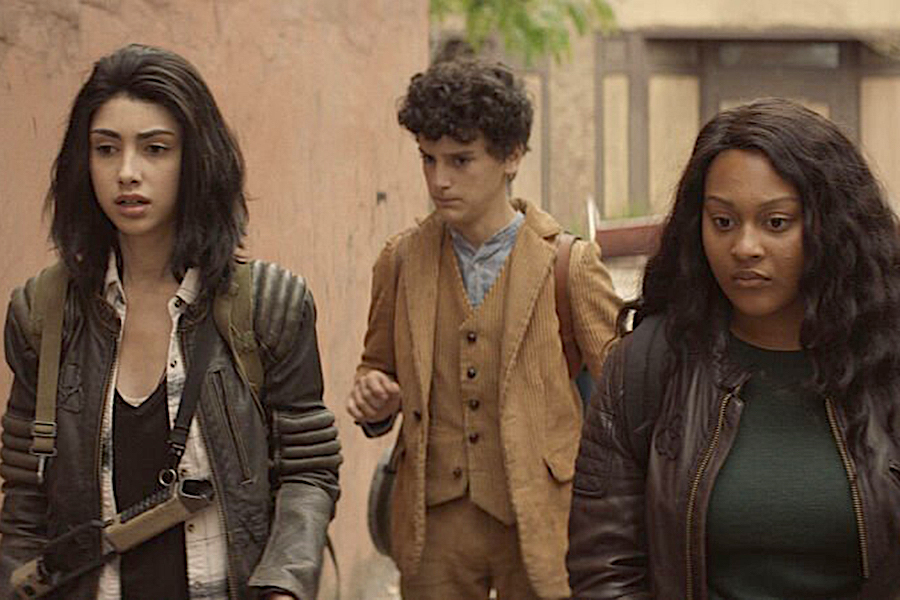 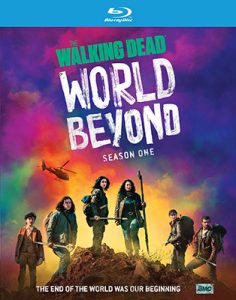 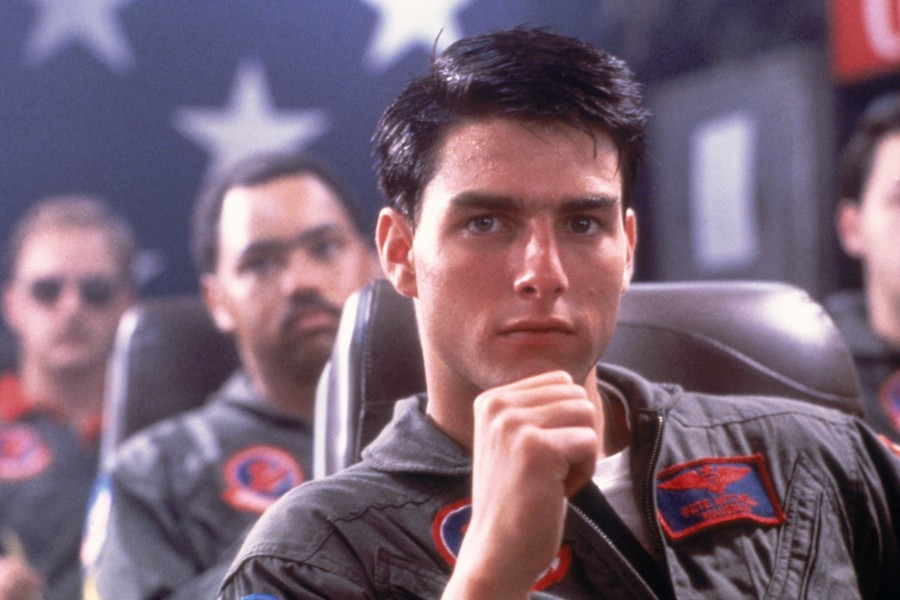