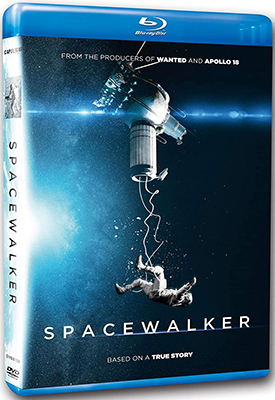 The Russian film Spacewalker takes a look at the Soviet side of the space race by focusing on the 1965 mission in which Alexei Leonov became the first person to perform an EVA.

The story plays a bit like a cross between The Right Stuff and Apollo 13, providing a harrowing story of spaceflight most Americans will be wholly unfamiliar with beyond the milestones achieved, if that.

By the mid 1960s, the United States and the Soviet Union were locked in a race to put the first man on the moon, a target America had boldly set after being beaten by the Soviets to a number of spaceflight milestones, such as the Sputnik, the first object to reach orbit, in 1957, and the first person in space, Yuri Gagarin in 1961.

There were a couple of key differences between the American and Soviet space programs. First, the U.S. was more transparent with the progress and goals of its space program, while the Russians conducted theirs behind a veil of secrecy. So, while the American NASA would publicly announce timetables for its mission goals, the Soviet space agency wouldn’t announce anything until it had already done it, and even then it had a tendency to lie about how successful it was.

That’s due largely to the second key difference between the programs — the Soviets were a bit more lax in their safety standards, which could result in cutting corners on the engineering of their spacecraft, since a lot of their motivation was simply to show up the West. (America would learn the lesson of trying to rush through goals with the Apollo 1 fire in 1967.)

Spacewalker begins in 1963, with the chief Soviet designer, Sergei Korolev (Vladimir Ilyin) learning details of America’s Gemini program — in particular plans to conduct an extravehicular activity in 1965. So, Korolev advances his own timetable by two years in an effort to beat the Americans.

The crew chosen for the mission are Pavel Belyayev (Konstantin Khabensky) and hotshot pilot Leonov (Yevgeny Mironov, also one of the film’s producers). However, moving up the timeline puts a lot of pressure on the crew’s training, not to mention the engineering team to get the spacecraft right. Korolev too is under tremendous political pressure simply to beat the Americans, a fact that weighs on his conscience as he seems to be the only one concerned with the safety of the cosmonauts. When he attempts to delay the mission for a year after a disastrous test flight, Leonov and Belyayev proudly volunteer anyway.

The launch of the Voskhod 2 mission in March 1965 (two-and-a-half months prior to Gemini IV, the first American spacewalk), seems to go off without a hitch, and offers one of the films highlights. However, the mission quickly becomes plagued by mishaps due to defects in the Voskhod capsule and Leonov’s spacesuit. While he completes the spacewalk, providing the few seconds of footage they proudly released to the world to demonstrate their space prowess, most of what happened next they kept hidden for the most part. Namely, that hardware malfunctions pushed the craft off course during re-entry and left the crew to fend for survival in an icy Russian forest trying not to freeze to death before a rescue team could locate them.

The fall of the Iron Curtain in the 1990s revealed that such miscues weren’t uncommon with the Russians, (most notably the later Soyuz 1 and 11 flights that resulted in the deaths of their crews). But even the aftermath of supposedly successful flights such as Leonov’s demonstrate the immense risks inherent in spaceflight that many people wouldn’t even consider.

The film looks great in high-definition and should be highly entertaining to space enthusiasts. It might be a harder sell to those without at least a passing familiarity with the space race, though it does present some valuable history and I hope it leads to more depictions of the Soviet side of spaceflight (contrasting with American depictions such as First Man and From the Earth to the Moon).

Being a Russian production, the film was shot in Russian and can be viewed in its native language with English subtitles. However, the default setting on the Blu-ray is to play an English dub, which is slightly awkward at first but becomes less distracting as the movie plays on. The film was known by several names as it toured the festival circuit beginning in 2017, from The Age of Pioneers to The Spacewalk, before being dubbed Spacewalker for its American release.

The Blu-ray includes two rather substantial bonus featurettes: the 26-minute “The First Walk in Space,” centered on an interview with the real Leonov (who died in 2019), and “The Story Behind Spacewalker,” a 25-minute look at the making of the film, including a detailed look at the creation of the impressive visual effects. Both are in Russian with English subtitles.