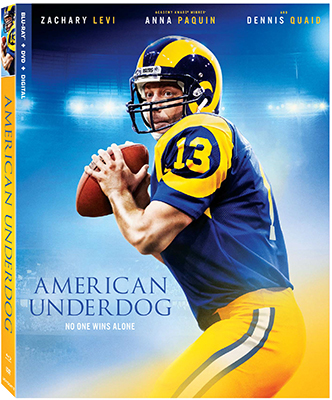 This biopic about NFL hall of famer Kurt Warner makes a fortuitous arrival on Blu-ray and DVD, landing on shelves with a prominent cover image of Warner in his bright blue and yellow Rams uniform just as the current version of the Rams are celebrating winning the Super Bowl.

In the meantime, the film also explores how Kurt (Zachary Levi) met his future wife Brenda (Anna Paquin). Falling instantly in love with her after seeing her dancing at a cowboy bar, he learns she’s a former marine and single mom whose divorce left her raising two small kids with the help of her parents. One of the kids, Zack (Hayden Zaller) is blind and developmentally disabled after the being accidentally dropped on his head as a baby.

The story is so schmaltzy, complete with the precocious little kid, that if it hadn’t actually happened it would seem like a string of sports movie tropes.

But because it’s based on a true story, American Underdog is an effective, heart-driven look at how Kurt Warner emerged from seemingly nowhere to become the NFL MVP and lead the Rams to a Super Bowl title. After playing in the Arena League, Warner attracts the attention of the Rams and gets a boost from their head coach, Dick Vermeil (Dennis Quaid). The rest is history

The American Underdog Blu-ray is absolutely stacked with bonus materials, offering an hour and a half of behind-the-scenes featurettes, 11 deleted scenes totaling nearly 18 minutes of excised footage, and an informative commentary track from directors Andrew and Jon Erwin with producer Kevin Downes.

Some of the real people depicted in the film, such as Kurt, Brenda and Vermeil, are heavily involved in the featurettes. Kurt, who executive produced the movie alongside Brenda, gets interviewed about the film in the 15-minute “Meet the Champion” featurette that also includes discussions with Vermeil and the filmmakers.

Other featurettes focus on the film’s faith-based message, the discovery of child actor Zaller, and things like the editing of the film and re-creating some of Warner’s football game, at times inter-splicing between new footage and archive tape from the games.

The most intriguing extra is a half-hour sit-down discussion with Vermeil, who is interviewed by “Saturday Night Live” actress Heidi Gardner, who explains she’s a huge Chiefs fan and is appreciative of Vermeil’s time coaching the Kansas City NFL club.

The deleted scenes provide a lot of great character moments that give more insight to what everyone in the film is going through in their lives.