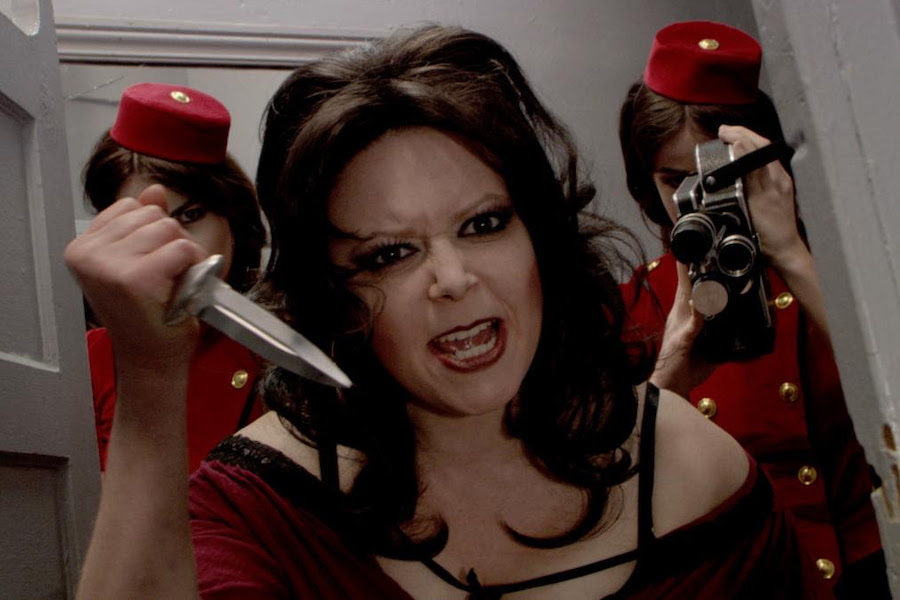 The horror films All About Evil and Faceless and the action adventure The Female Executioner are being released on Blu-ray Aug. 30 from MVD Entertainment Group and Severin Films. 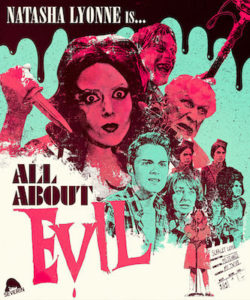 The 2010 cult classic All About Evil stars Natasha Lyonne (“Russian Doll,” “Orange Is the New Black”) as the mad projectionist, Thomas Dekker (“Terminator: The Sarah Connor Chronicles,” Kaboom), Cassandra Peterson (Elvira: Mistress of the Dark, Rob Zombie’s The Munsters), John Waters muse Mink Stole (Serial Mom, Hairspray) and Noah Segan (Knives Out, Looper).  In the film, a mousy librarian inherits her father’s beloved but failing old movie house. In order to save the family business she discovers her inner serial killer — and a legion of rabid gore fans — when she starts turning out a series of grisly shorts. What her fans don’t realize yet is that the murders in the movies are all too real. Special features include audio commentary with driter/director Joshua Grannell and actors Thomas Dekker, Ashley Fink, Jade Ramsey and Nikita Ramsey; a making of featurette with Grannell, producer Darren Stein, and actors Dekker, Fink, Cassandra Peterson, Jade Ramsey, Nikita Ramsey, Noah Segan, and Mink Stole; a roundtable discussion; “Evil Live: The Peaches Christ Experience In 4D” world premiere at The Castro Theatre in May 2010; “Grindhouse,” a 2003 short film by Grannell; “Children of the Popcorn — Behind The Scenes With Peaches Christ”; the 2010 making-of featurette; the trailer; a teaser; the soundtrack CD; and a bonus booklet by Michael Varrati. 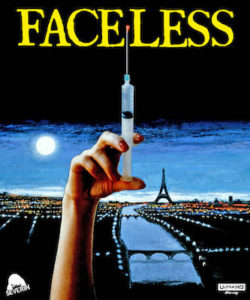 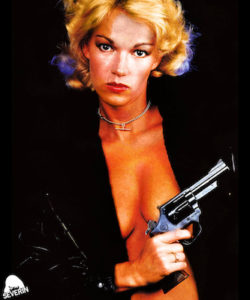 The 1986 French action adventure The Female Executioner stars legendary adult film performer Brigitte Lahaie, who launched her mainstream acting career — and subsequently became a French cultural icon — with this exploitation hit. Lahaie is Detective Martine Savignac, a tough vice cop who specializes in busting the most extreme pornographers. When a porno queenpin snatches her kid sister for revenge, Martine takes on a city full of pimps, pushers, human traffickers, the Chinese mob and every man she can. Michel Modo (“Highlander: The Series”), Pierre Oudry (Dirty War) and Dominique Erlanger (The House of the Missing Girls) co-star in this vigilante thriller written and directed by Euro-smut veteran Michel Caputo and produced by Lahaie’s then-lover René Chateau (Faceless). Scanned in 2K from the original negative, the film features new interviews with Caputo and Lahaie. Special features include “The Cop In Nylon Stockings,” an interview with Caputo and Lahaie; “Hold On Tight, Girly!,” a location visit with Caputo and Lahaie; The Blue Shutters, a 1987 short film starring Lahaie; and the trailer. 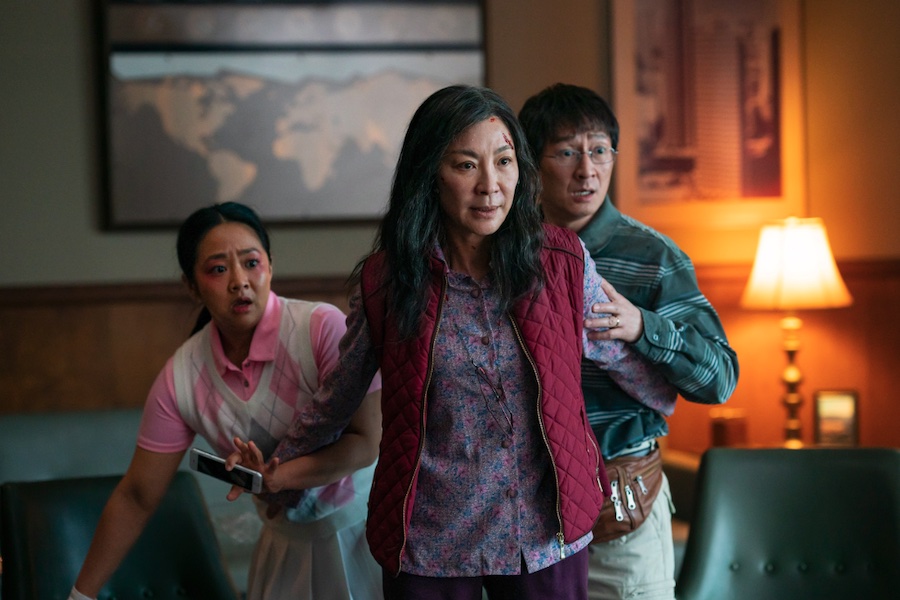 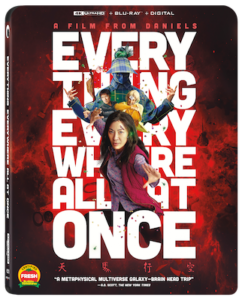 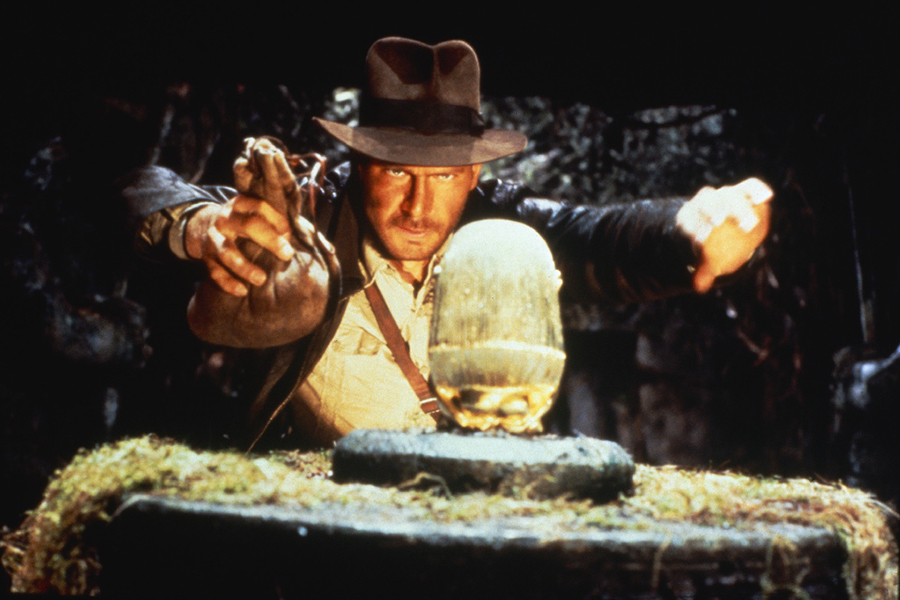 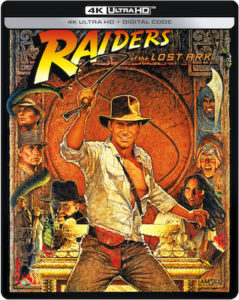 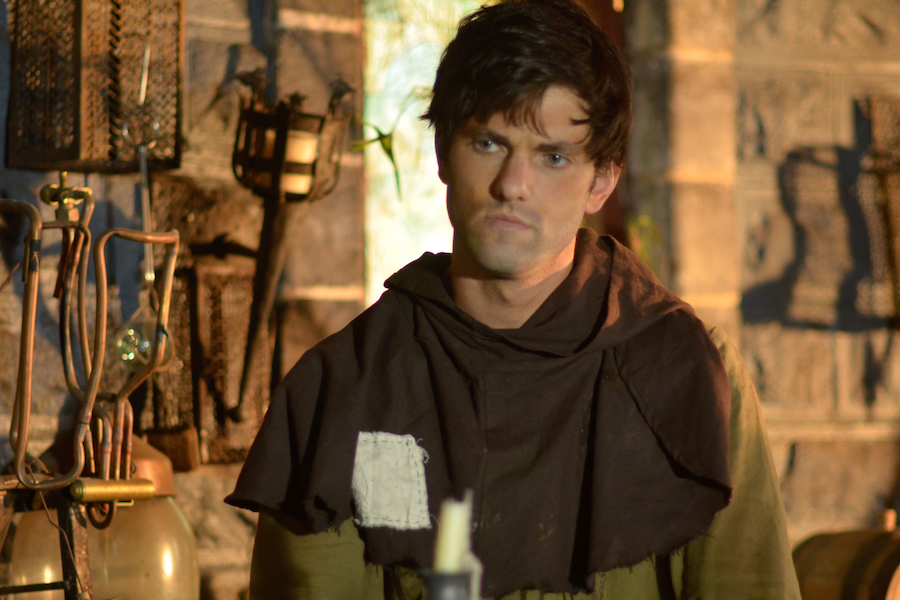 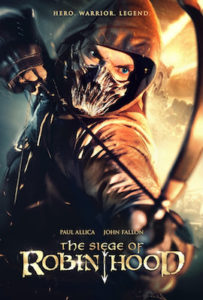 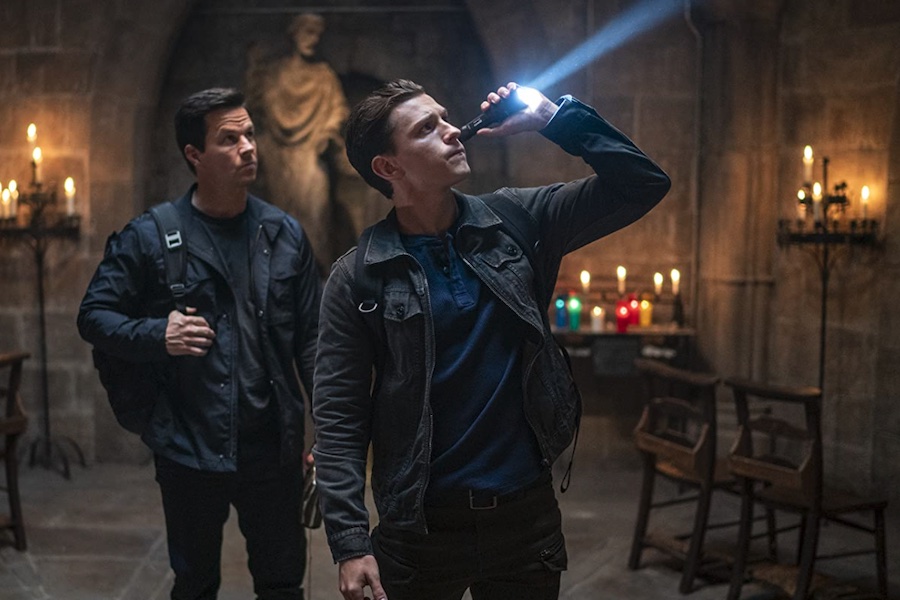 Sony Pictures’ Uncharted topped the chart of the 10 most-popular titles on Fandango’s transactional digital service Vudu the week ended May 1.

Debuting at No. 2 was Universal Pictures’ Michael Bay action thriller Ambulance, starring Jake Gyllenhaal. Available for premium digital rental and purchase, the film follows a veteran desperate for money who turns to his adoptive brother, a career criminal, who plans a heist.

Warner Bros.’ The Batman dropped from the top spot the previous week to No. 3 on the chart. The DC Comics-based superhero actioner, which debuted for premium digital rental and purchase April 18, stars Robert Pattinson as the caped crusader, who after more than a year of stalking the streets and striking fear into the hearts of criminals, dives deep into the shadows of Gotham City.

Falling from No. 2 to No. 4 on the chart was the canine buddy comedy Dog. Available for digital purchase, the MGM film follows an Army ranger (Channing Tatum, who also co-directs) who races down the Pacific Coast with an Army dog named Lulu to make it to a fellow soldier’s funeral on time. Along the way, they drive each other crazy.

Remaining at No. 5 on the chart was Lionsgate’s Roland Emmerich disaster film Moonfall, starring Halle Berry. Available for digital purchase beginning April 1 and newly available to rent, the film follows a space crew attempting to save the Earth when a mysterious force knocks the moon out of its orbit.

Vudu’s top 10 titles for the week ended May 1, in terms of revenue, were: 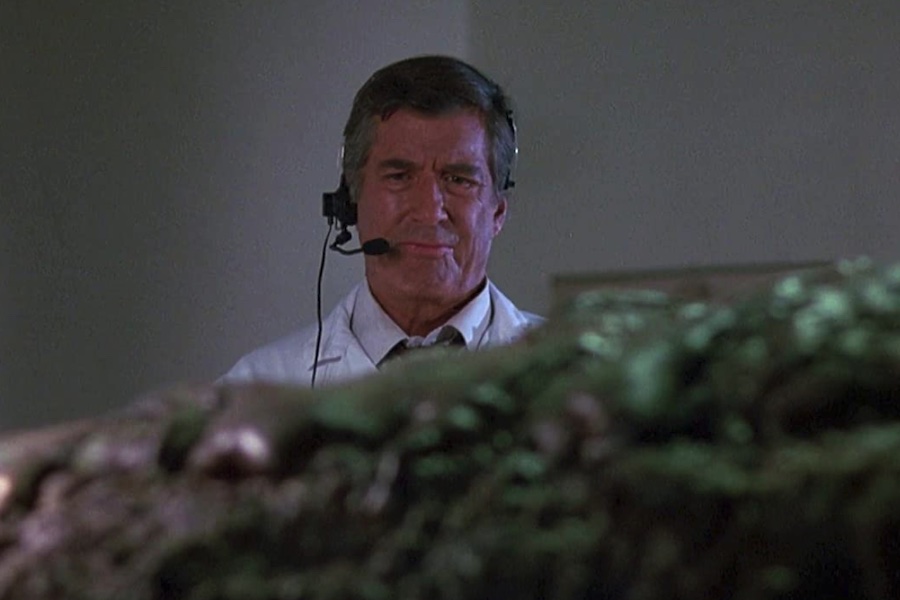 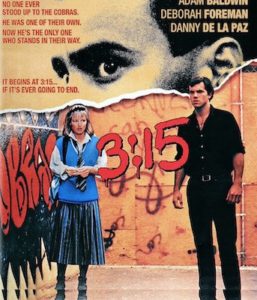 In the classic ’80s grindhouse film 3:15 (1986), “The Cobras” rule Lincoln High and everyone in it — everyone except Jeff Hanna. Once the most feared member of the Cobras, Hanna got sick of fighting and got out of the gang. Now the Cobras have brutalized his new girlfriend and threatened to kill him for his disloyalty. It’s time for one last fight. 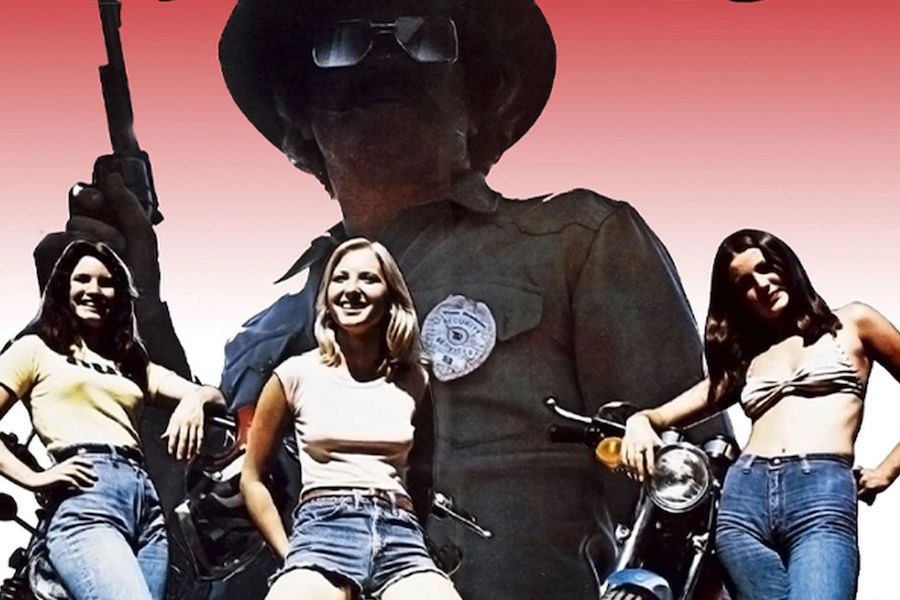 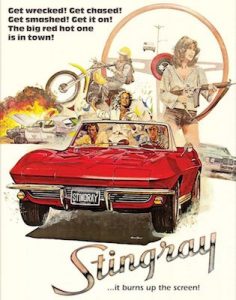 Writer-director Álex de la Iglesia’s Perdita Durango and The Day of the Beast are restored on 4K Ultra HD (in combo pack with Blu-ray) and Blu-ray Disc for the first time in America. In between his cult hit debut Accion Mutante and Perdita Durango, de la Iglesia delivered the international horror comedy smash The Day of the Beast, which won six Goya Awards, including Best Director. In the film, when a rogue priest (Álex Angulo of Pan’s Labyrinth) discovers the exact date The Antichrist will be born, he enlists a Death Metal record store clerk (Santiago Segura of Killer Barbys) and a cheesy TV psychic (Armando De Razza) for an urban spree to prevent the Apocalypse by summoning Satan himself. Terele Pávez (800 Bullets) co-stars. Special features include “Heirs of the Beast,” a feature length documentary by Diego López and David Pizarro on the making and cultural impact of the film; “Antichrist Superstar,” an interview with director Alex de la Iglesia; “The Man Who Saved the World,” an interview with actor Armando De Razza; “Beauty and the Beast,” an interview with actress Maria Grazia Cucinotta; “Shooting the Beast,” an interview with director of photography Flavio Martínez Labiano; “Mirindas Asesinas,” a 1990 short film by Alex de la Iglesia; and trailers.

Nosferatu in Venice (1988) and A Scream in the Streets (1973) are coming out on Blu-ray for the first time ever March 30 scanned in 2K from the original negatives. What was intended to be an unofficial sequel to Werner Herzog’s Nosferatu, Nosferatu in Venice instead became one of the most notoriously fascinating productions in EuroCult history. Klaus Kinski stars as the legendary vampire resurrected in modern-day Venice with an insatiable hunger for warm blood and rough sex. Donald Pleasence and Academy Award winner Christopher Plummer co-star in this shocker that features music by Oscar winner Vangelis (Chariots of Fire) and employed five different directors, including Mario Caiano (Nightmare Castle), Luigi Cozzi (Paganini Horror), writer-producer Augusto Caminito and reportedly Kinski himself. Special features include “Creation is Violent,” a new feature-length documentary on Kinski’s Final Years; “Creation is Violent Outtakes: – Nothing Bad Can Happen – Gypsies Should Be Played by Real Gypsies!”; and a trailer. From producer Harry Novak — whose Box Office International Pictures brought the world such classics as Axe, Mantis in Lace and Wham Bam Thank You, Spaceman — comes A Scream in the Streets, about a pair of L.A.P.D. detectives hunting a transvestite psychopath through a polyester jungle of massage parlor perverts, suburban sex fiends and violence-crazed cops. Directed by Carl Monson (Please Don’t Eat My Mother), the film stars Joshua Bryant (Enter the Devil), Sandy Carey (Drive-in Massacre), Linda York (Chain Gang Women) and Sharon Kelly (aka ’80s adult film superstar Colleen Brennan). Special features include “The Peeper — Two Sexy Shorts Produced From A Scream in the Streets outtakes” and a trailer.