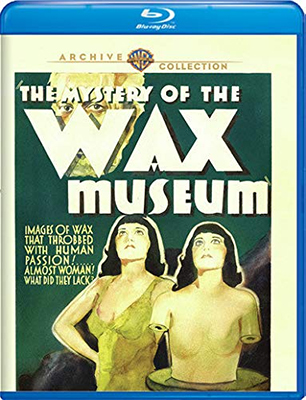 The Mystery of the Wax Museum

Available via Warner Archive
Warner, Horror, $21.99 Blu-ray, NR.
Stars Lionel Atwill, Fay Wray, Glenda Farrell, Frank McHugh.
1933. This above-and-beyond is even more impressive for licking the salvage job that had to be done as opposed to the movie’s visual content, which is by nature on the dark side for the film that was later remade in 1953 as House of Wax with Vincent Price.
Extras: Museum wouldn’t be a vintage Michael Curtiz picture on a recent Blu-ray if it didn’t serve up Curtiz biographer Alan Rode to offer a backgrounder, and he really has to fight the clock to fit his standard pro job into the tight 78-minute running time. This would all be enough for most discs, but there’s also a sweet tribute to Fay Wray, which includes not only Wray in archival interviews but Victoria Raskin, her daughter with screenwriter Robert Riskin and author of a recent book on her parents
Read the Full Review 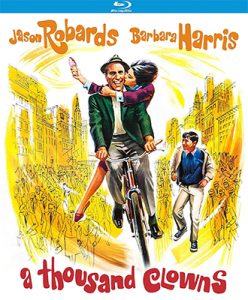 Kino Lorber, Comedy, $19.95 DVD, $29.95 Blu-ray, NR.
Stars Jason Robards, Barbara Harris, Barry Gordon, Martin Balsam, William Daniels.
1965. If there can be such a thing as a pro-hippie dropout movie geared for white guys, it has to be A Thousand Clowns, which in its own ragged way, almost by accident, also nearly comes off as “European” in its approach to 1960s cinema.
Extras: Former child actor Barry Gordon is on the main bonus extra here covering the basics of his career and offering opinions on how the movie evolved into an offbeat mess.
Read the Full Review