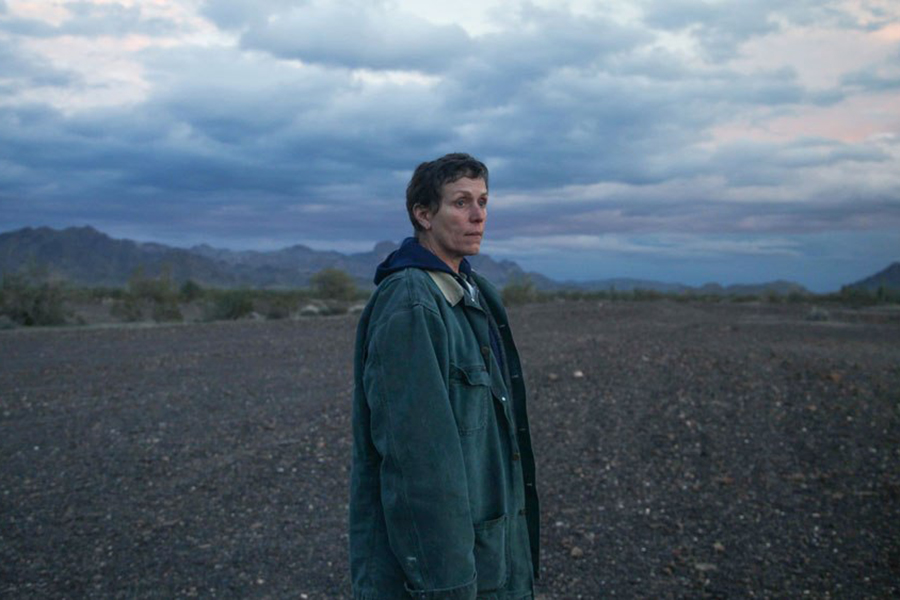 The Academy of Motion Picture Arts and Sciences, for their part, pushed back eligibility for the 93rd Academy Awards beyond the 2020 calendar year to movies released by Feb. 28, 2021.

Meanwhile, films available on Netflix, which has long sought to disrupt traditional theatrical distribution anyway, won seven trophies out of the 23 categories presented.

The Oscar for Best Picture went to Nomadland, an exploration of modern-day van life on the road starring Frances McDormand, who won Best Actress for the role, her third career Oscar in the category, putting her behind only Katharine Hepburn’s four. Nomadland also won Best Director for Chloé Zhao, who became only the second woman to ever win the directing Oscar, following Kathryn Bigelow for 2009’s The Hurt Locker. Zhao and McDormand as producers of Nomadland also received statuettes for its Best Picture win.

McDormand urged audiences to return to theaters as soon as possible and to watch Nomadland on the largest screen possible. It was released concurrently in theaters and on Hulu Feb. 19 (though it did screen at some film festivals and limited engagements last year), and became available for digital purchase April 13 before arriving on Blu-ray Disc April 27.

Sony Pictures’ The Father won Best Actor for Anthony Hopkins and for Best Adapted Screenplay. Hopkins, who won his second Best Actor Oscar after winning for playing Hannibal Lecter in 1991’s The Silence of the Lambs, at age 83 is now the oldest performer to win an acting Oscar for playing a man whose family must deal with his growing dementia. The film is available on premium VOD.

Warner’s Judas and the Black Messiah won Best Supporting Actor for Daniel Kaluuya and Best Original Song for “Fight for You.” The film was released in the United States by Warner Bros. Pictures Feb. 12 simultaneously in theaters and for streaming on HBO Max before coming to premium VOD April 2. It will be released for digital sellthrough April 27, and on Blu-ray Disc and DVD May 4.

Best Supporting Actress went to Yuh-Jung Youn for Minari. The veteran Korean actress plays the grandmother of a South Korean family that moves to the rural United States during the 1980s. Lionsgate will release the film on Blu-ray, DVD and digitally May 18.

Pixar’s Soul, which saw its theatrical release scrapped in lieu of a Christmas Day debut on Disney+ domestically (it played in theaters internationally), won two trophies, for Best Animated Feature and Best Original Score. It was released on Blu-ray, DVD, 4K Ultra HD Blu-ray and digitally March 23 by Disney.

Denmark’s Another Round won Best International Feature Film. A co-production with the Netherlands and Sweden, the dark comedy stars Mads Mikkelsen, Thomas Bo Larsen, Magnus Millang and Lars Ranthe as a group of friends who decide their lives would be happier if they drank enough alcohol to maintain a constant buzz without getting fully drunk. Another Round is available on Blu-ray, DVD and digital sellthrough from Samuel Goldwyn Films.

The live-action and animated Oscar winners also are available on Netflix. Best Live-Action Short Film Two Distant Strangers is about a black man caught in a time loop that always ends with him being killed by police. Best Animated Short Film If Anything Happens I Love You follows two grieving parents as they struggle to confront the death of their daughter, who was killed in a school shooting.

Another streaming original, Sound of Metal, released on Amazon Prime Video Dec. 4, won two Oscars, for Best Film Editing and Best Sound. The film stars Riz Ahmed as a metal drummer dealing with losing his hearing. The Best Sound category is a combination of the Sound Mixing and Sound Editing categories that had previously been presented separately.

Best Documentary Short Subject went to Colette, which follows former French Resistance member Colette Marin-Catherine as she travels to Germany for the first time in 74 years. The film was co-produced by Oculus and Respawn Entertainment as part of the documentary gallery for the virtual-reality video game Medal of Honor: Above and Beyond, making it the first Oscar nominee and winner produced by a video game studio.