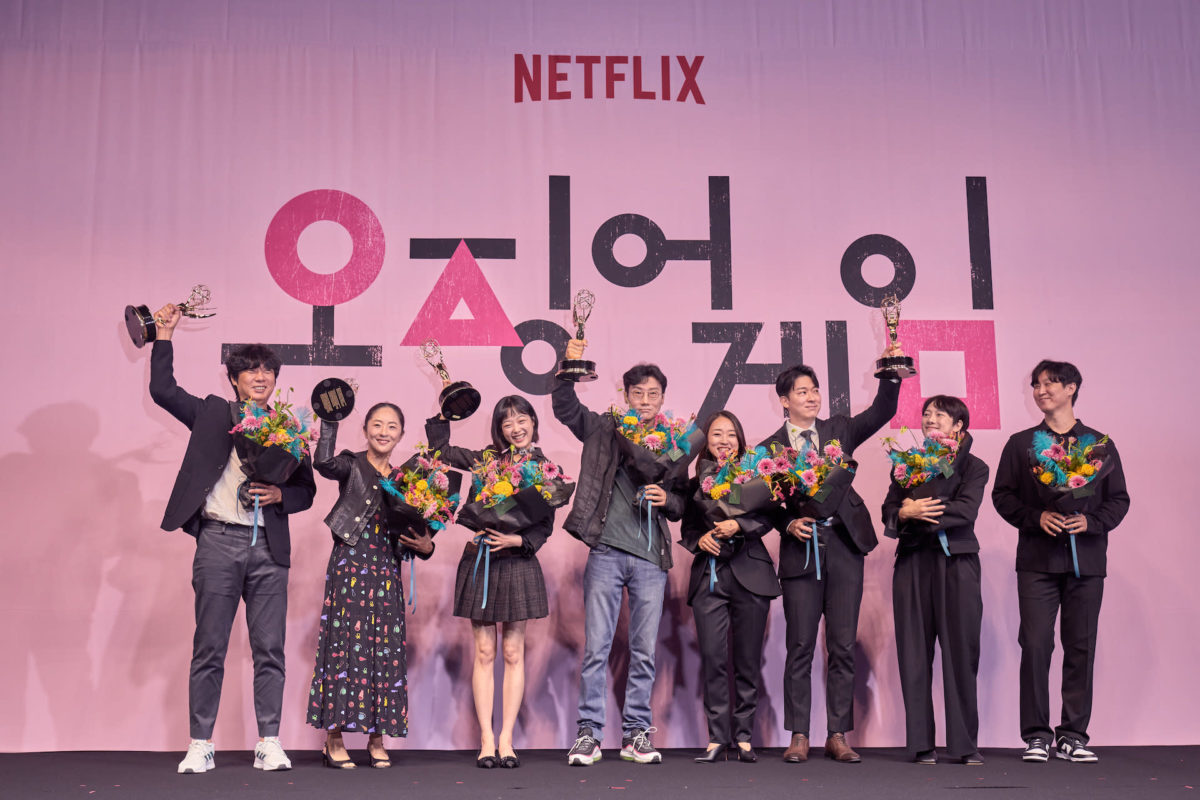 Squid Game debuted on Netflix on Sept. 17, 2021, and became a global phenomenon. The series clocked in more than 1.65 billion viewing hours in 28 days, and reached 111 million Netflix accounts, becoming streamer’s first series to surpass 100 million members at launch. The closest runner-up is the fourth season of “Stranger Things,” which has tracked more than 1.35 billion streaming hours in 28 days.

At a Sept. 15 press conference in Seoul, Hwang called the experience of accepting his award on stage a “once in a lifetime moment” and a “great honor” that was “overwhelming and mind-blowing.” Lee, through a pre-recorded video message at the press conference, said that hearing his name announced at the Emmys was “bewildering.” Expressing his delight and gratitude to fans of Squid Game and Korean content from all over the world, he added: “These wins are a happiness we all share together.”

The increasing global reach of Korean culture — be it television, film, music or food — was a theme the creators, cast and crew of “Squid Game” were all asked about at the presser. “We have always been hard at work,” Hwang said regarding Korean content creators. By leveraging the changing media environment and the entry of digital platforms like Netflix into global markets, the director said the hard work has been able to “blossom into something wonderful.” He hoped the show’s success would inspire and motivate not just Korean creators, but creators worldwide.

Prior to the Primetime Emmys, “Squid Game” picked up Creative Arts Emmys for special visual effects in a single episode; stunt performance; production design; and Guest Actress in a Drama Series. This last award was won by Lee You-mi, who became the first South Korean actress to win in this category, and the first actor to do so for a non-English language performance. “Squid Game” is also the first Korean series to be nominated for below-the-line production categories, and the first non-English language show to win at the Creative Arts Emmys.

In fact, the show’s nominations alone have made history at the Emmys. Squid Game is the first non-English-language show to be nominated for Outstanding Drama Series. Hwang was also nominated for outstanding writing for a drama series, making him the first Korean showrunner to score nods for both writing and directing.

Actors Lee Jung-jae, Park Hae-soo, Jung Ho-yeon, Oh Young-soo and Lee You-mi were all the first native Korean actors to be nominated in their respective categories. As executive producers, Hwang and Kim Ji-yeon became the smallest producing team to be nominated for a drama series since “Murder She Wrote” in 1987.

“It has been a long journey of many surprises, and an emotional rollercoaster,” said executive producer Kim. “Times have changed, and we are truly living in a global era. In the past, only people who spoke Korean and knew about Korean culture would watch our content. Now, platforms like Netflix allow this content to reach so many more people. Through this exposure, our understanding of other cultures has deepened.”

Stunt performer Lee Tae-young echoed the sentiments of Hwang, Lee and Kim when he spoke about his hope that the accolades won by Squid Game would open more doors for Korean creators, performers and crew members. “We pour our heart and soul into our work. We have a lot of grit and passion,” he said. “This award for the stunt team recognizes the efforts of all stunt performers in South Korea, and I hope it will lead to better opportunities for the next generation.”

In June, Netflix confirmed the second season of “Squid Game” was in the works. At the press conference, Hwang revealed that he was currently working on the script for the new season and has decided on the lethal games that will appear in it. But he revealed no further details and urged everyone to keep spoilers to themselves even if they came across rumors online. “You cannot let anyone know,” he urged. “Suspense is a huge part of the experience.” 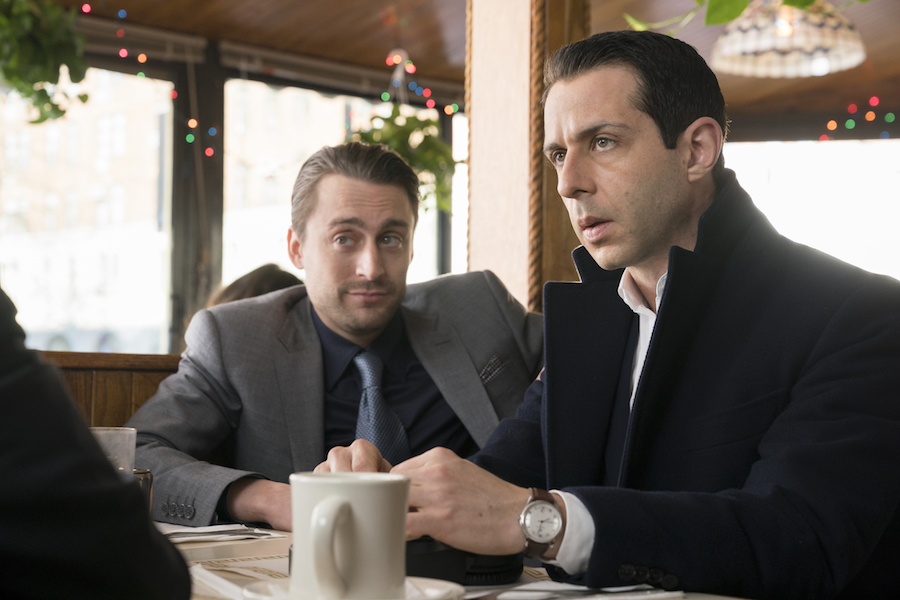 Warner Bros. Discovery’s HBO and HBO Max entered the 74th Annual Emmy Awards with a leading 140 nominations. It walked away from the Sept. 12 awards with 38 wins, including Outstanding Limited or Anthology Series for “The White Lotus,” Outstanding Drama Series for “Succession,” Outstanding Lead Actress in a Drama Series for Zendaya in “Euphoria,” and Hollywood veteran Jean Smart winning Outstanding Lead Comedy Actress for “Hacks.”
Perennial Emmy Awards champion Netflix walked away with 26 wins on 105 nominations, spearheaded by “Squid Game,” the first non-English language series up for a Primetime Emmy. The Korean dystopian series took home the Outstanding Director win for Hwang Dong-hyuk, and Outstanding Lead Actor in a Series for Lee Jung-jae, both first-time Asian winners in their respective categories.
For Apple TV+, original series “Ted Lasso” is the gift that keeps giving. The first and second seasons have now won for Outstanding Comedy Series in successive seasons — reportedly just the eighth time a show has achieved that.
Previous successive comedy series winners include “Modern Family,” “30 Rock,” “Frasier,” “The Golden Girls,” “Cheers,” “All in the Family” and “The Phil Silvers Show.”
Subscribe HERE to the FREE Media Play News Daily Newsletter!
The second season of “Ted Lasso” earned four wins, including Emmys for Outstanding Lead Actor in a Comedy Series (Jason Sudeikis), Outstanding Supporting Actor in a Comedy Series (Brett Goldstein), and Outstanding Directing for a Comedy Series (MJ Delaney).
“It has been such an honor for all of us at Apple to collaborate with the exceptionally gifted cast and creative team to bring this heartwarming, hilarious, and kind series to the screen,” Zack Van Amburg, Apple’s head of worldwide video, said in a statement.
In total, Apple TV+ landed nine Emmy Awards, including five Creative Arts Emmy Awards with “Carpool Karaoke: The Series” earning the top honor for Outstanding Short Form Comedy, its fifth win in a row; celebrated Best Drama Series nominee “Severance” making its Emmy debut with two wins including Outstanding Music Composition for a Series and Outstanding Main Title Design; Apple’s critically acclaimed “Schmigadoon!” winning Outstanding Original Music and Lyrics; and dramatic mystery series “Home Before Dark” landing the previously announced juried award for Outstanding Motion Design.
Apple original series, films and documentaries have now generated 275 wins and 1,152 award nominations and counting, including this year’s historic win at the Oscars as CODA took home Best Picture and made Apple the first streamer to win the category.

Disney won 26 Emmys on 117 nominations across both broadcast and streaming channels, including ABC, FX, National Geographic, Disney+ and Hulu.

The media giant earned 26 awards, including Michael Keaton for Outstanding Lead Actor in a Limited Series (“Dopesick”) playing a small-town doctor overwhelmed by the opioid crisis. Amanda Seyfried was a first-time Emmy winner (Outstanding Lead Actress in Limited or Anthology Series) portraying Elizabeth Holmes, the disgraced founder of Theranos, in “The Dropout.”

Finally, Amazon Prime Video scored its only Emmy for the reality dance competition “Watch Out for the Big Grrrls,” where women compete for gigs as backup singers for music performer Lizzo.