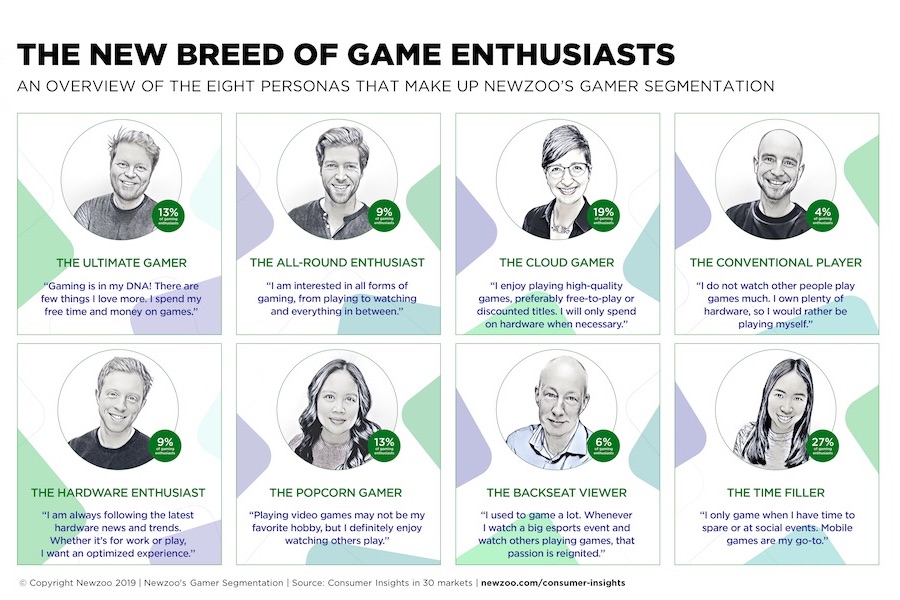 There are more than 1 billion female game enthusiasts in the world, representing 46% of that population, but they have different tastes, according to a study from NewZoo.

The recently launched Gamer Segmentation™ study separated gamers into eight personas, some over- and some under-indexing based on gender. NewZoo used new Consumer Insights from its latest round of primary research in 30 key markets.

Across all 30 markets, the top persona among female game enthusiasts is the Time Filler, a person who plays games, typically on mobile, to pass the time. Over a third of all female game enthusiasts fall within this group. The group also exhibits the biggest gender differences, with 36% of women fitting this persona vs. just 19% of men. In fact, almost two-thirds of all Time Fillers are women.

The second-most prominent persona among female game enthusiasts is the Cloud Gamer, with 17%. Over a fifth of male gamers are in this group, making it their top persona. These gamers enjoy high-quality game experiences, preferably free-to-play or discounted titles, but only spend on hardware when necessary.

The No. 2 persona for men is Time Filler, followed by the Ultimate Gamer (15%). Ultimate Gamers love all things gaming — playing, owning, and viewing, and dedicate much of their free time and disposable income to the pastime. Male game enthusiasts are far likelier to be Ultimate Gamers than women: 15% vs. 9%, respectively.

Not all personas, however, exhibit clear gender differences. For example, around 6% of both men and women are Backseat Viewers, those who watch plenty of gaming video content/esports on Twitch and YouTube but hardly ever play games.

In other findings, Ultimate Gamers were far likelier to be men than women, with men making up just under two-thirds of the group. In addition to all things gaming (playing, owning, and viewing), these consumers are likely to have an interest in computers, electronics, and gadgets and enjoy watching movies in their spare time. Compared to other personas, they are also likelier to live in a household with children. The largest share of Ultimate Gamers are males aged 21-35, accounting for over a third of gamers fitting this persona. Also, 19% of them are aged 26 to 30.