Consumers are three times more likely to discover a new show on a streaming platform than on a traditional network, according to Hub Entertainment Research’s “Conquering Content” study. 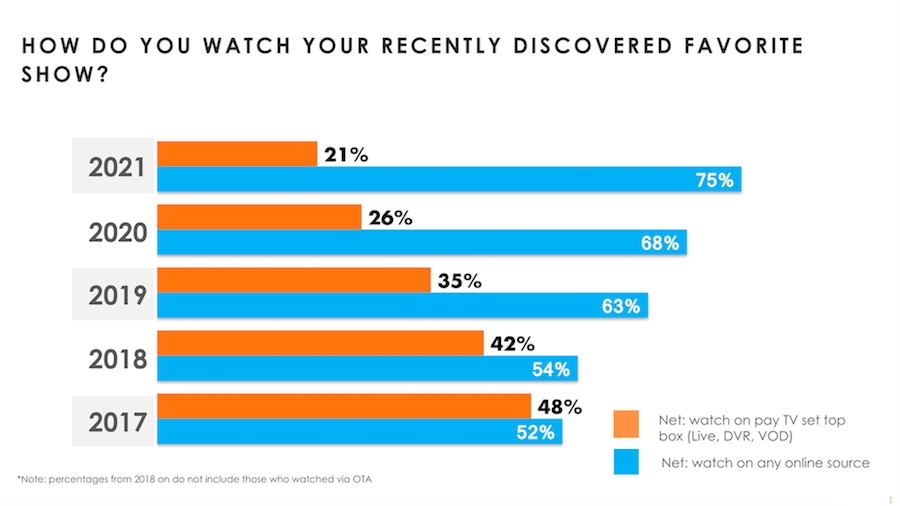 Netflix has lost some ground in the past year as the home for favorite shows, while the other “big five” streaming services have gained, according to the Hub study. Netflix is still the single most common destination for new show discovery, named by 35% of viewers. However, after growing each year since 2017, Netflix’s percentage has dipped three points since last year. At the same time, the percent discovering a new show on one of the other top streamers (Hulu, Amazon, HBO Max, or Disney+) has grown two points since 2020. 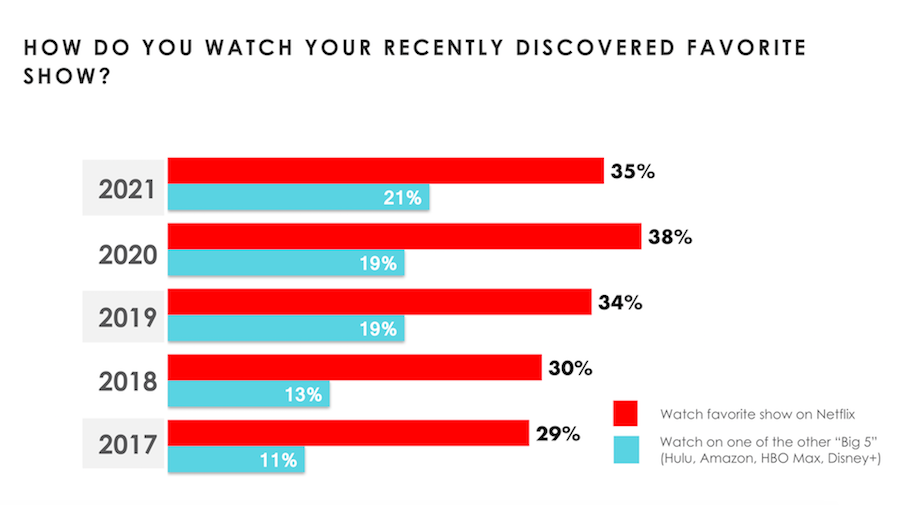 The study found four in 10 TV consumers said they had signed up for a streaming service to watch a single show or movie not available on any other platform in 2021 — up from 34% in 2020. Meanwhile, 77% of those signing up to watch one show said they ended up keeping the service once they watched.

For the first time since Hub has been tracking, a majority (53%) of TV consumers said they sometimes watch content from a free TV streaming service with ads, such as Pluto TV, Roku Channel, Tubi, IMDB TV and the free version of Peacock. That percentage is up 11 points since last year and 15 points since 2019. While FAST has been thought to be a lean-back experience, FAST viewers said that more than half the time (54%), they tune in to a FAST channel to watch a specific show or movie they know is available on the service.

“Netflix knew what it was doing back in 2013 when it prominently branded ‘House of Cards’ as a ‘Netflix Original,’” said Peter Fondulas, principal at Hub and co-author of the study, in a statement. “More than half of TV viewers say that simply touting a show as an ‘original’ makes them more interested in watching, which in turn leads them to sign up for fear of missing out. One burning question is whether viewers will similarly embrace ‘originals’ on FASTs like The Roku Channel (which this year launched a slate of original shows) — or whether those services are fated to be forever associated with older, nostalgia-friendly content.”

Hub’s “Conquering Content” study was conducted in October 2021 among 1,604 U.S. consumers with broadband, age 16-74, who watch at least one hour of TV per week.