The average U.S. SVOD household has access to almost 100,000 hours of content, delivered via 3.8 different services, according to research from Ampere Analysis.

It would take 11 years to watch it all back-to-back, and nearly 70 years if the average viewer watched an average of four hours per day, according to Ampere. The main factors driving this increase in content availability are consumer uptake of Amazon Prime’s booming portfolio and the addition of new services such as Disney+ to the household mix, according to the study.

SVOD engagement is even more prominent in households with young kids. Those households have access to nearly five different SVOD services, more than any other demographic. This is up significantly from 3.5 in the same period last year, largely due to the launch of Disney+, and the high uptake of the family-friendly service in the group, according to Ampere. The content available to this demographic group via the VOD services in their household now stands at an average of 102,000 hours.

Even adults who live alone have an average of 3.1 services, with the average one-person SVOD household having 85,500 hours — almost 10 years — of content at their fingertips. 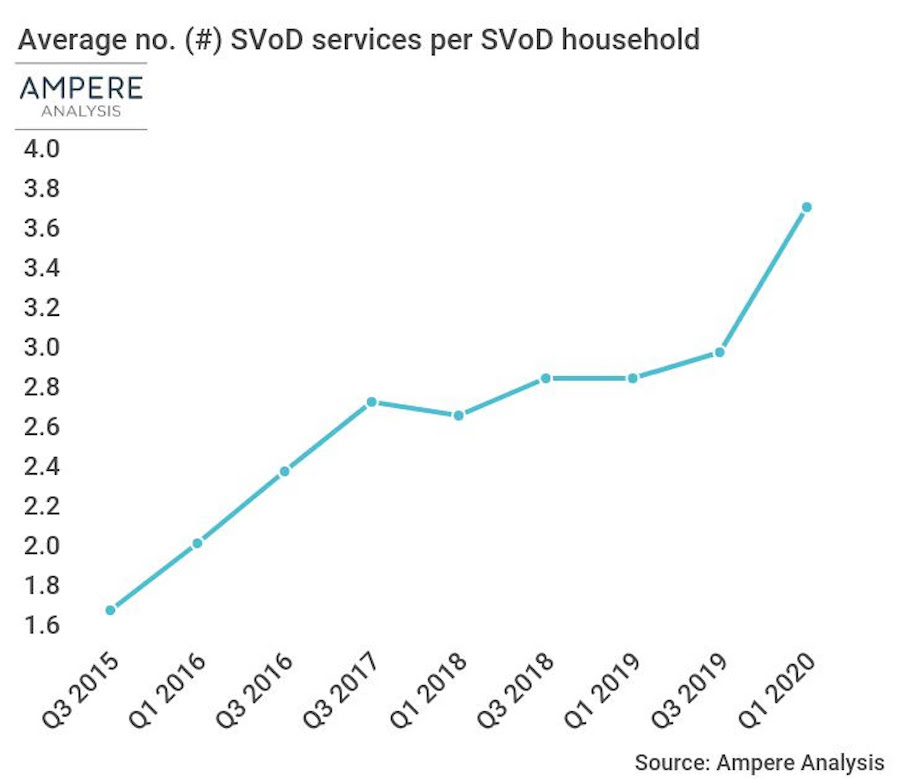 Almost one third of U.S. SVOD households subscribed to Disney+ in Q1 2020. The service comes with a 4,200-hour catalog and thus adds an average of 1,400 hours of content to the typical SVOD household’s portfolio, Ampere noted.

Amazon has more than doubled its content catalog in the United States since Q3 2017 according to Ampere Analytics data. The 60% of SVOD households who have both Netflix and Amazon accounts can access more than 100,000 hours of TV shows and movies.

“Consumers already have a vast amount of content at their disposal, and a U.S. household who subscribes to both Netflix and Amazon currently has access to more than 100,000 hours of content from those two services alone,” Ampere senior analyst Toby Holleran said in a statement. “As the market fragments further with additional direct-to-consumer services and households hit a spending ceiling, consumers will become more selective about their SVOD choices. The more expensive services, alongside those without a clear brand and proposition, will find the going gets tougher.”