Less than two weeks from the premiere of its third season, Netflix’s “Stranger Things” returned to the No. 1 spot on Parrot Analytics’ digital originals rankings the week ended June 22.

The show’s latest surge is undoubtedly due to the June 20 release of the season’s final trailer, which drew more than 9 million views on Netflix’s YouTube channel alone.

Netflix’s “Black Mirror,” which was No. 1 the previous week after the premiere of its fifth season, saw a 25.5% drop in expressions to 66.4 million, slipping to No. 2.

Netflix’s “When They See Us,” the controversial miniseries about the Central Park Five that was created, co-written, and directed by Ava DuVernay, stayed at No. 3, though its Demand Expressions dropped 18.7% to 41.8 million.

Hulu’s “The Handmaid’s Tale” jumped up a spot to No. 4, though its demand expressions dropped 1% to 41.6 million.

Rounding out the top five on the digital originals chart was Netflix’s “Lucifer,” down a spot from No. 4 the previous week. The series, based on a character from the DC Comics comic-book series “The Sandman,” dropped 8.4% in expressions to 43.3 million.

Marvel’s “Jessica Jones” jumped back onto the top 10 chart at No. 7, from No. 19 the previous week, with a 92.9% increase in expressions to 30.2 million. The third and final season of the show debuted on June 14 on Netflix, representing the end of Marvel’s contribution to the streaming service. 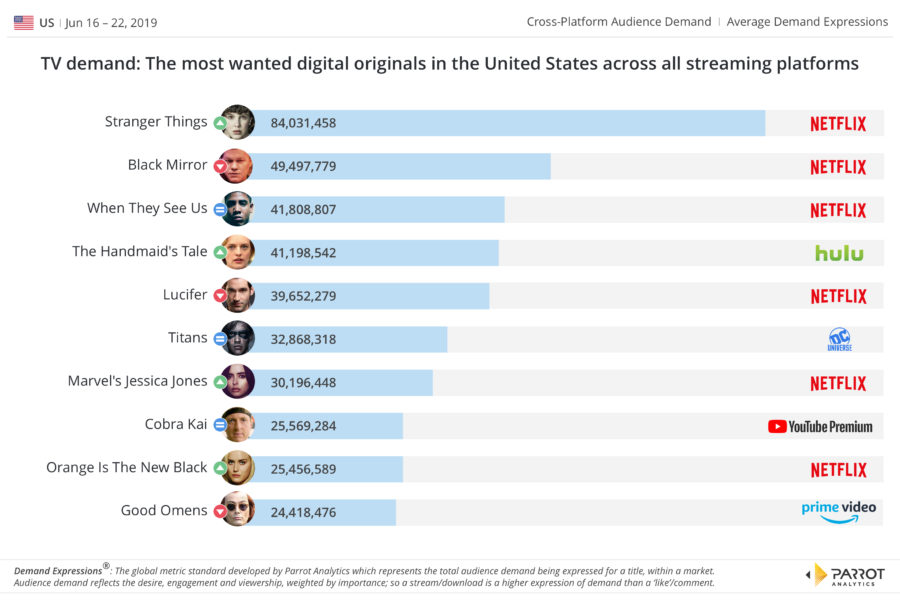