There were no changes to the top five on Parrot Analytics’ digital originals chart the week ended June 1, with “Stranger Things” remaining at No. 1 for the second consecutive week.

The third season of the Netflix science-fiction horror series, set in 1985, won’t debut until July 4, but the show shot to the top of the chart the prior week due to mounting hype – fueled by a clever marketing campaign that includes several real-world tie-ins, including the return of Coca-Cola’s ill-fated “New Coke,” introduced that year, and “Stranger Things”-inspired ice cream flavors at Baskin-Robbins.

Despite a subsequent 8.5% drop in Demand Expressions, “Stranger Things” retained its grip at No. 1, with 54.4 million Demand Expressions to 46.3 million for second-ranked “Lucifer,” based on a character from the DC Comics comic-book series “The Sandman.”

Demand for “Lucifer” was relatively unchanged from the prior week. The series stars Tom Ellis as Lucifer Morningstar, aka the devil, who moves to Los Angeles to run his own nightclub and serve as a consultant to the Los Angeles Police Department.

YouTube Premium’s “Cobra Kai,” a sequel to the 1984 movie The Karate Kid, again came in at No. 5 on the digital originals chart despite a 4% drop in Demand Expressions to 31.2 million.

Demand for Hulu’s “The Handmaid’s Tale” was up less than 6% from the prior week, but the bump was enough to send the dystopian drama to No. 6, up from No. 8 the prior week. 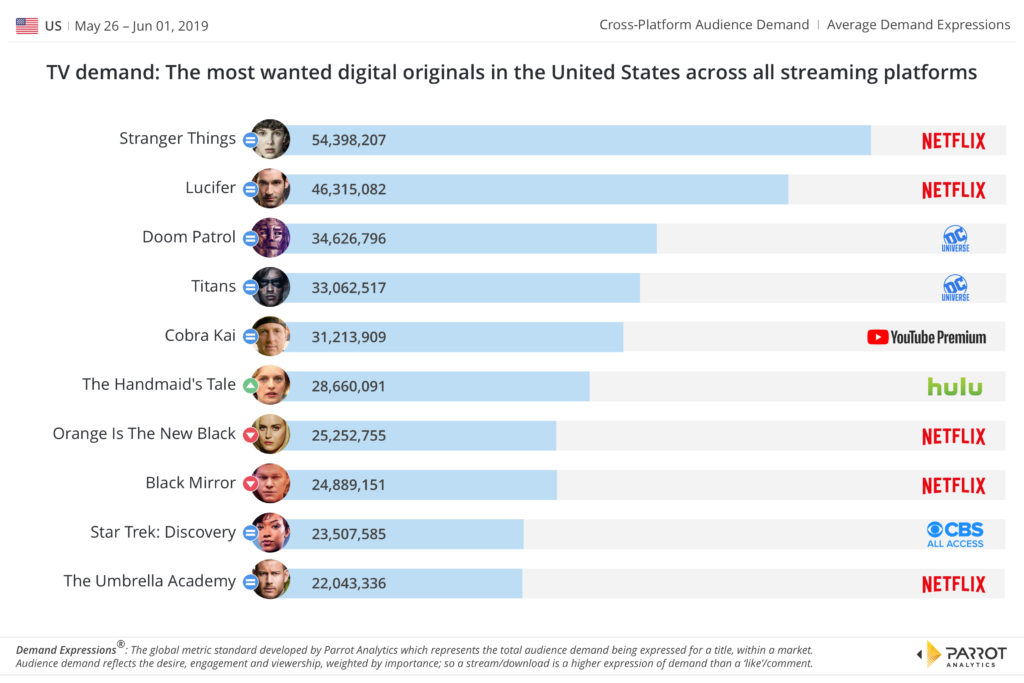