Netflix’s perennially popular “Stranger Things” returned to the No. 1 spot on Parrot Analytics’ digital originals U.S. chart the week ended May 1. It had 42.5 times the demand of an average series after a 1.1% rise in demand expressions, the proprietary metric Parrot uses to gauge a show’s popularity. It was No. 6 on Parrot’s list of all TV shows.

The show hasn’t bowed a new episode since the release of season three almost two years ago, and season four might not arrive until 2022.

The Disney+ original Marvel Cinematic Universe series “The Falcon and the Winter Soldier” dropped to No. 2 after two weeks on top. It had a 2.5% drop in demand expressions, giving it 42.4 times the demand of an average series. It was No. 7 on Parrot’s list of all TV shows.

Another Disney+ series, “WandaVision,” remained No. 3, registering another 5.1% drop in demand expressions, giving it 37.3 times average demand. It was No. 9 on the list of overall TV shows.

Disney+ had a third show in the top five digital originals with the live-action “Star Wars” series “The Mandalorian,” which held steady at No. 4, garnering 33.6 times the demand of the average show after a 4.4% dip in demand expressions.

Moving up three spots to No. 5 was Hulu’s “The Handmaid’s Tale,” which had a 25.8% rise in demand expressions after the first three episodes of season four arrived a day early, on April 27. It had 31.9 times average demand.

The biggest jump into the top 10 was Netflix’s “Shadow and Bone,” which premiered April 23. The fantasy series had a 95.6% rise in demand expressions to bring it to No. 8 with 25.9 times average demand. It had been No. 31 the week before.

Also making a move into the top 10, up two spots from the previous week, was the Apple TV+ alternate history series “For All Mankind,” which ended its second season April 23 with a harrowing episode that featured a tease for the third season. Demand expressions were up 2.1% to give it 23.2 times average demand.

The No. 1 overall TV series in terms of online demand was “SpongeBob SquarePants,” with 66.3 times average demand. 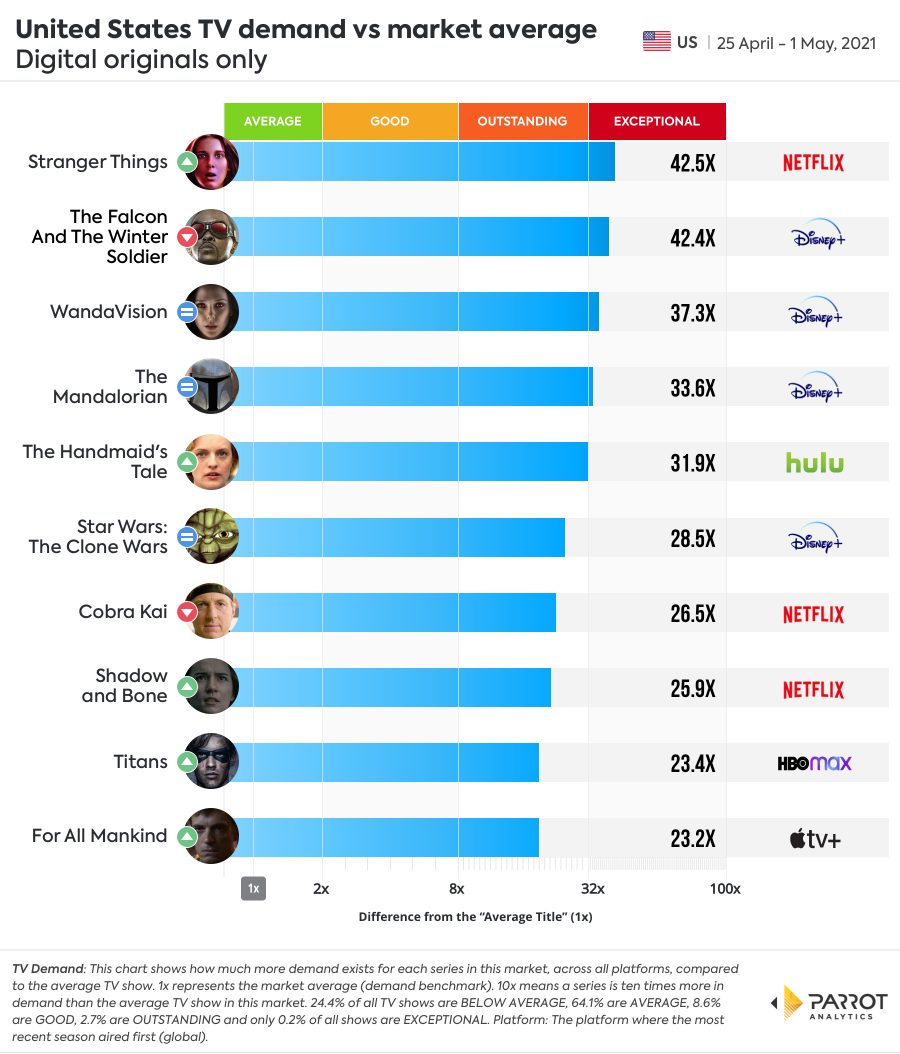