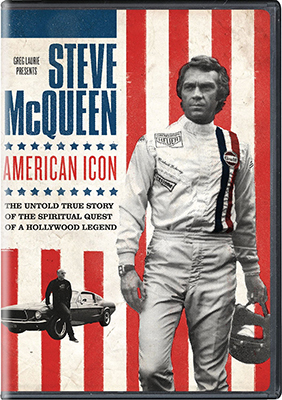 As boilerplate shorthand goes when it comes to documentaries that brandish “icon” in the title, 2017’s Steve McQueen: American Icon really throws the word around in the laziest cheerleading fashion from a few of its on-camera principals in the early going — leading one to suspect and fear that this portrait might turn out to be for fans only (if that). We live in an age when seemingly every actor who made it even a little is made a member of the “I” club, plating the suspicion that similar paeans to Percy Helton or maybe John Agar will eventually come our way.

Two things, though. If anyone was a screen icon, McQueen certainly was; past McQueen docs have carried titles like An American Rebel and The Essence of Cool — and at minimum, no one would dare argue with the second designation. And the other redeeming point is that a significant part of this feature-length limited theatrical release deals with a key part of McQueen’s life that never gets a whole lot of attention: his conversion to active Christianity at the very end of his days during his final rejection of the Hollywood rat race. The timing, of course, suggested something even more wistful: This life change   possibly came before he knew he was going to die but probably not before he knew something was really wrong with him. One of those interviewed notes that ultimate cancer victim McQueen’s cough on the set of his penultimate movie (Tom Horn) was the most horrible he’d ever heard.

You don’t have to go very far into the IMDb.com commentary section for this doc to note the griping from several moviegoers who saw Icon theatrically and felt burned at having walked into what was an ad, however softly the message was sold, for accepting Christ. I suppose if I’d paid top dollar here, I’d have felt a little singed myself, but as a rental or perhaps a viewing that you might fall into, it has its moments — and occasionally from unexpected sources.

One is the fairly extensive appearance of Mel Gibson, an apparent “friend of the production” and one who’s in no position these days to turn down the chance for some decent publicity. My first inclination was to say, “What the hell is he doing here” — but Gibson is so wired and enthusiastic talking about an actor he didn’t even know that it’s not tough to see how he turned into a director of some merit (though count me in with those who call The Passion of the Christ flagellation porn). Gibson is good talking in general about the life trade-offs that go with superstardom and more specifically in about the ways that McQueen obviously knew about camera placement and lenses (all the better to accentuate “cool”) and also the actor’s dexterity with props, which now seems obvious but is nonetheless a subject that hadn’t occurred to me.

The latter skill gets back to the story (oft-repeated and repeated here) of how the then relative newcomer McQueen drove Yul Brynner crazy on the set of The Magnificent Seven by cheekily stealing scenes with any gesture or doohickey that was at his disposal. It also may explain why McQueen was such a natural fit with his greatest role (as gunboat engine-room specialist Jake Holman in The Sand Pebbles). Oddly, that commercially brave blockbuster is noted only in passing, even though it got McQueen his only Oscar nomination (almost no performance in movie history has ever gotten to me more on a purely personal level). Similarly — and possibly because those involved in the production are vroom–vroom enthusiasts who lean more toward The Great Escape and Bullitt — there’s no mention of the doomed labor of love An Enemy of the People (as in Henrik Ibsen), which was McQueen’s only movie between 1974 and 1980 (his remaining two came out in 1980, the year he died at age 50). It rarely shows but is worth catching due to the tension between the actor’s on-paper obvious miscasting and the not unmoving personal passion he brought to the chore.

The doc’s other coup is the participation of widow Barbara Minty McQueen, who seems to have been a really good match for him despite the fact that he all but picked her out of a magazine that showcased one of her modeling assignments. This is a part of McQueen’s life that never comes up in general discussion too much, though Marshall Terrill’s biography (he’s extensively interviewed here and is one of the film’s producers) gives this chapter a lot of space — which includes, of course, the alternative-medicine trips to Mexico (where McQueen died post-op of a heart attack) after his diagnosis of mesothelioma (a specificity I’d forgotten and one that’ll make me look in a different way at the frequent TV spots that deal with the disease. This and other parts of the doc feature reel-to-reel audio from an extraordinary interview McQueen gave just two weeks before his death — this from an actor who went years turning down interviews of any kind except for one to a kid journalist who approached him for his school paper (which thoroughly exasperated the professional press). The last, of course, was when McQueen was in his extended “jerk” phase as the world’s highest paid actor, who was further charging $50,000 just to look at a script.

On the basis of opinions that seem pretty unanimous (and the pastors seen here seem like good guys), the conversion was sincere), which means the entire McQueen saga — impoverished childhood to worldly riches to inner peace in the twilight hours — is fraught with irony. I remember how Andrew Sarris apologized in print for knocking McQueen’s then incomprehensively listless performances in Tom Horn and swan song The Hunter, but the general public just didn’t know what was going on until the actor’s condition started making the national news (we see the evening broadcast clips here). Yet from The Magnificent Seven through The Towering Inferno, it was quite a run, and even some of the occasional box office failures are grabbers today (McQueen even shared a pre-Seven screen with Frank Sinatra himself in 1959’s Never So Few). I wouldn’t exactly include The Blob in this company (though a hit is a hit when you’re starting out), but certainly would include TV’s “Wanted Dead or Alive” — speaking of McQueen’s prowess with props. Though he would soon move on to objects with more horsepower, he was still working with a souped-up … Winchester.