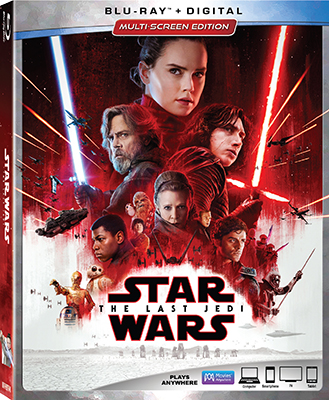 Writer-director Rian Johnson’s The Last Jedi is perhaps the most complex, thought-provoking “Star Wars” film to date in the way it asks its audience to reflect on their relationship with the franchise (a challenge many fans, it seems, were not up to). The result is a spectacularly entertaining film that deftly mixes thrills, nostalgia, emotion and humor.

The follow-up to 2015’s The Force Awakens, and the eighth of the numbered “Skywalker Saga” films in the “Star Wars” canon, answers some questions director J.J. Abrams left open in the previous film, while leaving more for Abrams to wrap up in the concluding chapter of this sequel trilogy that thus far represents the cornerstone of Disney’s cinematic plans for the franchise since acquiring Lucasfilm in 2012.

Picking up where Force Awakens left off, General Leia (the late Carrie Fisher, in her final film performance) and her Resistance fighters are on the run from the First Order, which is on the verge of seizing military control of the galaxy. Meanwhile, Jedi wannabe Rey (Daisy Ridley) has located the self-exiled Luke Skywalker (Mark Hamill), and works to convince him to join the fight, all while the villainous Kylo Ren (Adam Driver) hopes to turn her to his side.

Last Jedi is an improvement upon Force Awakens in many ways simply by not following so closely to the template of an earlier film (the 1977 original, in the case of Force Awakens), and not getting bogged down with trying to address every nagging plot thread from earlier films. (Seriously, to hear some fans tell it, they wouldn’t be satisfied unless Rey spent two hours sitting at a computer reading exposition about every new character from space-Wikipedia and narrating fan fiction.)

That isn’t to say the film pushes aside all tropes and familiarity. There are several plot points that echo previous installments, most notably Empire Strikes Back and Return of the Jedi, in keeping with the grand “Star Wars” tradition of intergalactic history playing out in cycles and new characters encountering situations similar to their predecessors, and having opportunities to make different choices. Indeed, Johnson at many points plays off the audience’s familiarity with these archetypes to purposely subvert their expectations, both for dramatic effect and as a bulwark against the franchise becoming stale. This is in many ways a film for the “Star Wars” fan who is willing to grow along with the franchise.

That’s not to say it’s a perfect film — some of the jokes and subplots have been criticized for straying too far from the formula. And certainly, the “Star Wars” films could benefit from a stricter storytelling structure that is rumored to be less of a priority at Lucasfilm than it is at fellow Disney company Marvel Studios. But for the most part, the film works exactly as it was intended to do.

Last Jedi is, at its core, a rumination on the nature of hero worship, and in forcing the characters to confront their preconceptions about the people and places they encounter, it also asks “Star Wars” fandom to make the same considerations. The film even gets meta at times, almost directly addressing the idea of obsessing over fan theories while also reminding us about the larger-than-life nature of the characters that made us want to experience their adventures in the first place.

The presentation offered by this absolutely loaded Blu-ray is a visual treat that preserves the big-screen splendor of the film’s gorgeous location photography and visual effects, including several scenes that are all-time franchise highlights.

The centerpiece of the extras is the 95-minute behind-the-scenes documentary The Director and the Jedi, an often-candid look at Johnson’s journey to bring the film to life, from the announcement of his involvement to the final photograph of the cast and crew.

For all that detractors may complain about their own vision for “Star Wars” not aligning with Disney’s, it’s clear that Johnson himself is a fan with a firm grasp of the franchise’s mythology.

There’s even more to learn in another 50-minutes of making-of featurettes, each dealing with specific scenes or concepts, such as an examination of the nature of the Force and looks at creating various battles. An especially fun one offers Andy Serkis’ on-set performance as Supreme Leader Snoke in his performance-capture suit before any of the character CGI is applied, and he’s just as menacing with little dots pasted to his face.

The Blu-ray also includes 14 deleted scenes running more than 24 minutes. While most of these are wise cuts (an extended chase sequence on the casino planet really tests one’s patience), many offer some fun moments of story and character.

Johnson provides an optional commentary on the deleted scenes, as well as for the film as a whole. It’s a solo commentary, and he and talks openly about recording it before the movie even hit theaters, which leads to some interesting passages where he ponders about how the audience will react to certain things, leaving viewers with their hindsight to fill in the rest. It’s an informative track, but also raises a few questions about just when these commentaries should be recorded.

For movies that even offer a home video commentary, they tend to be recorded just before the film’s theatrical release, likely due to scheduling concerns and possibly the idea that the filmmakers are better able to recollect certain details when it hasn’t been that long since the film wrapped. On the other hand, this might have been a good opportunity to get a few people involved with the production to record one after seeing the fan reaction and focusing it more on analysis and response. Perhaps taking such a tact is liable to raise more issues, and simply carrying on with the confidence of having created a good film is the more appropriate way to go, but it might have led to a damn interesting commentary track.

Speaking of damn interesting — and perhaps a bit of it’s about damn time — the digital version of the film offered through the Movies Anywhere service includes a score-only version of the film that puts composer John Williams’ excellent music front and center. The soundtrack version is available exclusively to Movies Anywhere accounts linked to an affiliated retailer where the film was purchased, or by redeeming the digital copy code included with the disc.

It’s a nice gesture that hopefully paves the way for music-only versions of the rest of the “Star Wars” films.