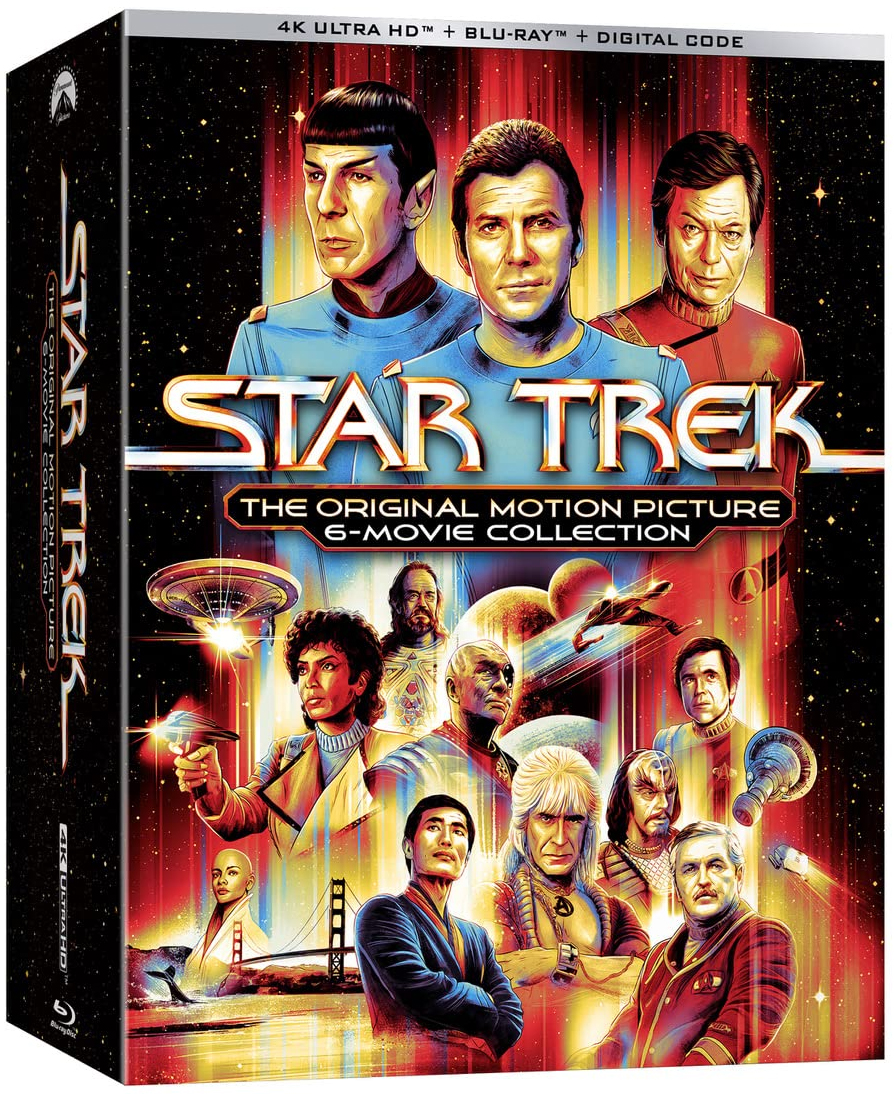 In conjunction with the Blu-ray release of Star Trek: The Motion Picture — The Director’s Cut, Paramount is also releasing all six films featuring the original “Star Trek” cast in 4K for the first time.

The first four movies — the Star Trek: The Motion Picture 1979 theatrical cut, 1982’s Star Trek II: The Wrath of Khan, 1984’s Star Trek III: The Search for Spock and 1986’s Star Trek IV: The Voyage Home — were released on 4K in a boxed set last year. For this new round of re-releases, each is included on 4K and Blu-ray in a new six-movie collection, and are also being released as individual 4K discs. So the 4K newcomers are 1989’s Star Trek V: The Final Frontier and 1991’s Star Trek VI: The Undiscovered Country.

The six-movie collection includes two separate cases: a seven-disc case for the 4K discs, and an eight-disc case for the regular Blu-ray versions; the extra Blu-ray is the bonus disc for Star Trek: The Motion Picture — The Director’s Cut.

The disc releases for Star Trek: The Motion Picture — The Director’s Cut are covered in a separate review here.

The six-film set includes a total of five discs for Star Trek: The Motion Picture — the director’s cut on both 4K and Blu-ray, the theatrical cut on both 4K and Blu-ray, and the director’s cut Blu-ray bonus disc. (This version does not include the 1983 television edit, which is exclusive to the 4K disc of the theatrical cut in the new “Complete Adventures” boxed set of the 1979 film).

The included Blu-rays are remastered versions of the films, not repackaged Blu-rays from earlier releases, though the bonus features are the same. The menus have been changed to feature the poster art for the films. As with previous Blu-rays, the Star Trek II discs offer both the theatrical and director’s cuts.

Aside from the director’s cut of the first film, the most notable addition is director Nicholas Meyer’s extended cut of Star Trek VI, which adds about four minutes of footage back in, among other minor tweaks. Like the 1983 version of the first film, the extended version of Undiscovered Country was the only one available for years on home video (on VHS). It’s most notable for the revelation that an assassin in the film was a human posing as a Klingon, which included a line specifically pointing out differences between the color of human and Klingon blood. Klingon blood is presented in this film as pinkish-purple, expounding on a continuity rift with the rest of the franchise where Klingon blood was depicted as red.

The extended version is available only on the Star Trek VI 4K disc; the regular Blu-ray is just the theatrical cut.

One notable exclusion from this new re-release is the Blu-ray bonus disc from the “Star Trek” 50th anniversary boxed set that offered additional featurettes about some of the films. Those could have been ported over to the new discs of their respective films, or the disc could have been added, but it was not to be. Fans wanting to have that extra content will need to hold onto that disc, or track down the boxed set if they don’t already have it (containing the original live-action and animated “Star Trek” series as well as the six movies on Blu-ray, the collection runs for about $200 online).