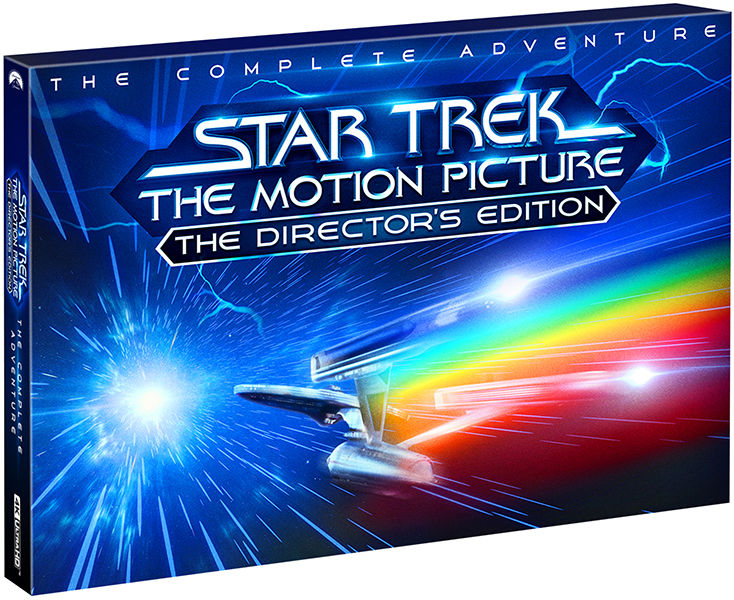 The fully remastered Star Trek: The Motion Picture — The Director’s Cut finally arrives on HD disc in a nifty boxed set that also includes previous versions of the film, some solid bonus materials.

An extensive review of the remastered film and its history are available here from when the director’s cut debuted in 4K on Paramount+ earlier this year.

Director Robert Wise’s film that brought the crew of the Enterprise to the big screen looks and sounds just as stunning on 4K disc, which offers a few viewing options not available via streaming.

The standard Blu-ray and 4K releases for the director’s cut include the film and commentary on one disc, and a bonus disc of extras (which is a regular Blu-ray Disc for both the 4K and Blu-ray versions).

The movie is presented with two audio commentaries as well as a text commentary offering trivia and other information about the film.

The first audio commentary is from the 2001 DVD release of the director’s cut and features Wise, visual effects artists Douglas Trumbull and John Dykstra, composer Jerry Goldsmith and actor Stephen Collins. It’s presented as a compilation of interviews, not a group discussion. Wise gets the most airtime and really delves into his intentions for the film and how they came up short originally.

The second audio commentary is a newly recorded group discussion with David C. Fein, Mike Matessino and Daren R. Dochterman, who led the 4K restoration efforts, and is a fun listen since they’re also big fans of the film.

Another audio option is an isolated track of Jerry Goldsmith’s beautiful music for the film. Since so much of the film involves immense visual effects sequences (and characters reacting to them), just the score on its own is almost enough to tell the story. Given how film’s main theme went on to be used for “Star Trek: The Next Generation,” it has over time become as much associated with “Star Trek” than the music from the original series. Interestingly, the music track seems to have sourced audio from the scoring sessions, as the scenes begin with an announcement of which cue the orchestra will play.

The bonus disc includes a great eight-part documentary, running 48 minutes total, about the creation of the director’s edition and how it was ultimately restored to 4K after a 20-year wait. The disc also includes new presentations of deleted scenes, effects tests, costume tests and computer display graphics, as well as a ton of legacy bonus materials from the original DVD.

The “Complete Adventures” collector’s set includes the 4K movie disc and the Blu-ray bonus disc, plus a third disc of the original theatrical cut in 4K.

As a special treat, this 4K disc of the theatrical cut also includes the 144 “Special Longer Version” of the movie that is essentially the extended version created for ABC in 1983 (running 12 minutes longer than the theatrical cut and eight minutes more than the director’s cut). The longer version has also been cleaned up for 4K, including finishing previously incomplete visual effects — most infamously, the scene of Capt. Kirk leaving the airlock in a spacesuit in which the surrounding soundstage is clearly visible. The scene is now complete thanks to digital effects, though there’s still a continuity gaffe as Kirk’s spacesuit is different from the one he’s wearing a few minutes later (which is why the scene was originally cut in the first place — it’s a remnant of a previous iteration of the scene that was reworked because the visual effects were too complicated). The unaltered version of the scene is offered as an extra.

For many fans, the ’83 cut was how they first saw the movie, as after the television airing it was the only version released on VHS for several years. The added scenes were released on DVD only as deleted scenes, so finally having it available in its full configuration on disc offers quite a dose of nostalgia, even if it isn’t the best way to experience the story. Comparing the three versions, however, does offer some interesting insights on the process of editing a film into its best presentation.

The special longer version is included on disc only in the “Complete Adventures” set; it’s not available with any of the standalone releases of the director’s or theatrical cuts, or the new 6-film 4K boxed set.

The theatrical cut comes with a previously available audio commentary from a slew of “Trek” experts, plus the isolated score.

The “Complete Adventures” set comes in an outer sleeve containing hardcover slipcase that features a fold-out cutaway map of the Enterprise, with slots to house the discs. The slipcase also has a reformatted note from Wise originally from the 2001 DVD, plus a pocket that contains a booklet of production art and a bevy of collectibles, including a mini-poster, reproductions of promotional photos from the film, and stickers.