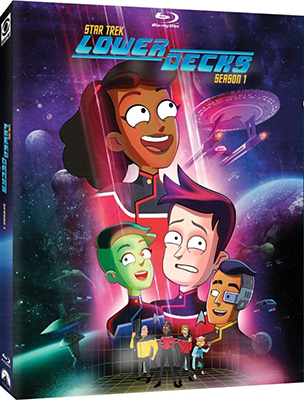 A glimpse into the lighter side of “Star Trek,” “Lower Decks” offers a comedic take on the franchise, using animation in the vein of “Rick and Morty” to present the adventures of the kinds of crew members who usually don’t get much screen time.

The series borrows its concept and name from an episode of “Star Trek: The Next Generation” that similarly focused on the lives of ordinary Starfleet officers serving on the lower rungs of the chain of command. It is set aboard the U.S.S. Cerritos, which itself is sort of a second-tier starship, sent in to clean up after better-known ships such as the Enterprise have their fun.

Though set in the “Star Trek” universe, the show is as much a parody of the franchise’s tropes as it is an addition to the canon. The animated aesthetic lets it cheat a bit in that regard, as it gets away with a perspective that would be hard to accept from a live-action “Trek” series. This is essentially “Star Trek” turning a satiric lens on itself much in the same way “The Orville” can only do as an homage.

“Lower Decks” is the brainchild of Mike McMahan, who wrote and produced for “Rick and Morty” and brings much of that sensibility here. The 10 episodes of the first season are peppered with references to earlier “Trek” series, including a number of obscure references to the 1970s animated “Trek” series. The series presents its main characters as essentially fans of ships such as the Enterprise, essentially making them in-universe “Star Trek” fans who get to make fun of the canon even as they actively play around its edges. The meta-commentary reaches its peak in the ninth episode, which is basically just a spoof of “Star Trek” movies, from horn-heavy music to a saturation of lens flares a la J.J. Abrams, presented within the world of the show through the holodeck.

While it’s hard to take the episodes too seriously as legitimate “Star Trek” plots, many of the resultant jokes can be rather funny, particularly to “Trek” fans who have enough knowledge of the franchise to appreciate them. To outsiders, the show would probably seem more like a wannabe “Futurama.” Still, it’s the best “Trek” series of the so-called new era that includes “Discovery” and “Picard,” which isn’t saying much.

The Blu-ray and DVD editions of the series offer about two hours of behind the scenes material, the bulk of which are presented under the “Lower Decktionary” banner. In total, this is a 10-part documentary that runs about an hour — or, at least, it would be if it were presented in a more logical manner, to borrow a phrase from the Vulcans. Each part of “Lower Decktionary” is presented as a bonus feature with a particular episode — though more often than not the topics reflect the series as a whole and might point to that episode as an example. Also, the video quality of these featurettes is spotty at best, likely owing to editing together interviews from the cast and production team members that was culled from Zoom videos during the pandemic.

There are two additional standalone featurettes. The 24-minute “Faces of the Fleet” focuses on the development of the characters, while the seven-minute “Hiding in Plain Sight” discusses several of the references built into the show.

A couple of the episodes also include deleted sequences in animatic form (sketches rather than finished animation), while a full-length animatic version of the first episode also is available.

Rounding out the extras is a fake trailer for the fake movie at the center of episode nine.