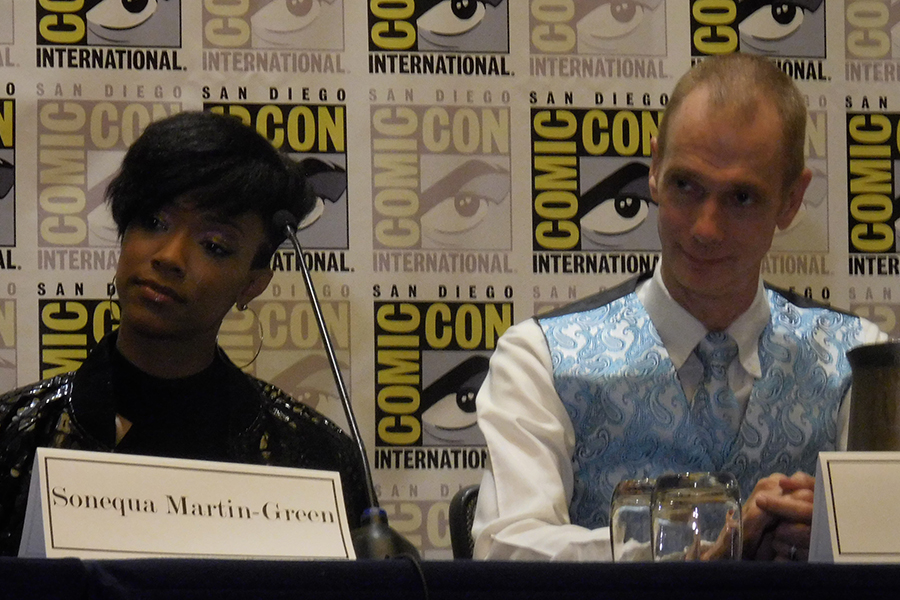 The cast and producers of the CBS All Access series “Star Trek: Discovery” said the second season might offer a bit more humor, but that doesn’t mean the characters won’t continue to face serious challenges.

The team ventured to the 2018 San Diego Comic-Con International July 20 to premiere the trailer for the upcoming season and to discuss what fans should expect when it arrives on the streaming service in 2019.

“I feel like going into the season we found our legs, so there’s just an extra level of confidence and clarity and spaciousness,” said Anthony Rapp, who plays engineer Paul Stamets.

The season adds Anson Mount to the cast as Capt. Christopher Pike, a character from the original 1960s “Star Trek” series who takes over Discovery to investigate a new threat to the galaxy.

“I think tonally it’s going to be a more buoyant season even though there are episodes that are very serious and intense,” said executive producer Alex Kurtzman. And we’ll see in the first episode that there’s more balance between some of the humor that you’d see on the original series and the high stakes of the more ominous episodes.”

Kurtzman, who directed the season two premiere, announced that in addition to the new season will be “Star Trek: Short Treks,” a series of four 10- to 15-minute standalone stories to roll out monthly beginning this fall.

Kurtzman said it’s fun to introduce some classic elements to a series that has raised eyebrows among viewers for how much it seems to deviate from the established canon.

“We’re constantly challenging ourselves in the writers room with how can we push really hard against the edges of what canon is without breaking it,” Kurtzman said. “And that means things like doing the spore drive, which obviously never existed before in ‘Star Trek.’ And why did Spock never mention his sister? These are huge questions. And as we sync up with canon we will be answering these questions, and I think the key for us is to do it in a way that both feels memorable and a little surprising. And hopefully by the time we get to the end of the season you will understand why all of those things have never been discussed.”

Kurtzman said continuing a franchise with a notoriously intense fanbase as “Star Trek” has is a challenge in the Internet age, when seemingly everyone online is trying to second-guess every detail on the show.

“We always feel the pressure and responsibility to deliver on Star Trek, and if we ever stop feeling that then we shouldn’t be doing it,” Kurtzman said. “I think everybody here at this table recognizes what a big deal this is, and recognizes particularly what a big deal it is right now in this moment, and how critical Star Trek is for all of us. So we feel a tremendous responsibility … to put something into the world that makes the world better.”

“So many of us behind the scenes are approaching everything as fans of this kind of storytelling where you’re turning over cards, and I think for us it’s just a joy to come up with a story we’re all excited about,” said executive producer Heather Kadin. “We don’t worry about if the fans will guess the plot twists ahead of time, and even if they do, well, we’re still in on it and we’re still loving it so we’re just hoping the fans feel the same way.”

Added Wilson Cruz, who plays Dr. Culber: “Also it’s kind of a great problem to have a fandom that cares so much and so deeply about the details of what you’re doing that they take time to share thoughts and their feelings about it. Isn’t that what we all want? Somebody who’s so engaged and so immersed in our world that they appreciate it at that level.”

Martin-Green said it’s a privilege to work on a show with the legacy and message that “Star Trek” represents.

“If I had to speak to my 12-year-old self I would say that one day you will tell a story that has already changed people’s lives and that will continue to change people’s lives, through love, and love in all its facets, love in acceptance, love in representation, love in union, that’s really what we’re doing here in what we’re exploring in this story of universality,” Martin-Green said. “It’s really a story of love. I would say that’s what you have to look forward to.”