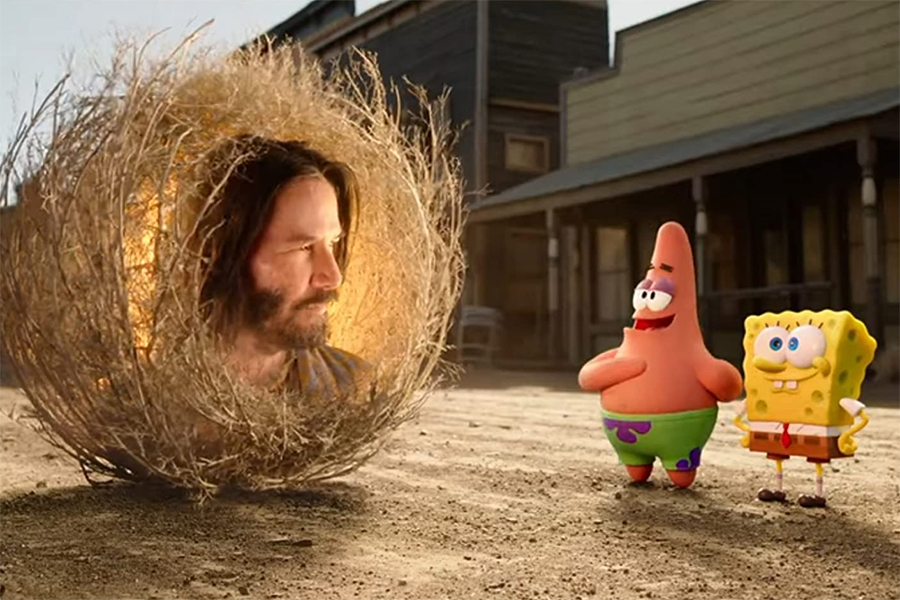 Paramount’s animated The SpongeBob Movie: Sponge on the Run topped both the Vudu and FandangoNow charts the week ended March 7.

Available as a premium VOD rental March 4 (and also to Paramount+ streaming subscribers), Sponge on the Run is a CGI-animated adventure with live action elements. In the film, SpongeBob’s beloved pet snail Gary goes missing in a plot hatched by Plankton to get the Krabby Patty recipe, and he and his friend Patrick head to the Lost City of Atlantic City to retrieve him. It features appearances by Keanu Reeves and Snoop Dogg, among others.

Available for early digital purchase Feb. 16, Monster Hunter, based on the video game franchise, dropped to No. 2 on both charts. It stars Milla Jovovich as Capt. Artemis, whose unit is caught in a sandstorm that transports them to a world ruled by dangerous and powerful monsters. As they fight to survive, they encounter the mysterious Hunter (Tony Jaa), whose unique skills allow him to stay one step ahead of the powerful creatures.

The Universal/DreamWorks animated sequel The Croods: A New Age took the bronze on both charts. It’s a followup to 2013’s The Croods that finds the prehistoric family facing a new challenge when they encounter a walled-in paradise created by the sophisticated Betterman family. As they try to coexist, the differences between the two families escalate into a full-blown feud, until a new threat forces them to work together. The voice cast includes Ryan Reynolds, Emma Stone, Nicolas Cage, Peter Dinklage, Kelly Marie Tran and Leslie Mann.

Warner Bros.’ Wonder Woman 1984, which was released Feb. 12 as a 48-hour PVOD rental after debuting on WarnerMedia’s SVOD service HBO Max, took the No. 4 spot on the Vudu chart (No. 5 on Vudu). A sequel to 2017’s Wonder Woman, the follow-up reunites director Patty Jenkins with star Gal Gadot and moves the setting from World War I to 1980s America, where the DC Comics heroine confronts the challenges of the Cold War.

STX Films’ The Mauritanian, which recently earned Jodie Foster a Golden Globe for Best Supporting Actress, entered the FandangoNow chart at No. 4 (No. 9 on the Vudu chart). It debuted as a premium VOD rental March 2. Based on the book Guantanamo Diary by Mohamedou Ould Slahi, it’s the true story of Slahi’s fight for freedom after being detained and imprisoned without charge by the U.S. Government for years.

Lionsgate’s horror reboot Wrong Turn, available for digital purchase Feb. 23, came in at No. 5 on the Vudu chart (No. 8 on the FandangoNow chart). It follows a group of friends who set out to hike the Appalachian Trail. Despite warnings to stick to the trail, the hikers stray off course — and cross into land inhabited by The Foundation, a hidden community of mountain dwellers who use deadly means to protect their way of life.

Vudu’s top 10 titles for the week ended March 7, in terms of revenue, were:

FandangoNow’s top 10 titles for the week ended March 7, in terms of revenue, were: