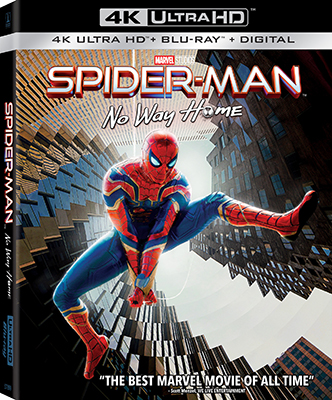 The story of Spider-Man: No Way Home hinges on a plot device that could have been one of the greatest surprises in cinematic history. Instead, it was one of the worst-kept secrets in Hollywood that previous Spider-Man actors Tobey Maguire and Andrew Garfield would reprise their roles alongside current Spider-Man Tom Holland to fight a variety of villains from all the “Spider-Man” movies since the first film in 2002.

It wasn’t as if Sony’s marketing department didn’t try to keep it quiet. Images of the multiple Spider-Men were omitted from trailers, and Garfield resorted to blatantly lying in interviews in which he said he wasn’t involved, despite all the widespread rumors to the contrary, and in some cases photographic evidence.

Of course, the momentary shock value for such a reveal can only add so much to the viewing experience, and the film’s immense box office fortunes don’t seem to have suffered in the least. And knowing of the eventual Spidey super team-up doesn’t detract at all from the emotional resonance that elevates Spider-Man: No Way Home into more than just a fantastic superhero action movie.

The film is the 27th entry in the Marvel Cinematic Universe, and picks up immediately following the events of 2019’s Spider-Man: Far From Home, as Peter Parker (Tom Holland) is publicly identified as being the masked webslinger.

As his life spirals out of control due to people knowing that he’s Spider-Man, Peter asks his Avengers cohort Dr. Strange (Benedict Cumberbatch) to reset everyone’s memories so they don’t remember his secret anymore. But the spell becomes unstable and breaks down the barriers between different realities, drawing in villains such as Green Goblin (Willem Dafoe), Dr. Octopus (Alfred Molina) and Sandman from the Sam Raimi-directed movies, and Electro (Jamie Foxx) and the Lizard from the “Amazing Spider-Man” films.

Rather than send them back to their universes only to die fighting their versions of Spider-Man, Peter endeavors to cure them first, a decision that backfires and results in profound tragedy.

However, the spell also brought Maguire’s and Garfield’s Spideys from those universes, giving Holland’s Spider-Man the allies he needs to stop the team of villains from doing more damage. It feels a lot like one of those “Doctor Who” anniversary specials in which previous versions of the Doctor joined the current one for a grand adventure.

The film works as a celebration of Spider-Man and his legacy in film, tying together the entire franchise in a way that not only continues the development of Holland’s Spider-Man, but also enriches the story arcs of Maguire’s and, especially, Garfield’s.

Spider-Man: No Way Home looks amazing, with several instantly iconic sequences, and seamless visual effects that really make it seem as if Molina and Dafoe were just plucked out of the earlier movies and placed into this one.

Another standout is the musical score by Michael Giacchino, who not only continues to develop the progression of his themes from the first two MCU Spidey movies, but gets to reuse his Dr. Strange themes as well. As if those weren’t enough, he also incorporates some of Danny Elfman’s themes from the Maguire films, and the late James Horner’s wonderful theme from The Amazing Spider-Man. It’s leitmotif on overdrive.

The Blu-ray includes a solid hour-and-a-half of bonus materials, including seven behind-the-scenes featurettes. The six-minute “A Spectacular Spider-Journey With Tom Holland” tracks the journey of its star since he joined the MCU, while the seven-minute “Graduation Day” looks at the evolution of all the recurring characters. The five-minute “Enter Strange” examines the wizard’s role in the story, while the six-and-a-half-minute “Action Choreography Across the Multiverse” looks at the film’s stunt work. The eight-minute “Realities Collide, Spiders Unite” looks at how the film’s legendary team-up came to be, while the seven-minute “Weaving Jon Watt’s Web” focuses on the director’s experiences making the three MCU “Spider-Man” films.

The best extras are two panel discussions with the cast. The nine-minute “The Sinister Summit” features the villains of the film — Dafoe, Molina and Foxx. But the main event is the seven-and-a-half-minute “A Meeting of the Spiders” with Holland, Garfield and Maguire discussing their camaraderie.

A nearly five-minute featurette informs viewers of many of the references to previous Spider-Man films and comics that have been layered into the film.

Another fun inclusion are three in-universe story videos about Spider-Man from TheDailyBugle.net, running a total of about four minutes.

There are also two videos comparing the stunt previsualization with the final result, running three-and-a-half-minutes.

A section of promotional materials includes three short clips: Holland and co-star Jacob Batalon taking a lie detector about their experiences on the film, running two minutes; a minute clip of Holland’s press tour to Paris; and a minute of the filmmakers raving about the benefits of filming in the state of Georgia.

Rounding out the extras is a four-minute bloopers/gag reel.

In the 4K combo pack, all the bonus materials are on the Blu-ray disc. The 4K disc doesn’t include any extras.